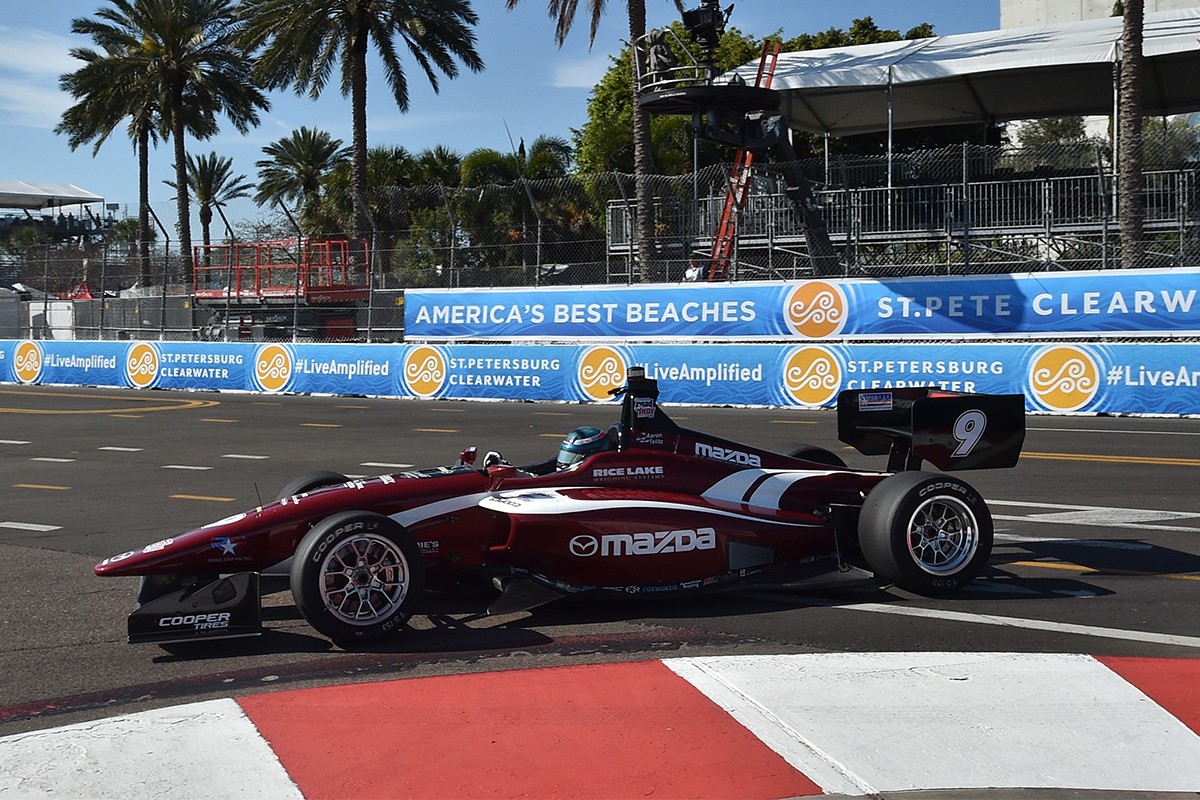 PETERSBURG, Fla. – The season-opening Grand Prix of St. Petersburg kicked off today with practice and qualifying for four of the six races which comprise the start of a new campaign for the Mazda Road to Indy Presented by Cooper Tires.

A dramatic qualifying session for Indy Lights Presented by Cooper Tires, the highest rung on the acclaimed open-wheel development ladder which offers Mazda Scholarships to enable talented drivers to reach all the way from the grassroots of the sport to the Verizon IndyCar Series, ended with Aaron Telitz marking his first Indy Lights start with pole position for Belardi Auto Racing.

Telitz, 25, from Birchwood, Wis., who is stepping up after winning last year’s Pro Mazda Championship Presented by Cooper Tires, jumped to the top of the timing charts moments before young Mexican Pato O’Ward ended his session in the barriers at Turn Eight. Ironically, Telitz and O’Ward had been teammates last year in Pro Mazda – and had shared one victory apiece on the streets of St. Petersburg.

O’Ward, 17, from Monterrey, Mexico, had posted the fastest time in practice this morning for Team Pelfrey and also set the pace prior to Telitz’s fine lap of 1:07.5844. Even worse, as a penalty for causing a red flag stoppage, O’Ward was penalized with the loss of his fastest time, dropping him from second on the grid to ninth in the closely packed field.

Kyle Kaiser (Juncos Racing), from Santa Clara, who won the pole in 2016, will start second for the opening race of the weekend, the Mazda Grand Prix of St. Petersburg Presented by Cooper Tires, which will start at 5:10 p.m. EDT tomorrow afternoon.

Qualifying for Race Two will take place at 7:55 a.m. tomorrow.

USF2000 Champ Martin Fastest in Pro Mazda
Anthony Martin, from Kalgoorlie, Australia, will start on pole for the Hi-Tide Kids on Track Grand Prix of St. Petersburg, Round One of the Pro Mazda Championship Presented by Cooper Tires. Martin, 22, who is stepping up to Pro Mazda after winning last year’s USF2000 championship, set the fastest time at 1:13.6718 for Cape Motorsports, edging out Brazilian Victor Franzoni (Juncos Racing) by a scant 0.012 second.

Franzoni had been fastest in the first practice session this morning at 1:14.1486.

TJ Fischer, based in Los Angeles, will start third for Team Pelfrey ahead of teammate Carlos Cunha, from Campinas, Brazil, and Californian teenager Phillippe Denes for World Speed Motorsports.

Qualifying for Race Two, the Allied Building Products Grand Prix of St. Petersburg, will take place at 7:30 a.m. tomorrow, with the green flag slated for 4:30 p.m. on Sunday.

Megennis, Thompson Earn Poles for USF2000 Double-Header
A new era for the Cooper Tires USF2000 Championship Powered by Mazda kicked off today with qualifying for the first two races of the new season which will take place tomorrow on the streets of St. Petersburg.

The brand-new Tatuus USF-17 looks set to provide some sensational action this year, as evidenced by the closeness of the times in each of the two 20-minute sessions.

Last year’s Rookie of the Year, Robert Megennis, was first out of the blocks yesterday for Team Pelfrey, posting the fastest time during a 30-minute period of practice that was punctuated by a variety of incidents. The teenager from New York, N.Y., maintained that form this morning on a slightly reconfigured race track, stopping the clocks in 1:15.3708 (85.975 mph) to secure pole position for the Hi-Tide Boats Lifts Grand Prix of St. Petersburg – and the first championship point of the 2017 campaign.

Dakota Dickerson (Newman Wachs Racing), from San Diego, Calif., and Kaylen Frederick (Team Pelfrey), from Potomac, Md., will round out the top five starters. The top 11 qualifiers were all blanketed by less than one second.

The race is set for 8:40 a.m. tomorrow, with the green flag due to be waved by Tatuus Race Cars Director Gianfranco DeBellis.

Qualifying for Race Two, the Allied Building Products Grand Prix of St. Petersburg, which is slated for a 2:00 p.m. start tomorrow, ended with Parker Thompson, from Red Deer, Alb., Canada, atop the charts for the new Exclusive Autosport team. Thompson, who finished a close second in the 2016 title-chase, set an identical time – 1:15.3708 – to that set earlier by Megennis.

Askew, who bounced back impressively from an incident on Thursday afternoon which caused damage to his Soul Red Tatuus, will start second for Race Two ahead of Dutch teenager Rinus VeeKay (Pabst Racing), Dickerson and Megennis.