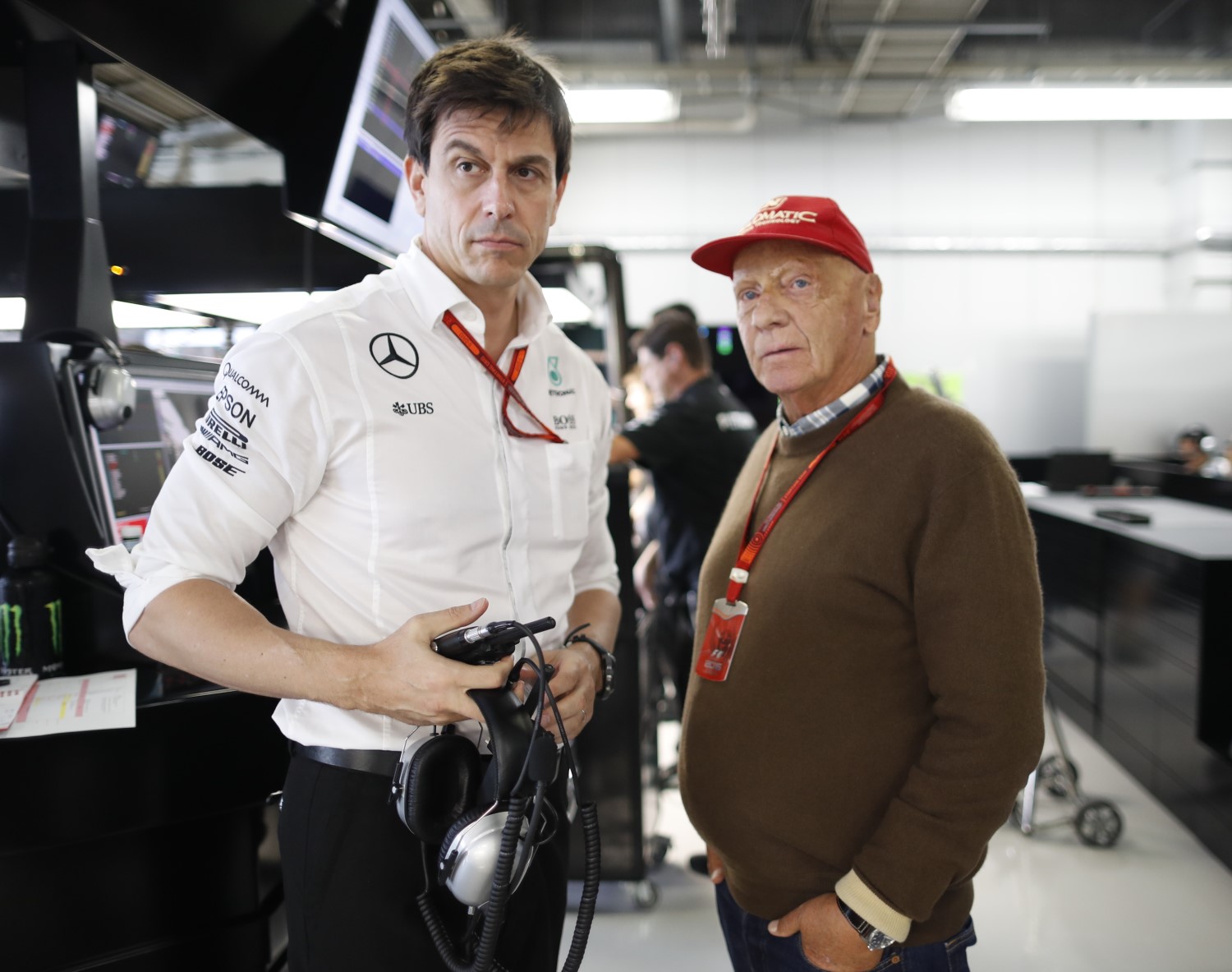 That is the view of Mercedes' team chairman and F1 legend Niki Lauda.

Finn Bottas was signed by Mercedes on a one-year contract for 2017, after world champion Nico Rosberg's shock decision to quit the sport.

"What I've seen so far is that Valtteri has closed to within two tenths of Lewis' qualifying performance," Lauda said at the Barcelona test.

"This is already very good," he told the German broadcaster RTL. "He lacks the experience that Lewis has so he can develop still further on the long runs.

"He has to work on everything, and he will," Lauda added. "But I am more than satisfied with his performance so far."

Bottas agrees that he is "close" to Hamilton.

"We have worked on different programs but sometimes I had the opportunity to compare the telemetry," said the Finn.

"So far it looks like we are very close, but it's only testing. However, based on what I saw, I have made progress."

Meanwhile, after Hamilton and Sebastian Vettel called each other's teams the "favorites" for 2017, Lauda has sided with his top Mercedes driver.

"We are two tenths from Ferrari," said the Austrian.

Told that Vettel has called Mercedes the favorites, Lauda insisted: "No. It's Ferrari. They're doing a fantastic job."

And at present, it seems clear that Red Bull is clearly the third force.

"We haven't shown yet that we can be on Ferrari's pace," admitted Daniel Ricciardo. "It looks like they're close to Mercedes' pace, or on it already."

But Bottas thinks it's too early to make clear statements about the pecking order.

"Ferrari looks very strong," he said, "and Red Bull may surprise — as well as other teams. It will be a close fight.

"At the moment, we cannot consider ourselves favorites."

Bottas must get up to speed quickly – Wolff

(GMM) Toto Wolff says Valtteri Bottas does not have long to get up to speed in 2017.

In Barcelona, F1 legend Lauda said that while Bottas is only two tenths behind Hamilton on qualifying pace, the 27-year-old is further off on a long run.

Wolff said: "Valtteri does not have a lot of time to prove he can be at Nico's level, to perform well against Lewis Hamilton and help the team keep up the development direction and speed in the car.

"It is clear that Valtteri needs to learn how to swim quickly."

Wolff also agrees with the growing paddock sentiment that Ferrari is looking set to be a strong challenger for the title in 2017.

"We take them seriously," said the Austrian.

"When the rules change it is an opportunity for everyone."

Ahead of the works Anglo-Japanese collaboration's third consecutive season, it is clear patience is running out as Honda struggle once again to supply a competitive and reliable power unit.

But amid the situation, rookie Vandoorne sounds calmer than his veteran teammate Alonso.

"The last thing we are allowed to do is be frustrated and do nothing. We are McLaren, one of the best teams that has already solved tough situations in the past," he said.

As for Alonso's obvious frustration this week, Vandoorne said: "Fernando and I talk a lot and we agree that we cannot be frustrated, we have to work together to go forward and improve.

"I don't think our relationship has changed," he added. "We are not really in an ideal situation, but we are working hard for the team, our driving style is similar and we both have the same comments about the car, which is good for developing in the right direction.

"I would have liked a start with more laps, but in F1 you can't choose, it is as it is," said the Belgian.

At the same time, the 24-year-old said he feels ready for Australia.

"100 per cent," said Vandoorne. "I prepared for Bahrain 2016 was much less preparation.

"I am confident with the car, I can attack as I want to. Hopefully we can have some new parts in Melbourne and improve.

"I'm still very happy that I can drive an F1 car. It's only my first full season. Ok, we currently have some problems, but it hasn't affected my confidence in any way."

(GMM) Pascal Wehrlein has explained the black patch at the front of his helmet in Barcelona.

Eagle-eyed observers have noticed that the German has blacked out the prominent Mercedes star from just above his visor.

Wehrlein is a Mercedes-backed driver, but he has switched from Manor to Ferrari-powered Sauber for 2017.

When asked about the blacked-out Mercedes logo, he told Bild newspaper in Barcelona: "That was a decision by Toto (Wolff) and myself.

"Ferrari supplies engines to Sauber, I am also working with Ferrari people now, so I don't want any tension to arise," Wehrlein explained.

(GMM) Force India has asked its drivers to lose weight before Melbourne.

Up and down the pitlane, drivers have put on as much as 5-6 kilograms of muscle over the winter to prepare for the new cars' much higher G-forces.

But Force India is struggling with handling problems, and Germany's Auto Motor und Sport said one problem is that the team's 2017 car is overweight.

"We told them they should weigh 70 kilograms in Melbourne," said technical boss Andrew Green, referring to Sergio Perez and Esteban Ocon who both apparently weigh 72kg.

Deputy team boss Bob Fernley said the main problem is that the task of adjusting to vastly different regulations is harder for smaller teams like Force India.

"We're currently fighting for fifth place with Toro Rosso, Haas and Renault," he said. "Williams is too fast for us, but we're catching up. The season is long."

Villeneuve happy with 'new' F1
(GMM) F1 purist Jacques Villeneuve says he is happy with what he is seeing at the Barcelona test.

The 1997 world champion was one of the fiercest critics of the former technical regulations, characterized by fuel saving, degrading tires and low cornering speeds.

"What I've seen so far is simply great," the former Williams and Honda driver turned television pundit said in Barcelona.

"First of all, the cars look great. They're now big, proper formula one cars, just like they should be.

"But also how the tires work is remarkable. Before, the drivers could not keep attacking but you can see they are finally able to drive aggressively without thinking so much about the rubber," Villeneuve added.

"This also means fewer pitstops, which doesn't please everybody, but generally less stops will make the sport more understandable," he continued.

"The drivers can also attack more in the corners without destroying the tires, which should play into the hands of the best drivers."

The 45-year-old French Canadian also said it's good that the new tires will make the drivers "sweat more" in 2017 as laptimes tumble and G-forces rise.

"You can see it already with the problems the new drivers are having," Villeneuve told Sky Italia.

(GMM) Charlie Whiting has reportedly not joined a swathe of other Bernie Ecclestone-linked F1 personalities who have left the sport.

With Liberty Media sweeping into power, it is notable that along with Ecclestone's ousting, also now gone are the F1 supremo's long-time colleagues including Pasquale Lattuneddu and Herbie Blash.

Now, it emerges that Marcin Budkowski has taken over as the FIA's technical delegate, although Whiting – whose deputy is the much younger Laurent Mekies – remains the F1 race director and starter.

But rumors are circulating in the Barcelona test paddock that Whiting, 64, may soon 'retire'.

A report in Speed Week, however, insisted "the rumor is just a rumor, and Charlie Whiting is still there".

Ecclestone's friend and long-time business partner Flavio Briatore has revealed that he held a surprise dinner for the 86-year-old in London this week.

Photos on social media have emerged showing guests including Max Mosley, Niki Lauda, the princes of Monaco and Bahrain and many others greeting the Briton wearing 'Bernie' masks.

"Normally, if you invite 100 people, you have 60 who confirm they can attend because you are talking about people that are very busy or live thousands of kilometers away," said Briatore on Instagram.

"But everybody came to London," he revealed. "It was a kind of tribute to Bernie's career.

"He was not treated well by the new formula one bosses. People easily forget what this man created. It was a bit of a sad evening, but very beautiful."

Lewis Hamilton reckons Ferrari has been "bluffing" its way through pre-season testing so far, as the Italian manufacturer began to up its pace on the penultimate day.

Sebastian Vettel showed rapid speed on the Soft, Super Soft and Ultra Soft tires on Thursday morning, en-route to a best lap time of 1:19.024 with the purple-marked rubber.

He did so despite repeatedly backing off in the final sector, which included lifts on the pit straight, and ended the day three tenths clear of Hamilton, who used the same compound.

Vettel also put together impressive race stints on the Soft and Medium tires.

As he evaluated the pecking order, Hamilton said: "I think Ferrari are bluffing.

"I think they are a lot quicker than they are showing. They're very close to us. It's difficult right now to say exactly [which team] is quicker. But they are very close, if not faster.

"Whatever the case, I can't wait to go out and compete."

Hamilton's team-mate, Valtteri Bottas, is keen for Mercedes to fully understand the upgrades that it applied for this week's test, admitting that the outfit is not entirely happy yet.

"We're still finding out which of these parts are the best suited to our car and how exactly we can draw 100 per cent out of the package," said Bottas, who finished eighth overall, on Softs.

"Every day is still a massive learning curve for us and we've still got a lot of work to do to get it right.

"It's going to be a tight competition [at the first round of the season] in Melbourne so we need to make the most of our last day of testing tomorrow and maximize our mileage."

Bottas and Hamilton will again split running in the W08 on Friday.