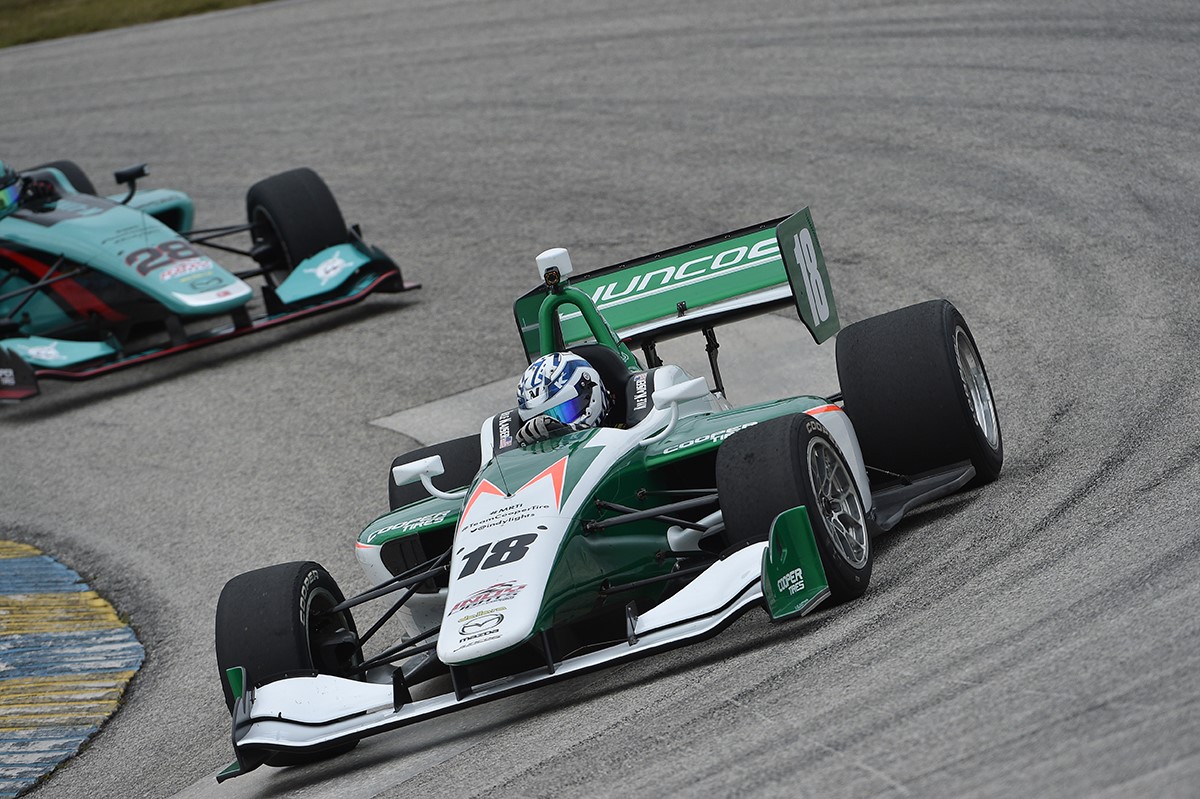 The eyes of the open-wheel auto racing world will be focused firmly on St. Petersburg, Fla., this weekend as the Verizon IndyCar Series and all three levels of the acclaimed Mazda Road to Indy Presented by Cooper Tires begin their new season on the challenging 1.8-mile, 14-turn downtown street circuit.

More than 50 ambitious drivers literally from around the globe will converge on the scenic waterside track, each and every one of them looking to make a strong start to their campaigns in pursuit of more than $3.5 million in scholarships and awards which will be up for grabs to assist in the graduation from the grassroots of the sport to the elite level in North America.

Testing Suggests Wide-Open Field for Indy Lights
Judging by the closeness of the lap times from last week’s Mazda Road to Indy Presented by Cooper Tires Spring Training Open Test at Homestead-Miami Speedway in South Florida, 2017 promises to be a spectacular season for Indy Lights Presented by Cooper Tires. A Mazda Scholarship valued at $1 million will be available to the driver who accumulates the most points from the 16 races on the third and final step on the open-wheel development ladder and will permit the champion to follow in the footsteps of the two most recent graduates, Spencer Pigot and Ed Jones, in guaranteeing at least a three-race deal in next year’s Verizon IndyCar Series, including the Indianapolis 500.

Less than a second blanketed 13 of the 15 drivers on the 2.21-mile Homestead-Miami road course last Thursday, while the entire field had been covered by a scant 0.6105 second when they tested three days previously on the facility’s 1.5-mile oval.

Andretti Autosport has particularly high expectations following the performances of the youngest driver in the field, 16-year-old Californian Colton Herta, and 2015 Cooper Tires USF2000 Championship Powered by Mazda winner Nico Jamin, from Rouen, France, who traded fastest times on both circuit configurations. Herta, the son of 1993 Indy Lights champion and two-time Indy 500-winning car owner Bryan Herta, will be making his return to North American competition with a new Andretti-Steinbrenner Racing partnership after two years in Europe. Andretti also will field cars for 2016 Atlantic Champion Ryan Norman, from Cleveland, Ohio, and series veteran Dalton Kellett, from Toronto, Ont., Canada, who was fastest in one of the road course tests last week.

“Most of the Steinbrenner family lives in the St. Pete area, so everyone will be out there," notes Herta. “The Yankees’ spring training facility is in Tampa Bay and I’m throwing out the first pitch at a game this week. It will be an important weekend for so many reasons. I’ve never driven at St. Pete before because I was too young to race in the USF2000 series in 2014. It’s one of my favorite tracks, it’s such an awesome backdrop. I am at a bit of a disadvantage because most of the other drivers have been there before, but they’ve repaved so hopefully that’s an equalizer. We were quick at the test last week so hopefully we have a good car going into the weekend."

Another Californian, Kyle Kaiser, also will be among the favorites. Kaiser, who celebrated his 21st birthday last weekend, qualified on the pole last year at St. Pete and notched a pair of podium finishes en route to third in the championship for Juncos Racing.

“I’m looking to put it on pole here again," declared Kaiser. “That’s the goal every weekend. I love that track. I understand they’ve put some new surfaces down so I’m looking forward to walking the track and getting a feel for it. Hopefully, it’s mostly the same because I was fast on it last year! It was a good start to my season there last year, so I would love to start it off the same way again."

Belardi Auto Racing has a point to prove, too. The Indianapolis-based squad won more races than any other team in 2016 but missed out on the championship. This year it will field cars for Uruguayan Santi Urrutia, who won the 2015 Pro Mazda Championship Presented by Cooper Tires and finished a close second in last year’s Indy Lights title-chase; fellow series veteran Shelby Blackstock; and rookie Aaron Telitz, from Birchwood, Wis., who succeeded Urrutia as Pro Mazda champion in 2016, earning a Mazda Scholarship worth $601,700 to step up to Indy Lights this year.

The 2016 championship-winning Carlin team will defend its crown with a four-car entry for Neil Alberico and Zachary Claman DeMelo, plus rookies Matheus Leist, from Brazil, who won last year’s BRDC Formula 3 Championship in England, and USF2000 veteran Garth Rickards, while Florida-based Team Pelfrey will enter Colombian Juan Piedrahita and Mexican teenager Pato O’Ward, who along with Telitz claimed a Pro Mazda win for the team at St. Petersburg in 2016.

The Mazda Grand Prix of St. Petersburg Presented by Cooper Tires will comprise one 35-lap (or 40-minute) race on Saturday and a 45-lap (or 60-minute) encounter on Sunday. In a change for 2017, each will have a dedicated 30-minute qualifying session.

Transition Year for Pro Mazda Attracts Solid Field
The Pro Mazda Championship Presented by Cooper Tires, the middle step on the Mazda Road to Indy Presented by Cooper Tires, is in the midst of a transition with an exciting new Tatuus-Mazda PM-18 equipment package to be introduced next year. Only seven cars attended last week’s Spring Training test at Homestead, but the obvious attraction of a $790,000 Mazda Scholarship to assist in the progression to Indy Lights for 2018 has led to several late additions which should ensure an intriguing start to the 12-race season at St. Petersburg.

Reigning USF2000 champion Anthony Martin, from Kalgoorlie, Australia, led the way at Spring Training for Cape Motorsports and will be seeking to become the first driver since Matthew Brabham in 2012 and 2013 to secure back-to-back Mazda Scholarships in USF2000 and Pro Mazda.

Opposition will stem chiefly from a trio of cars from Team Pelfrey which has guided Santi Urrutia and Aaron Telitz to consecutive Pro Mazda titles. After moving its base from Palmetto, Fla., to Indianapolis over the winter, Team Pelfrey remains focused on yet another crown after retaining TJ Fischer, from Vacaville, Calif., who topped the times in a couple of sessions during Spring Training, and adding Los Angeles-based Russian Nikita Lastochkin, who graduates from USF2000, and Brazilian F3 race winner Carlos Cunha.

World Speed Motorsports also displayed good speed at Spring Training with veteran Bobby Eberle, from Houston, Texas, and teenaged newcomer Sting Ray Robb, from Payette, Idaho. The pair will be joined this week by another youngster, Phillippe Denes, from Carmel, Calif., who marked himself as a man to watch by claiming two wins and a dozen podium finishes in last year’s F1600 Championship Series.

Max Hanratty, from Milwaukee, Wis., has joined ArmsUp Motorsports after graduating from USF2000 and finishing fourth in the 2016 IMSA Mazda Prototype Lights Presented by Cooper Tires.

Pittsburgh, Pa., native Matt Machiko is another to be moving up the ladder after sweeping the board last year in SCCA Formula Mazda competition.

A Juncos Racing driver announcement is expected on Wednesday.

Askew Heads High-Quality field of New Tatuus USF2000 Cars
A brand-new Mazda-powered Tatuus USF-17 chassis has breathed fresh impetus into the Cooper Tires USF2000 Championship Powered by Mazda, which has been providing opportunities for youngsters to gain their first taste of professional open-wheel racing for close to 30 years. The sleek, carbon fiber monocoque cars have attracted several new teams to the fray, although at Spring Training last week the ultra-successful St. Petersburg-based Cape Motorsports team once again set the pace with talented newcomer Oliver Askew. After several years of trying to break into car racing following a hugely successful career in karting, Askew, 20, from Jupiter, Fla., suddenly has sprung to prominence after winning, firstly, a Team USA Scholarship last year, which allowed him to display his talents in Europe, then clinching the inaugural Mazda Road to Indy USF2000 $200K Scholarship Shootout. Askew was fastest in five of the six sessions that comprised Spring Training, although a hint of the level of competition he will face came in the final period when no fewer than 15 cars were blanketed within just one second.

“I couldn’t be more excited to start my first full season in car racing and to start my first street race," says Askew. “It’s going to be so cool to be in the same paddock as the Verizon IndyCar series. There will be a lot of buzz, but I must keep my head down and keep focusing on what’s important."

Likely rivals this weekend to Cape Motorsports, which has won six consecutive USF2000 titles, will include Newman Wachs Racing, which is making a welcome return to the sport seven years after winning the Atlantic Championship. Dakota Dickerson, from San Diego, who won both a Team USA Scholarship and a Skip Barber/Mazda Scholarship in 2015, and rookie Andre Castro, a fellow Skip Barber grad from New York, N.Y., both proved fast at Homestead.

Live timing and live streaming of all sessions will be available on the respective series websites, indylights.com, promazda.com and usf2000.com, as well as on indycar.com and the Road To Indy TV App.