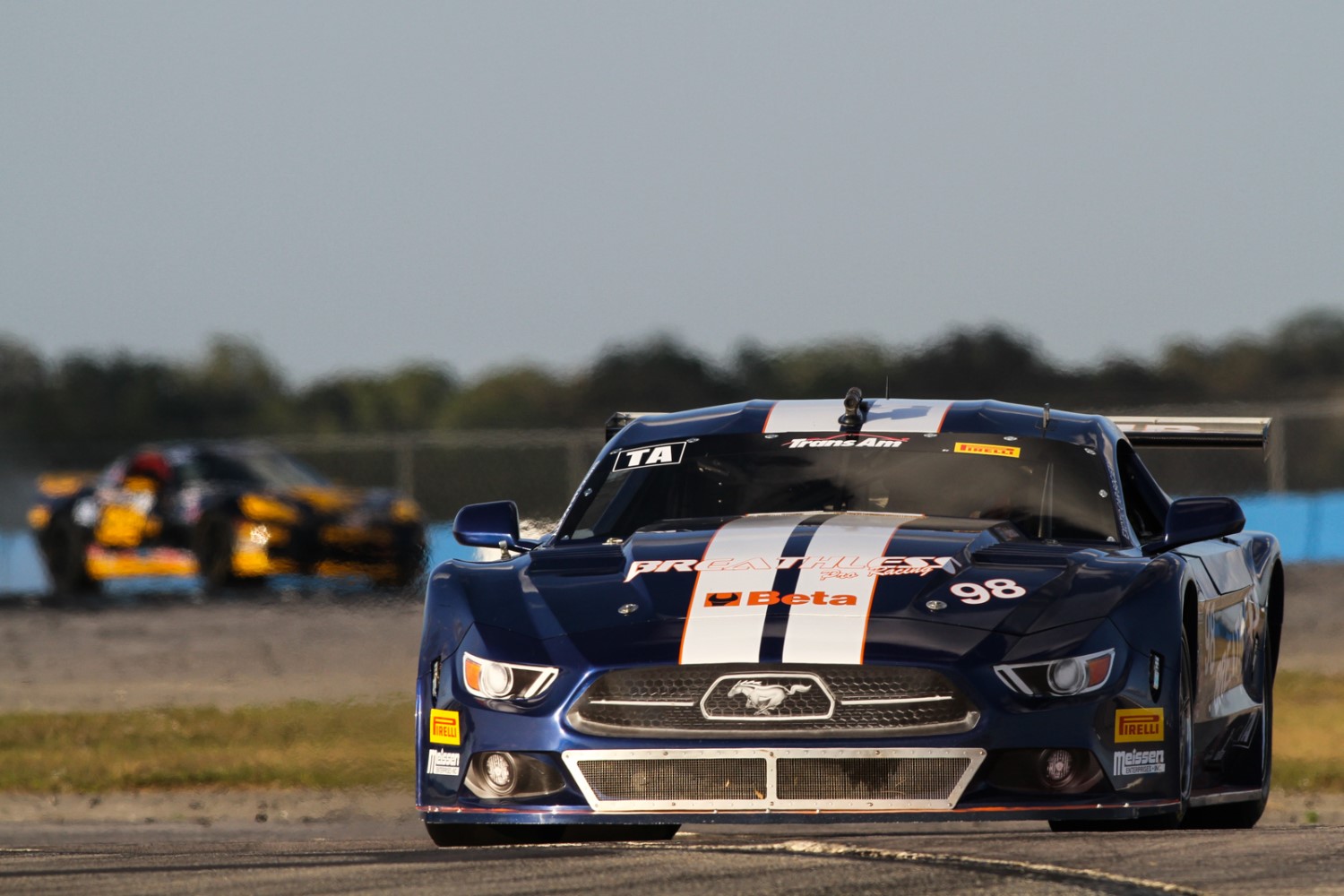 Ernie Francis, Jr., and Dillon Machavern captured their respective class poles in today's qualifying sessions at Sebring International Raceway as the Trans Am Series presented by Pirelli continues its opening weekend of the 2017 Trans Am Championship. These qualifying sessions also stood as the first Trans Am sessions on the Series' new Pirelli P Zero tires now featured across all classes.

A new car. A new class. The same Ernie Francis, Jr. That was the refrain throughout the TA class qualifying session as the three-time TA4 class champion participated in his first-ever TA qualifying session, a session that resulted in a resounding 2.00.981 lap time around the 3.74-mile Sebring circuit. As a result, Francis will start on pole for tomorrow's 100.98-mile multi-class TA, TA3 and TA4 race-all this with barely 20 laps under his belt prior to the session in the brand new No. 98 Breathless Pro Racing/ Beta Tools Ford Mustang.

“It was our first weekend racing our new TA car, and we are on pole for the race," said Francis. “We couldn't be happier with that, the car and crew. It's just a great day and a great weekend overall. We have made so many leaps and bounds and are really excited to see how the rest of the weekend is going to go."

Francis was followed in the session by 2016 Rookie of the Year Vinnie Allegretta, driver of the No. 41 TA Sights & Sounds Chevrolet Corvette, with a time of 2:01.659, tying his career best qualifying position. Unlike Francis, Allegretta has never tasted a Trans Am victory-his career best finish stands as second place at VIRginia International Raceway last season.

“I am just really happy to be back in Trans Am for the 2017 season," said Machavern. “The Mike Cope crew made an awesome race car today; they really make my job easy. The new Pirelli tires really make these cars fast. I think I broke the track record by almost a second – which is incredible. I really need to thank the Mike Copy guys and my parents for giving me such a great opportunity to come out here and do this."

Now Machavern will be faced with the inevitable task of staying ahead of the rest of the 28-car TA2 field, including what stands as an extremely tight TA2 top five. The two positions behind Machavern also hold the winners of the past four TA2 races at Sebring, Gar Robinson and Cameron Lawrence. Robinson, in the No. 74 Pura Vida Tequila/ 74 Ranch Resort Chevrolet Camaro and the victor of the 2016 race, will start alongside Machavern after turning a 2:07.241 lap. Cameron Lawrence, Sebring class victor in 2013, 2014 and 2015, now in the No. 19 Class Auto Centers Chevrolet Camaro, qualified third with a time of 2:07.431.

Fourth and fifth in TA2 qualifying were defending TA2 champ Tony Buffomante, in the No. 34 Best Line Superior Lubricants Ford Mustang, and Shane Lewis, driver of the No. 72 Pura Vida Tequila/ 74 Ranch Resort Ford Mustang, with times of 2:07.756 and 2:07.758, respectively.

The TA3 class pole was captured by Andrew Aquilante, in the No. 32 Phoenix Performance/ Hawk/ Penske Chevrolet Corvette, who turned a 2:09.355 lap, shattering the pervious qualifying track record of 2:13.635 for his second Trans Am pole in only his third career start. If he can hold first position, as he has in every TA3 session this weekend, it will stand as his third Trans Am victory.

“Qualifying went pretty well," said Aquilante. “It was cool to qualify as the sun was going down – that is a classic Sebring feel. The car worked well. The team had a few issues coming into the weekend. We got that all solved, made it through the session and got it on pole. The Pirelli tires came up to temp, we got going pretty quickly there and here we are. I have got to thank Phoenix Performance, Hawk Brakes, Penske Racing Shocks and all the guys who have worked hard to get us where we are at here."

Conor Flynn, in the No. 95 Irish Mike's Automotive Porsche 997, was second quick in the session with a time of 2:09.745 and will start alongside Aquilante. Third was last year's pole sitter, and previous qualifying record holder, Randy Kinsland, in the No. 11 Kinsland Racing Chevrolet Corvette, with a time of 2:10.020. The TA3 top five was completed by teammates Tim Kezman, in the No. 4 Fall-Line/Calypso Porsche 911 GT3 Cup, and Mark Boden, in the No. 46 Fall-Line Motorsports/ Calypso Porsche 911 GT3 Cup, with times of 2:10.287 and 2:10.329, respectively.

The TA4 class pole was captured by Brian Kleeman in the No. 07 DWW Motorsports Inc. Ford Mustang, with a time of 2:13.968, well under the existing qualifying record of 2:16.471. The pole stands as Kleeman's second in Trans Am in eight career starts, as he prepares to pursue what would be his first career victory.

“I think everything kind of went to plan," said Kleeman. “We were just looking to lay down one lap good enough to be up front. The car had it; and with fewer cars on track for the session, it was easy to find a gap, lay one down and that was it."

Kleeman was followed in the session by Todd Napieralski, in the No. 39 Chevrolet Performance/ Tremec Chevrolet Camaro, who was second quick in class with a time of 2:16.968. Napieralski has a career victory as Sebring already under his belt, with a class win in 2015. Mike Geldart, in the No. 43 Racers Edge Motorsports/Ford Performance Ford Mustang, secured third position in TA4 with a time of 2:16.700 while Chris Outzen and Mel Shaw completed the class starting order.