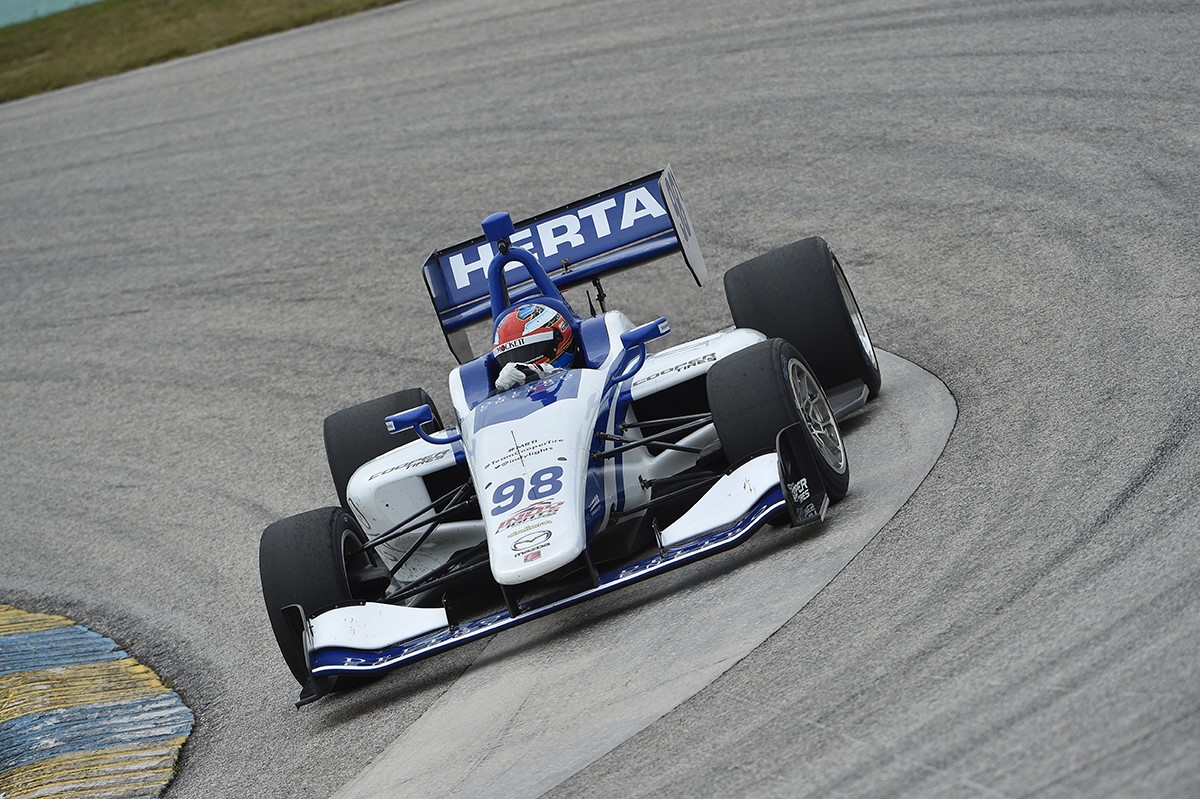 A total of 1271 laps were logged during the course of six and a half hours of testing. Rookie Colton Herta, the youngest driver in the field at just 16, emerged with early bragging rights after posting a fastest lap of 1:15.2009, an average speed of 105.797 mph around the 2.21-mile road course.

After completing one day of testing on the 1.5-mile oval on Monday, the teams spent the past couple of days converting their Dallara-Mazda IL-15s from oval to road course configuration. The drivers, meanwhile, were kept busy with presentations from Mazda and Cooper Tires, plus an overview of the expanding RoadToIndy.TV initiative and interviews with an NBCSN television crew in advance of the new season.

Lap times remained close throughout the day, although Herta, from Valencia, Calif., was out of the blocks quickly. Herta, who began his professional career in the Cooper Tires USF2000 Championship Powered by Mazda in 2014, marked his return to racing in North America following two years in Europe by jumping to the top of the speed charts early for the new Andretti-Steinbrenner Racing combination. Herta’s time of 1:15.6405 remained fastest for much of the morning session before series veteran Kyle Kaiser (Juncos Racing) overcame some braking inconsistencies to edge him with a best of 1:15.5603.

All 15 drivers were separated by just 1.0868 second during the morning session.

Herta, the son of 1993 Indy Lights champion and two-time Indianapolis 500-winning car owner Bryan Herta, again was out of the blocks quickly following the lunch break. He improved his time with less than an hour remaining to what would stand as the fastest of the day, almost 0.3 second clear of a gaggle of cars headed by Andretti Autosport stablemate Nico Jamin, the 2015 USF2000 champion, who turned a best lap of 1:15.5004.

Colton Herta (No. 98 Andretti-Steinbrenner Racing): “It’s the best way to finish, especially with St. Pete right around the corner. It’s important that we’re on top here. We came, and we bossed it, really – the whole team has been super quick. Nico has been right there with me, one-two both days. And we were the quickest no-tow time on the oval last Monday. But today was even more important because this was on the road course, and with St. Pete next week, we set ourselves up well."

Nico Jamin (No. 27 Andretti Autosport): “Everything is coming together very well. We ran into two small issues today but overall we learned a lot and we’re P2 in the final test, so that is a very strong start to the season. My teammate is in front of me so that shows the cars are working very well and now we need to keep working hard and come on even stronger at St. Pete. I feel very comfortable with the car, my engineer and the team, so the transition from Pro Mazda is done. Now it’s time to win races!"

Kyle Kaiser (No. 18 Juncos Racing): “We worked on a lot of things today that we’d wanted to practice, like the push-to-pass and the different engine mapping. We spent most of today experimenting and trying cool stuff, and we had the opportunity to go fast on sticker tires. It was good to get into a rhythm again. There are some good new drivers, which is good for the series, and the times are so close. I like being at the pointy end of the stick, which is where I expect to be for my third year in the series. We’re very happy with the test program and now it’s time for St. Pete."