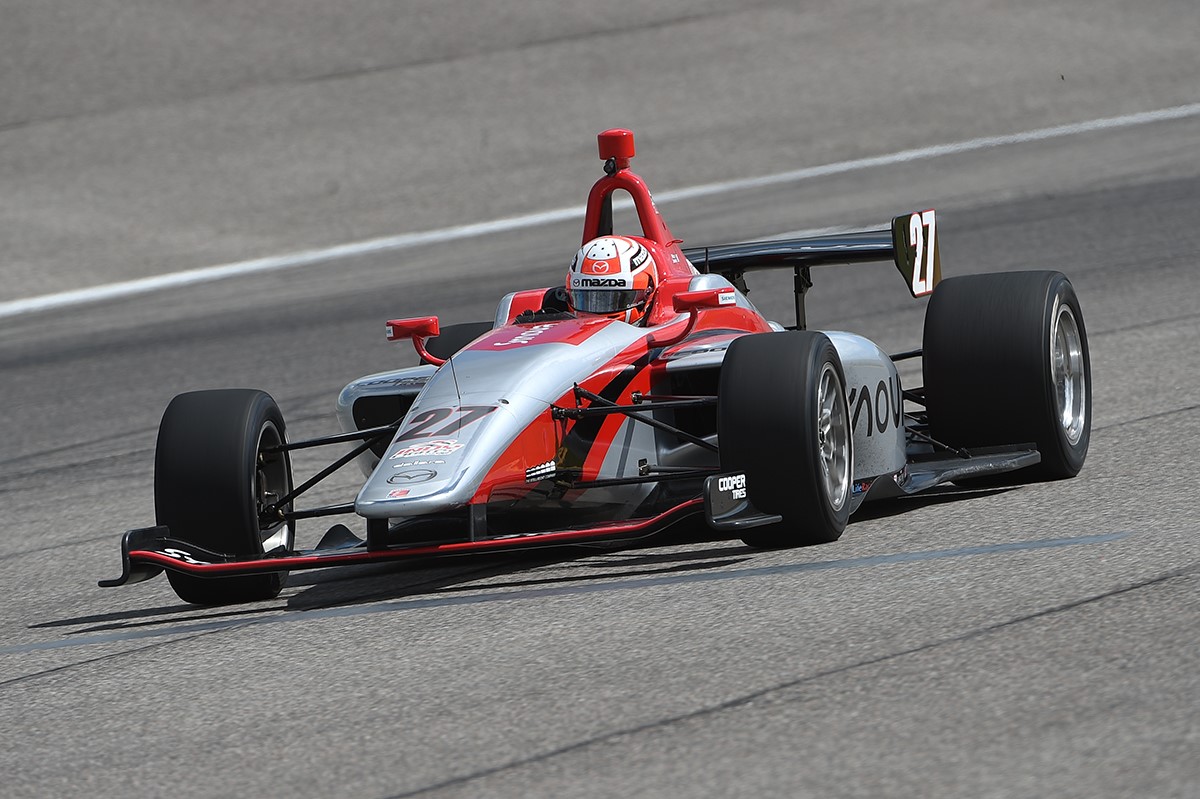 A dozen of the 15 contenders expected to challenge for a Mazda Scholarship valued at $1 million to secure entry into at least three Verizon IndyCar Series races in 2018, including the Indianapolis 500, took the opportunity to test on the 1.485-mile oval. After six and a half hours of running, no fewer than four drivers had posted a time within a mere 0.0468 of a second of the pace set by Nico Jamin. The French rookie, who won the 2015 Cooper Tires USF2000 Championship Powered by Mazda, ultimately ended the day with bragging rights and the fastest time of 28.6991, an average speed of 186.278 mph in his No. 27 Andretti Autosport Dallara-Mazda IL-15.

"It was my first time with the superspeedway wings, and the speed out there is absolutely crazy but I love it," said Jamin. Andretti gave me a great car today. We worked on a lot of different setups and ended up very strong to get the best lap at the end. You can feel the speed building up a lot quicker and you can really feel the aero balance changing in traffic. We did some pack running today with the other team cars which was very interesting. It’s a big jump from Pro Mazda but I am fortunate to have Andretti helping me through it. I feel very comfortable with the car and ready to head to St. Pete."

"This was my first time with the speedway wings and it went quite well. It’s good prep for Indy and it looks as though if we can be quick here, we can be quick there," said Herta. It’s been a pretty easy transition for me from Europe. The car is fantastic and the Cooper Tires work well. It’s a good combo and it seems to produce good racing. There was a bit more cloud cover this afternoon and when the track cooled everything worked better and that’s when we saw the quickest times. It’s a good baseline for St. Pete, which will be a big race for me. It’s where the Yankees do their spring training and where the Steinbrenners live, so I’m counting down the days."

Santi Urrutia and Aaron Telitz, driving for Belardi Auto Racing and winners of the Pro Mazda Championship Presented by Cooper Tires in each of the past two seasons, also were within mere fractions of the ultimate pace with laps at 28.7328 and 28.7459, respectively.

Morning pacesetter Dalton Kellett, from Toronto, Ont., Canada, at the wheel of the No. 28 Andretti Autosport entry, ended the day fifth fastest on 28.8601, narrowly edging out Brazilian rookie Matheus Leist in the fastest of the Carlin cars on 28.8640.