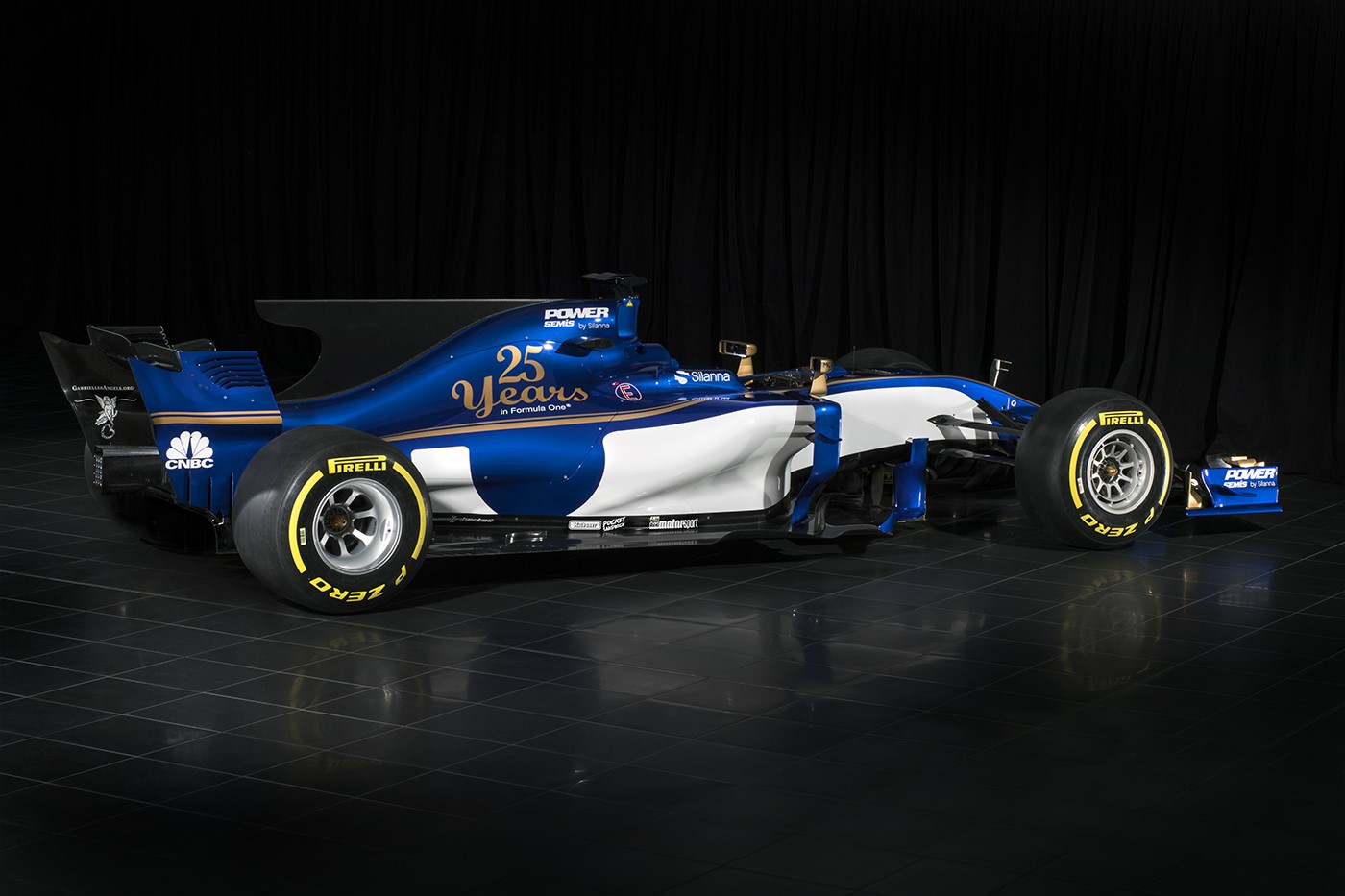 2017 'launch season' set to begin
(GMM) Less than three months after the checkered flag in 2016, F1 is set to burst back into life.

Images of the new Williams have already been revealed, and 'launch season' will begin in earnest on Monday, beginning with Sauber and then continuing right up until the start of winter testing in Barcelona in one week.

"The cars look spectacular from the front and the rear, and with the fat tires it's a bit retro, a bit 80s," he is quoted by the German news agency DPA.

Looks aside, strong advocates for the switch in emphasis from power to aerodynamics, like Red Bull's Dr Helmut Marko, think the change will be good for F1.

"I think we will see spectacular overtaking," he told Auto Motor und Sport.

"But to say that it is exactly what we are wanting is difficult. Judging by the simulations, different scenarios are possible so we'll see.

"In any case, the value of the driver skill will increase," Marko added.

He thinks a lot will depend on Pirelli, the official supplier of F1's new, bigger and grippier tires.

"If the tires are really high quality, it will allow one driver to chase another finally. Previously this was not possible because it immediately begin to wear the front tires, breaking the balance of the car," said Marko.

The British backmarker has now closed its doors, but Hellmund told the Austin American Statesman newspaper that a consortium "agreed terms" with Manor.

"At one point we had agreed terms," said the Texan, who founded Austin's F1 venue Circuit of the Americas prior to its 2012 debut.

Hellmund revealed that most of the individuals in the unsuccessful buyout consortium were North American.

"They all had their different reasons for wanting to invest," he said. "The first go-round, we were even going to involve Anthony Hamilton, Lewis' dad," he revealed, divulging that the rejected buyout amount was "22 million pounds".

"We were looking to form a partnership with one of the big manufacturers, Mercedes or Honda. We had conversations with both," he added. "That way you can get motors – discounted motors – and get a driver."

Hellmund said the deal was on track until Brazil last November, when Sauber leapt ahead of Manor in the crucial and lucrative constructors' world championship.

"They were starting to come to our terms, and then Brazil happened," he said.

Rosberg yet to respond to Bottas message
(GMM) Toto Wolff says he has no problem if Mercedes' F1 drivers are 'attack dogs'.

The comments come as tension threatens to break out even before a wheel has turned in 2017 between Lewis Hamilton and the triple world champion's brand new teammate Valtteri Bottas.

Hamilton is reportedly already firing salvos at Finn Bottas, including a new claim that he would like to prevent Bottas from accessing his telemetry in 2017.

"You cannot want an attack dog in the car and a puppy dog outside of the car," Mercedes team boss Wolff is quoted by the German press.

"It's not always easy to deal with it and I do not always expect smooth sailing," he added.

For his part, Bottas has gone public with his appeal for help from Hamilton's old teammate, Nico Rosberg, with whom Hamilton shared an acrimonious relationship for years.

German Rosberg says that if he does speak with Bottas, he will remain "very neutral" and not give away any of Hamilton's "secrets".

Asked if that meeting has already taken place, Bottas told Bild am Sonntag newspaper: "No, not yet.

"Maybe it would be interesting to talk to him. It could be valuable to know what he has experienced.

"He (Rosberg) knows everyone in the team, so anything that helps me to get performance, I will do it. But of course, he must also want to tell me things."

Bottas also told Finland's Turun Sanomat newspaper: "In January I sent Nico a message that I want to talk to him, but since then I've heard nothing."

He may not get an opportunity to catch up with Rosberg this week, as Mercedes is busily preparing for the reveal of its 2017 car, which will take place at Silverstone.

"It's just for filming but at least we get to drive," said the 27-year-old. "Basically, testing begins and then four days later we're in Barcelona."

As for Hamilton's father Anthony's claim that his new teammate is a "career killer", Bottas responded: "I can only win in this duel — I don't think he will destroy my career.

"I will show what I can do. I tell you what, I would not like to be my teammate either. Because I know exactly what I am capable of.

"We will see how the duel goes, but the fact is that I'm really looking forward to it and I'm counting the days to the tests and the first race."

Marchionne 'not falling in trap' of bold targets

(GMM) Sergio Marchionne has confirmed that Ferrari will keep quiet about bold targets for 2017.

A year ago, the Ferrari president was raising eyebrows with his proclamations about winning the 2016 title, only for the great Maranello marque to fail to win even a single race.

"Intellectual honesty is important but I have to admit that I looked silly," Marchionne was quoted by the Finnish newspaper Iltalehti last week.

Now, he is quoted by the German press: "This year, I am not falling into that trap. Let's see what happens when the lights go out on the track."

And he also told the Italian newspaper Corriere dello Sport: "For Christmas, the guys had only two days off and now they work around the clock.

"The car is looking good, and the engine is running well," Marchionne added.

FXTM partners with Sahara Force India in 2017
Sahara Force India is pleased to welcome FXTM, the online trading platform for the forex industry, as an official partner ahead of the new season. FXTM branding will appear on the rear section of the car’s sidepod as well as on drivers’ and team clothing.

FXTM provides expert knowledge in the fluctuating and fast-moving world of financial markets, ensuring that their clients and business partners invest their time wisely. Since 2011, their state-of-the-art trading tool has established itself as a leader in this competitive market.

Vijay Mallya, Team Principal and Managing Director, Sahara Force India: I am pleased to welcome FXTM as our latest partner just days ahead of the launch of our new car, the VJM10. They see huge value in working with Sahara Force India and recognize the global exposure we will generate for their industry-leading software. The Formula One season will take us to FXTM’s core markets and will allow them to activate and reach a wide customer base. It’s great to have FXTM working with us and I hope we will have lots to celebrate together in 2017.

Olga Rybalkina, CEO of ForexTime Ltd: We are very proud to be partnering with the exceptional Formula One team, Sahara Force India. Their commitment to excellence, drive and innovation made them a natural fit for us. We share common values and attributes in the way we approach our respective businesses. FXTM places a high value on training, education and skills development for their traders, and the Sahara Force India team clearly subscribe to similar principles. We look forward to going on this incredible adventure with them.

Mercedes-AMG Petronas Motorsport is delighted to announce that Toto Wolff and Niki Lauda have signed new contracts which will keep them with the World Champion team until the end of 2020.

This date aligns with the expiration of the current Commercial Agreement with Formula One Management.

Niki Lauda began working with Mercedes in late 2012. Since 2013, he has held the role of Non-Executive Chairman of the board of Mercedes-Benz Grand Prix Ltd and holds a 10% stake in the Team.

Toto Wolff joined Mercedes from Williams in February 2013. As a 30% shareholder in Mercedes-Benz Grand Prix Ltd and an Executive Director, he has worked since that time as the Team’s managing partner, responsible for day-to-day operations alongside his wider responsibilities as Head of Mercedes-Benz Motorsport.

The shareholding arrangements remain unchanged, with Daimler AG retaining a 60% majority stake in the Team.

“It’s great news that Toto and Niki have extended their agreements. In 2013, we restructured the management of the Team with the clear goal of improving our performance. Since then, however, the results have exceeded our expectations. A key factor in this success has been the combination of Toto’s entrepreneurial skills and Niki’s experience. Their renewed commitment gives our program important continuity for the next four years."

“The last few years have been some of the most enjoyable I have had in Formula One. Toto and I formed a perfect partnership at Mercedes and we have a great team on every level that has delivered results. I must thank Dieter and the other members of the board of Daimler AG for renewing their confidence in us."

“Winning is never down to single individuals – it is about the right group of people coming together, aligning themselves with a common objective and then combining their talents to achieve that target. Each day I come to the factory, I am humbled to have the privilege of representing this inspiring group of people."

WILLIAMS MARTINI RACING is pleased to announce Paul Di Resta will remain as its official Reserve Driver for the 2017 FIA Formula One World Championship season.

Paul became Reserve Driver for Williams in 2016, and for the 2017 season he will once again spend extensive time with the team at races to ensure he is fully accustomed to the controls and procedures of the Williams Mercedes FW40, should he be required to step into the cockpit during the season.

Speaking about remaining at the team Paul said: I am delighted to remain at Williams as Reserve Driver for the 2017 season. I’m looking forward to getting to grips with the controls and procedures of the FW40 and understanding the new regulations. I would like to take this opportunity to thank Claire and everyone at Williams for their continued support in being part of the team.

Deputy Team Principal, Claire Williams added: It’s great for us to retain someone with Paul’s experience in the team. His extensive Formula One knowledge will once again be invaluable, especially with new regulations in place for the 2017 season. Paul has been a great asset to the team over the past year and it is great that we will be able to continue working with him again in 2017.