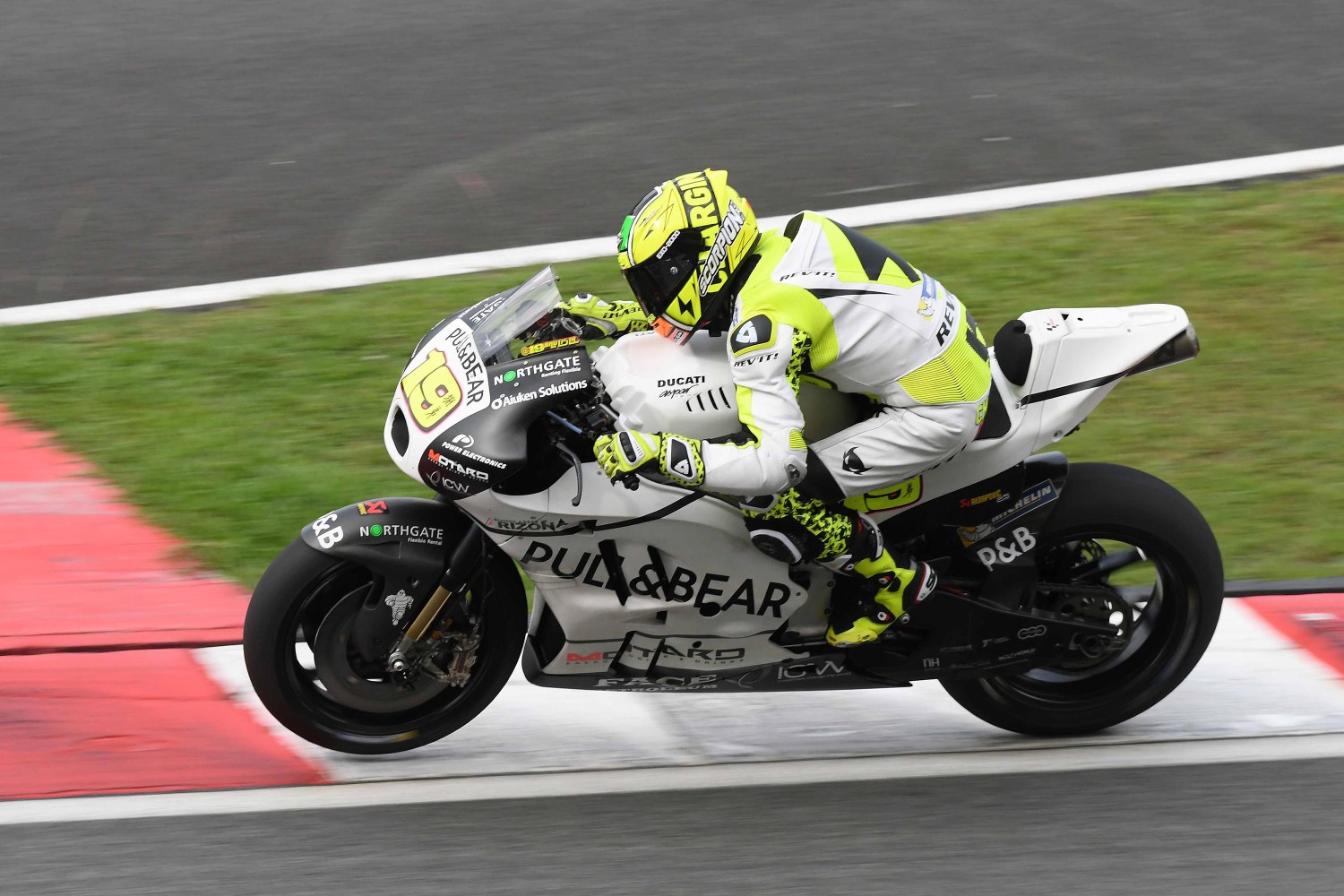 Andrea Iannone (Team Suzuki Ecstar) made the timesheets fantastic reading for his new home Suzuki on Day 2 of the Sepang test, as he smashed Ducati test rider Casey Stoner's Day 1 pace to set the fastest lap of the test so far. A 1:59.452 saw the Italian an incredible four tenths clear of the man in P2, Maverick Vinales (Movistar Yamaha MotoGP). Impressing once again, Alvaro Bautista (Pull&Bear Aspar Team) was third.

Rain and damp conditions were the early headlines of the second day, with no real action until the final few hours of the session as it began to fully dry. Once conditions allowed riders to push, the first crasher of the season was Aleix Espargaro (Aprilia Racing Team Gresini), with Scott Redding and Danilo Petrucci (Octo Pramac Yakhnich), Loris Baz (Reale Esponsorama Racing) and Tito Rabat (Estrella Galicia 0,0 Marc VDS) the other fallers on day two. Rabat's incident at Turn 7 briefly brought out the Red Flag with an hour to go, and the Spaniard was sent to hospital in Putrajaya for further examination following the crash. He suffered a fracture in his hand, wounds to his left knee as well as his right foot and both wrists having taken heavy impacts in the incident. He is set to return to Barcelona for further examination and will not take part in the final days of testing.

Movistar Yamaha MotoGP's new fairing — featuring "internal" winglets — was one of the big debuts of the day as the ban on external winglets comes into force in 2017. With work condensed down into the hours of dry track time, both Yamaha riders Vinales and Italian legend Valentino Rossi made the most of Day 2, with 51 and 54 laps completed respectively. Vinales' best of 1:59.858 kept him P2, with Rossi fourth on a 2:00.254. The young Spaniard was the only other rider to dip below the two minute mark, four tenths off leader Andrea Iannone's time.

Iannone, who also impressed on day one as he settles into life at Suzuki, led for some time until losing the top spot and then going red in every sector to take it back. The Italian has been focusing on a new engine as a point of exploration throughout his 40 completed laps, and rookie teammate Alex Rins increased the good vibes for the Hamamatsu factory as he improved on his Day 1 efforts to go P13.

Johann Zarco was the fastest rookie of Day 2. After a solid first time on track on Monday, the Frenchman took back that honor from Monster Yamaha Tech 3 teammate Jonas Folger. Zarco lined up an incredible P5 — after having also briefly topped the timesheets for the first time in the premier class — and put in a 2:00.343 after 50 laps. Folger continued his impressive run with a 2:00.495 after 43 laps, ending the day P9.

Hector Barbera (Reale Esponsorama Racing) impressed on day two to join Alvaro Bautista in the top echelons of the timesheets on an Independent Team Ducati. Bautista in P3 did a 2:00.218, with Barbera in P6 posting a best of 2:00.352. The two men led the charge on day two for the Borgo Panigale factory, with the Ducati Team riders Andrea Dovizioso and Jorge Lorenzo slotting into P7 and P8.

Dovizioso had a good day one in Malaysia as he was the quickest race rider behind timesheet-topping tester Casey Stoner, and the Italian ramped up the workload on day two to put in an increased 42 laps with a best of 2:00.441 — around half a second down on his Day 1 pace. Teammate Jorge Lorenzo, who ended day one in P17, took a leap up the timesheets as he gets used to life in red and ended second day in eighth — only 0.043 off his new teammate. The ‘Spartan' put in an impressive 66 laps despite the time wasted by the weather, and finished the day a second off Iannone's fastest lap of the session.

Reigning MotoGP World Champion Marc Marquez rounded out the top ten, as the Repsol Honda Team ended Day 2 in P10 and P14 with Marquez and teammate Dani Pedrosa. Marquez also suffered a stoppage on track at Turn 12, but put in a best of 2:00.531 during the course of his 33 laps. Pedrosa was only a few tenths back, with a 2:00.886 his fastest lap after 44 circulations of Sepang.

Red Bull KTM Factory Racing duo Pol Espargaro and Bradley Smith put in 37 and 32 laps respectively, and ended the day in P20 and P25 as they make progress through the incredible amount of testing work for the Austrian manufacturer — including three different chassis – ahead of their full-time race debut at Losail International Circuit in March.

Day three — the final day of testing in Malaysia — gets underway tomorrow at 10am local time (3am CET), before Phillip Island Grand Prix Circuit prepares to next host the MotoGP paddock for the second Official Test of 2017.