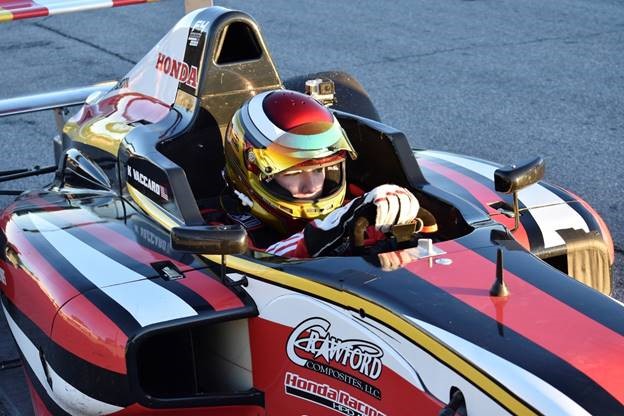 The first entry for the second season of the Formula 4 United States Championship Powered by Honda was secured by 15-year-old, series newcomer Kent Vaccaro of Plattsburgh, New York. As F4 bridges the gap from karts to cars, Vaccaro will get his first open-wheel experience while piloting the No. 16 machine.

"I am looking forward to the challenge that F4 U.S. offers," said Vaccaro. "I may be stepping-up from karts to racing open-wheel cars for the first time, but a lot of my skills from karting will still carry over, like the ability to make quick decisions and the physical and mental endurance it takes to complete a long race. My goals for the season are to increase my speed and for me to earn the respect of the other drivers to confidently go wheel-to-wheel with me."

"We decided to team-up with Momentum Motorsports because of their vast knowledge and expertise in racing," said Vaccaro's father and Adirondack Radiation Motorsports owner Tony Vaccaro. "We were a new-to-open-wheel, father-son team who would've been playing catch-up with the other teams. Now, I still get to spend the weekends with my son working together with Momentum Motorsports. We are excited to embark on this new chapter with the Picards."

"The Vaccaro's share the same values and desire to win as Momentum Motorsports," said Team Manager Phil Picard, Jr. "We are excited to work with team Adirondack Radiation Motorsports. Skylar also brings a wealth of experience and knowledge about the Crawford F4-16 chassis and the best ways to get the most out of it. The goal has always been to keep him with the team in one facet or another. He's been tremendously helpful in bringing Kent up to speed in pre-season testing. When we started talking about keeping him on as Kent's fulltime coach, it was a very easy decision."
Momentum Motorsports is still interviewing and testing with drivers to fill its last two F4 U.S. seats for the season.

Since early registration officially opened less than a month ago, a dozen entries have been submitted by seven F4 U.S. teams with nine of the 12 competitors being series rookies. With car orders surpassing late-season projections, the grid for the second season of the F4 U.S. Championship is expected to expand to nearly 40 cars.

For more information about F4 U.S. or to test with Momentum Motorsports, visit F4USChampionship.com.