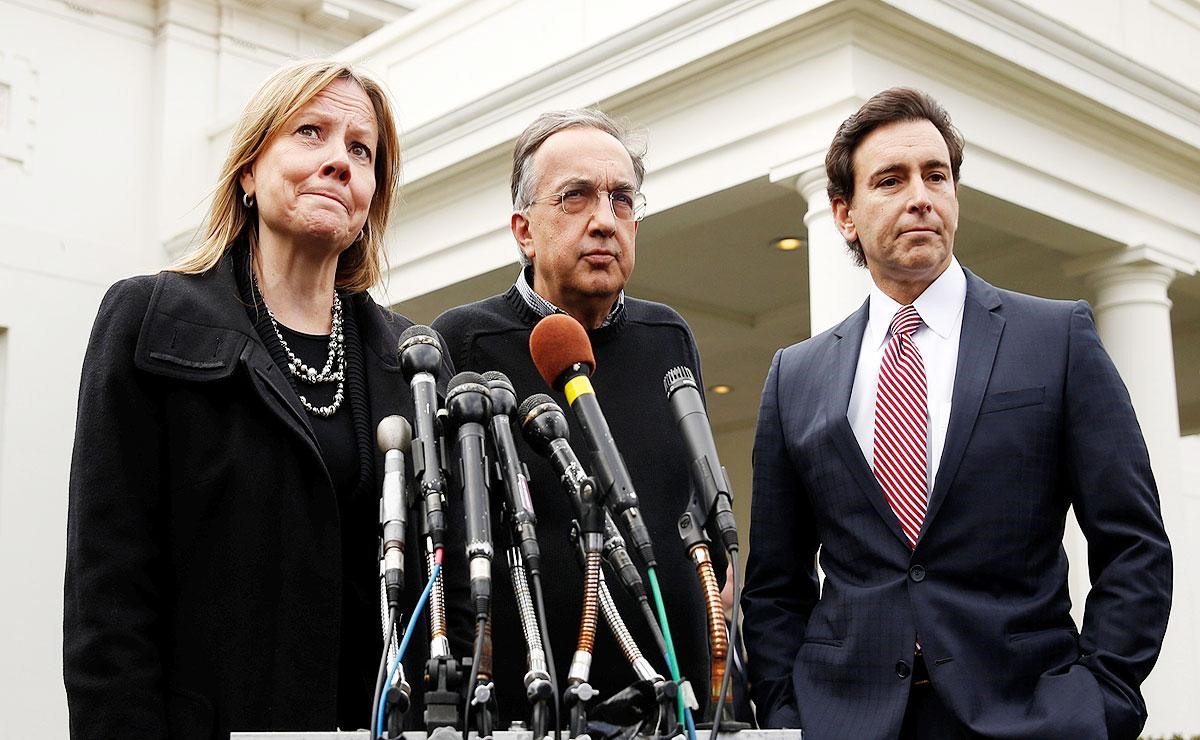 President Donald Trump met Tuesday with the CEOs of the Detroit 3 automakers as he looks to persuade car manufacturers to keep production within the country.

"We have a very big push on to have auto plants and other plants — many other plants," Trump told reporters at the meeting. "It's happening."

Before the meeting, he tweeted: "I want new plants to be built here for cars sold here!"

Afterward, Mary Barra, GM CEO said, "We had a very constructive and wide-ranging discussion about how we can work together on policies that support a strong and competitive economy and auto industry, one that supports the environment and safety. The U.S. is our home market and we are eager to come together to reinvigorate U.S. manufacturing. We all want a vibrant U.S. manufacturing base that is competitive globally and that grows jobs. It's good for our employees, our dealers, our suppliers and our customers."

Trump met Monday with prominent American manufacturers including Fields and Elon Musk, the head of Tesla Motors Inc., and said he would dramatically cut regulations and corporate taxes. But Trump said manufacturers would face tough penalties if they move production outside the country.

Marchionne told reporters after the meeting that Trump did not give them specifics on what regulations he would cut.

After the meeting, Fields said he was confident Trump was "very serious on making sure the United States economy is going to be strong and have policies — on tax, regulatory or trade — to drive that." Bloomberg/Reuters

President Donald Trump will meet with the CEOs of the Detroit Three automakers in the Oval Office Tuesday morning, and it's expected there will be plenty on the agenda.

Trump has put a lot of emphasis on the auto industry since launching his campaign in 2015, notably taking shots at the largest of the two domestic makers for importing cars from Mexico. He has threatened to enact a "big border tax," according to a tweet fired at General Motors earlier this month, scuttled the Trans-Pacific trade pact, and advised both Mexico and Canada of his plan to renegotiate the NAFTA deal.

While industry officials worry about the impact of new trade barriers, they're also hoping to get a sympathetic ear from the new president on a variety of their own concerns, including corporate taxes and government regulations like the tough Corporate Average Fuel Economy, or CAFE, mandate the EPA reaffirmed in the final hours of the Obama administration.

How campaign rhetoric will translate into policy has been a simmering question within automotive circles.

Automakers are particularly concerned about Trump's threat to crack down on cross-border trade, particularly with Mexico, which has become one of the five largest car-producing nations in the world in recent years. Almost all major automakers now operate assembly plants south of the border, and Ford took intense heat from candidate Trump when it announced, last April, plans to move all small car production to Mexico.

Earlier this month, Ford announced it was scrubbing plans to build a $1.6 billion plant in that country, but contrary to statements Trump quickly made, it will still go ahead with plans to move small car production to Mexico. General Motors and FCA have since announced new investments and jobs for the U.S., but those plans were already laid out well before the November 2016 election.

The new president could spell out for the Detroit CEOs just how tough he is going to be on trade, and whether he will follow up with the 35 percent tariff he has suggested he could put in place.

The automakers, on the other hand, are likely to stress the challenges they would face were they forced to produce all vehicles sold in the U.S. within American borders. They could point to a study released this month by the Michigan-based Center for Automotive Research that warned that eliminating NAFTA would actually cost 31,000 American jobs.

Other experts warn that vehicle prices would also surge while consumers would wind up with fewer vehicles to choose from. Paul Eisenstein/NBC News