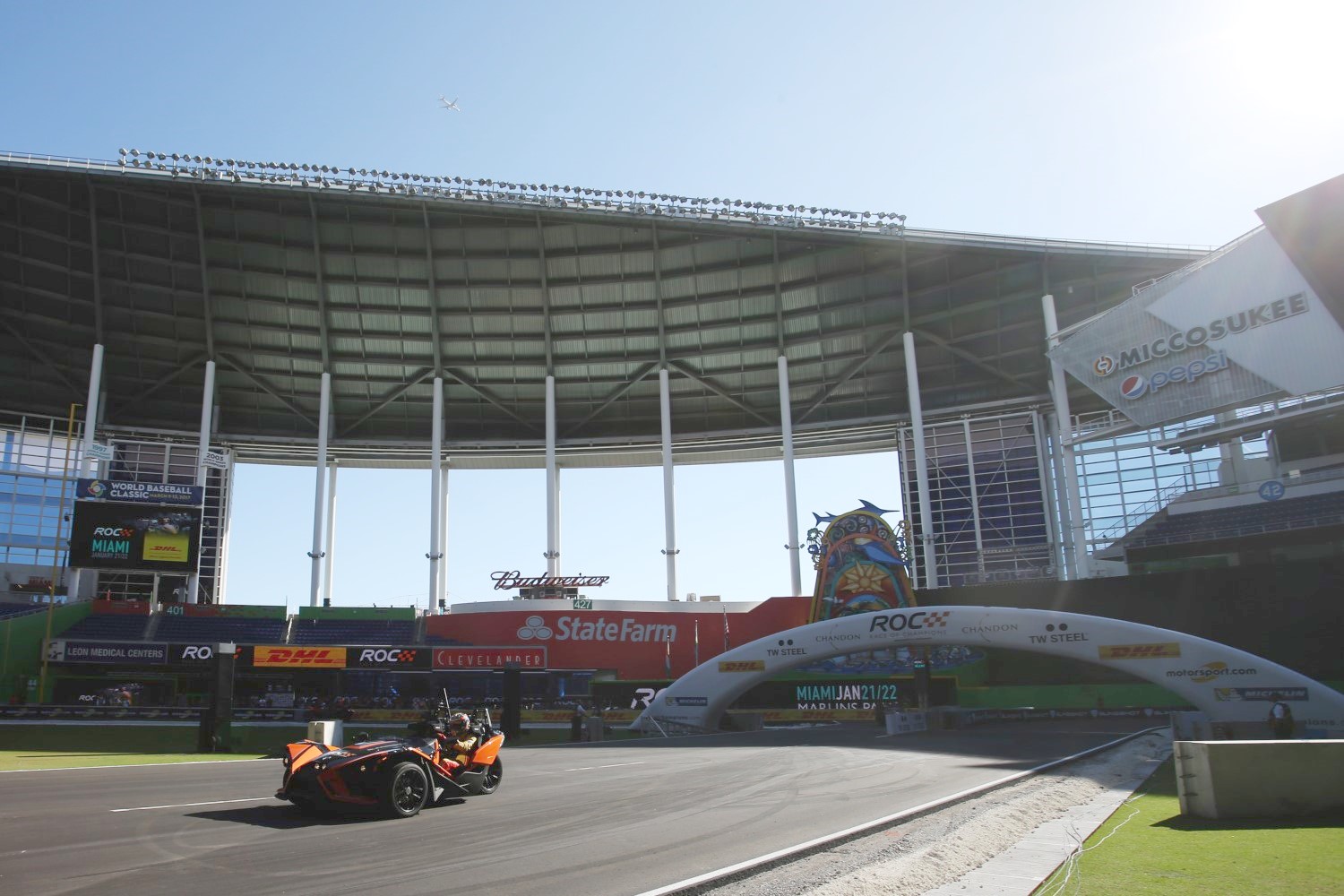 Many of the world's greatest drivers have arrived in South Florida ahead of this weekend's Race Of Champions – and today the diverse field of champions put in their first practice laps of the unique ROC circuit winding its way around the inside of Marlins Park.

The annual Race Of Champions, now in its 28th edition, brings together some of the world's greatest drivers from motorsport's major disciplines – including Formula 1, NASCAR, IndyCar, Le Mans, Rallycross and Touring Cars – and sets them free to battle head-to-head in identical machinery.

The competitive action starts with Saturday's individual Race Of Champions, before the drivers pair up in teams for Sunday's ROC Nations Cup and a special Ryder Cup-style finale: America vs The World.

For the first time, drivers tried out the all-new track, and eight different vehicles, at Miami's iconic Marlins Park.

Here's what the participating Andretti drivers (1/2 of the American team that will take on the world) had to say:

"It's cool to have the Race Of Champions in the United States for the first time here at Marlins Park. I live half an hour up the road so it's a pretty unique situation. I've been here with my kids for baseball games and I've even thrown the first pitch, so it's special to be racing inside this ball park. It's a strange place for a race track but the Race Of Champions has done an amazing job with it. This is a great event and it's great to be a part of this group. I don't feel any more pressure because I'm at home, I felt the same as I did in London, Bangkok and Barbados on my previous visits. You want to win, you're up against the best in the world and it's a chance to race against guys you may never race against again. You race a wide range of different cars so it's a unique situation where everyone is out of their comfort zone and it's fun to see everyone like that. Now I hope we can win it for the USA."

"This is the first time I've been involved in the Race Of Champions, and it's the first time I've really understood the extent of it. The whole event is a lot of fun. I'm very happy to be here and I'm enjoying the experience. To get into the individual race I have to beat Scott, who was pretty exceptional in single-seaters before he went to rallycross. I didn't even know we drove so many different cars at this event until this morning – among them the Radical, the buggy, and the three-wheeled Slingshot – so it's a big learning experience. The only time I've driven something with three wheels before, it started with four wheels… But the NASCAR's cool: that's an American thing so that makes sense!"

Scott SPEED, double Global Rallycross Champion (Team USA Rally X)
"The guys at the Race Of Champions have built such an amazing facility – inside a baseball stadium. The track is awesome. It's such a cool place to have a race and it's great to see all your friends who you have been racing with throughout your life and get everyone together at the start of the year. This is a perfect event for my Team USA Rally X team-mate Travis too. He's actually really good behind the wheel of a car and he throws caution to the wind. So we've got a chance. Meanwhile to get into the individual Race Of Champions tomorrow I have to beat Alexander Rossi. We've never raced before, not even on the X-Box, so that will be exciting and different…"