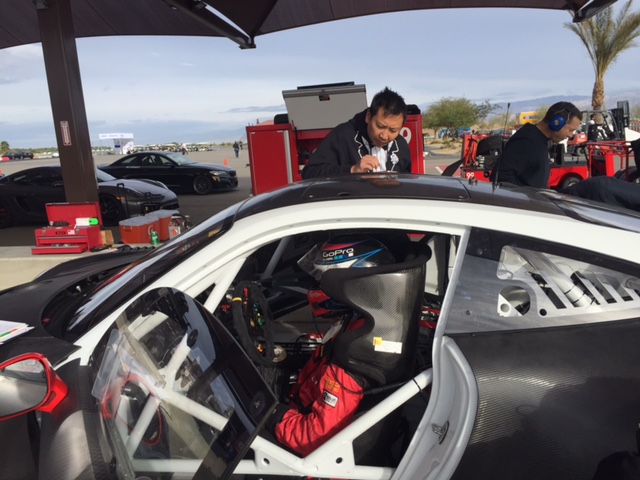 Testing for the 2017 Pirelli World Challenge has been underway for the past few weeks and veteran driver Jon Fogarty was exciting to get back in the driver’s seat for several reasons.

The multi-time racing champion from Bend, Ore., was anxious to get away from the three feet of snow around his neighborhood as he admitted he was tired of shoveling the white stuff for the past month. Fogarty’s physical conditioning was sensational with the outdoor activity.

But his primary reason to hit the testing track was the arrival of the new GAINSCO Insurance “Red Dragon" Porsche 911 GT3 R sports car. It’s the team’s newest racing machine and Fogarty believes the new Porsche will make him a contender for the 2017 PWC GT point championship.

“We were extremely excited to test the new ‘Red Dragon’ and see how the Porsche worked with the Pirelli tires," said Fogarty, a former Grand-Am and Formula Atlantic champion. “We had hoped to run two days at Sonoma Raceway but we were rained out. That was disappointing since we race at Sonoma in the Pirelli World Challenge and we could match up times from last September and with the new test."

But the GAINSCO team was able to record a day of testing at the beautiful new Thermal Club in the Southern California desert. And Jon was excited about the team’s initial findings.

Last year, Fogarty had his ups and downs in his first PWC season in the GT category with the McLaren 650S sports car.

“The learning curve was steep with the team and the car as well as myself with the car and the tires," Jon said. “I think we were qualifying much better towards the end of the season and made some gains with the car. But GAINSCO Racing decided to move to the Porsche 911 GT3 R and I am very happy with the runs at Thermal. It is a fantastic track with a variety of turns. It’s a country club setup for the gentleman racer but we could learn a lot of different things about the new car."

Fogarty has more familiarity with Porsche products, having driven similar cars in several sports car events including the Rolex 24 and Petite LeMans.

“I know the Porsche better and the new car felt good," he said. “I thought the feel of the wheel, seat and pedals were very good and we worked through quite a good number of setups in just one day. I think my being familiar with the Porsche gives our team a much better start to the 2017 year than last year when we were all learning about the McLaren."

Fogarty expressed a little frustration in 2016 as he battled the likes of GT class champions Alvaro Parente, Patrick Long and Johnny O’Connell in a highly-competitive GT racing category. But the personable California native is excited to be back in the cockpit with a familiar mount.

“There was no doubt that guys like Parente, Long and O’Connell were very familiar with their cars," admitted Fogarty. “Alvaro, Patrick and Johnny have been factory drivers with their machines for quite some time. And not to make excuses, we were like rookies coming into the GT division. It was our first time in the class and with the new car. So, it was hard. We have a very good team that has won sports car championships before. It was frustrating for everyone here."

But Fogarty’s 2017 outlook has already vaulted to a new level after his team’s first testing session.

“We will be hitting the testing trail a couple of more times before the season opener at St. Petersburg (March 10-12) and I am anxious for some more runs now in the Porsche," Jon said. “Plus, I am getting a little tired of shoveling snow around the house. We will have two tests in February in the South and the weather should be nice there. I can’t wait to get back in the car now."

With the growing list of GT competitors set for the 2017 Pirelli World Challenge, testing programs will be ramping up through February. And more team announcements are expected as well.

“I believe the GT class will be as competitive as ever and we have to be ready to go when the cars roll off the trailers at St. Pete," said Fogarty. “I expecting our GAINSCO team to be right in the mix with the leaders when the green flag drops in that first sprint race on March 11."

The March 10-12 season opener for the Pirelli World Challenge will feature the GT/GTA/GT Cup divisions as well as the popular GTS category competing in the streets of St. Petersburg, Florida. In addition, the Verizon IndyCar Series also begins its 2017 season at St. Petersburg.