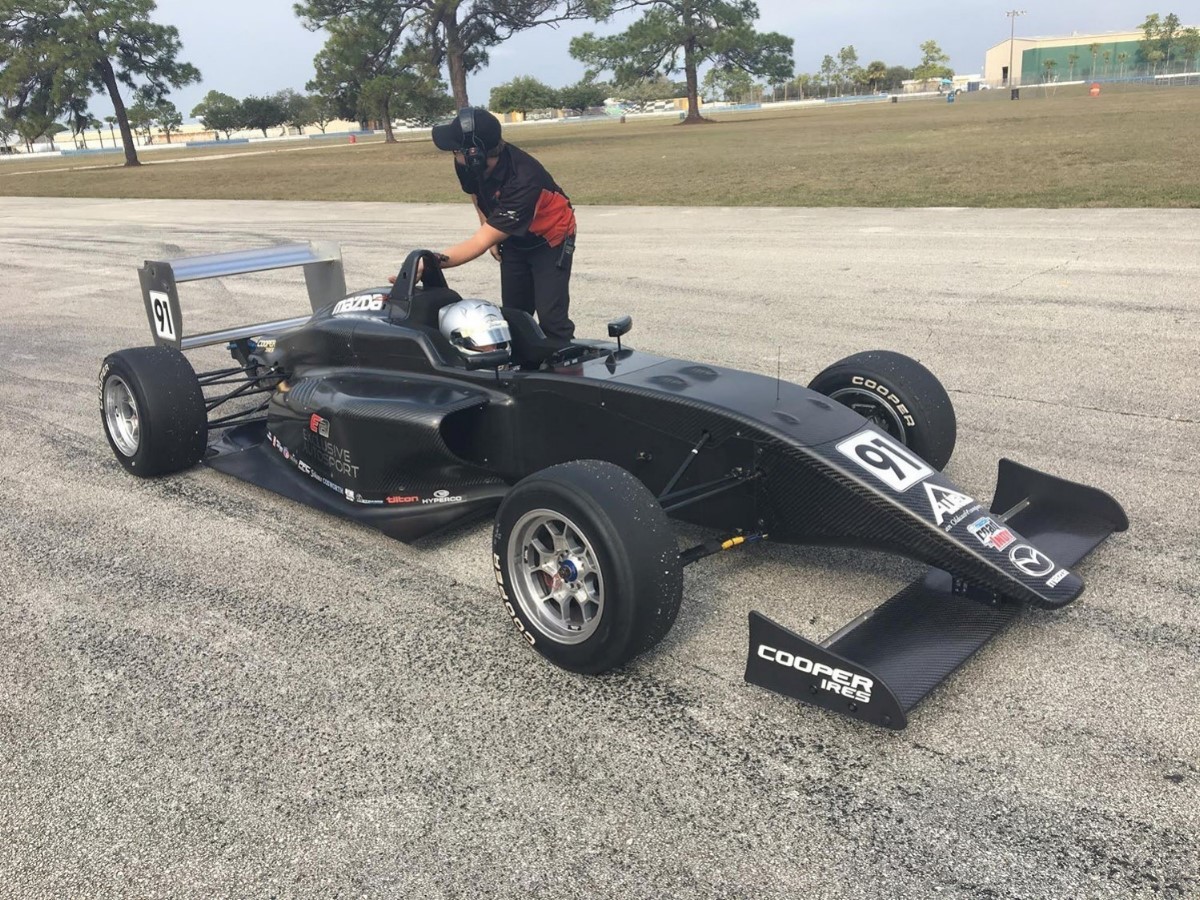 SASKATOON, SK – Exclusive Autosport will make their Cooper Tires USF2000 Championship Powered by Mazda debut in St. Petersburg when the first rung of the Mazda Road to Indy Presented by Cooper Tires gets underway in early-March. Team owners Michael and Kimberly Duncalfe are thrilled to announce their first driver for the 2017 season – fellow Canadian Parker Thompson. The team will head into the season with a true shot at the title with the reigning USF2000 Championship points runner-up primed and ready to pilot the team’s #90 Tatuus USF-17. The young Canadian driver is excited to be returning to the series, having enjoyed a successful test with the squad at Sebring last week.

“I am absolutely thrilled that Exclusive Autosport will make its series debut in the MRTI in the Cooper Tires USF2000 Championship Powered by Mazda," offered Michael Duncalfe, Exclusive Autosport Team Owner. “It couldn't come at a better time for EA as we have completed our fourth season as a team, where we have captured 11 team championships and four Rookie of the Year championships. We felt it was the right time to move up to the next level, especially with the introduction of the USF-17 Tatuus chassis. Dan Andersen and the staff at Andersen Promotions run a top shelf program and it is an honor to have my team competing on this platform.

“It has been a long time coming, signing Parker to a full season program with Exclusive Autosport," Duncalfe continued. “I am especially excited that he will be one of our drivers, a series veteran, leading the EA program in our inaugural season in the USF2000 Championship / MRTI. I have the utmost respect for not only Parker's racecraft, but also his work ethic on and off the track. I have never seen a driver work as hard as he does off the track on his racing program."

The team is making a calculated move into the Mazda Road to Indy Presented by Cooper Tires this season. With multiple championships on their resume in Canadian and American Formula 1600 racing, including SCCA, Formula Tour and Ontario F1600 competition, winning is expected and is the ultimate target. Exclusive’s USF2000 program will base its operation in Palmetto, Florida and will be managed by 2015 USF2000 Mechanic of the Year Jay Green. In addition to Jay, EA will have their loyal full-time mechanics on the program. The current plan is to run three cars in 2017. After having purchased two cars in the initial buy-in opportunity, Duncalfe has already added a third car to the stable.

“Parker and I both have high expectations for the season," Duncalfe added. “He just came off his second season in the USF2000 Championship, where had it not been for some unfortunate luck, he very well could have walked away with the 2016 title. I feel that EA can give him a car capable of winning races and battling for the championship on track, but also, Exclusive Management Inc. can give him the support he needs off the track to assist with the growth of his partnership portfolio. We are thrilled to welcome Parker to the EA family and getting to work on his program."

The 2017 season will not be the first time that Thompson has piloted an Exclusive Autosport entry. The 18-year-old from Red Deer, Alberta raced for the team in their Spectrum FF in the Formula Tour F1600 series in 2015, sweeping a weekend at Circuit ICAR in Mirabel, Quebec. He proceeded to qualify on the pole at the famed Le Circuit Mt. Tremblant the following week. The previous relationship helped make this new partnership a natural fit, heading into the new year of competition.

"This was easily one of the hardest off seasons I have had in my motorsport career thus far," Thompson admitted. “I honestly didn't know if I was going to get behind the wheel of a racecar in 2017, so when the opportunity arose to become a part of the EA organization, I was ecstatic.

“This is a dream team fit for myself, in a number of different ways," Thompson continued. “I met Michael when I was just 11-years-old racing in Saskatoon, Saskatchewan at the Western Canadian Karting Championships. It just goes to show you what relationship building can do for your career down the road! Since then, I actually raced for Michael in his decorated FF1600 program, and claimed my first two formula car wins with him. There's not many team owners in the paddock who I have had such a great history and relationship with over the years. I think that is going to make me push even harder to make sure I am doing everything on and off the track possible to pursue a championship for this team in 2017. You could definitely say that I have some unfinished business to take care of on the Mazda Road to Indy in 2017, and I couldn't be prouder to represent EA Autosport while I do it."

The team will be back testing at the end of the month at Homestead-Miami Speedway.

Drivers interested in discussing EA’s remaining seats are asked to contact Michael Duncalfe direct by calling the office at 306-242-8284.