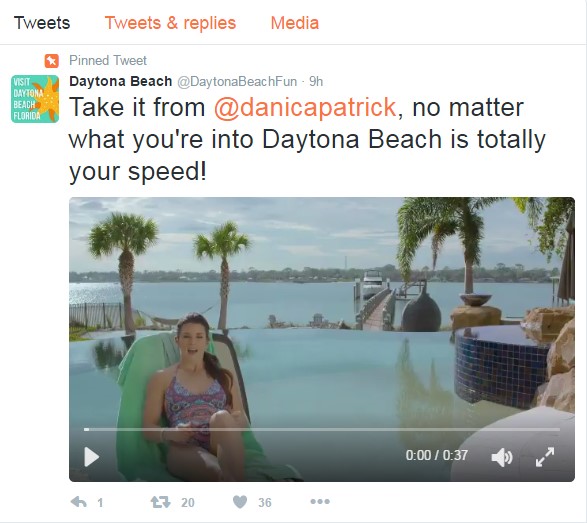 The first of a series of digital ads featuring Danica Patrick is expected to debut today as part of a “highly anticipated online marketing campaign by the Daytona Beach Area Convention & Visitors Bureau," according to Jim Abbott of the Daytona Beach NEWS-JOURNAL.
The first 30-second spot is titled "Soakin'" and shows Patrick “in a waterfront lounge chair to tout ‘23 solid miles’ of cool Atlantic Ocean waters as a big motivation to endure the heat of a NASCAR race."
The script includes the tagline: "Forget what you thought you knew about Daytona Beach, because no matter what you're into, this place is totally your speed."
Patrick “will be paid $100,000 to star in the series of online tourism ads."
The spots were “filmed Dec. 14 at an undisclosed private property in Daytona Beach."
Paradise Advertising & Marketing, Florida, created the campaign, which includes “seven of the main promotional spots, one more than had been planned." Patrick also “participated in a videotaped 3-minute interview about her ties to Daytona Beach that also will be available for the campaign." Patrick is "presented in various scenarios: swinging a golf club in an ad highlighting that sport, grilling seafood in a dining-related spot, even practicing yoga." Daytona Beach NEWS-JOURNAL