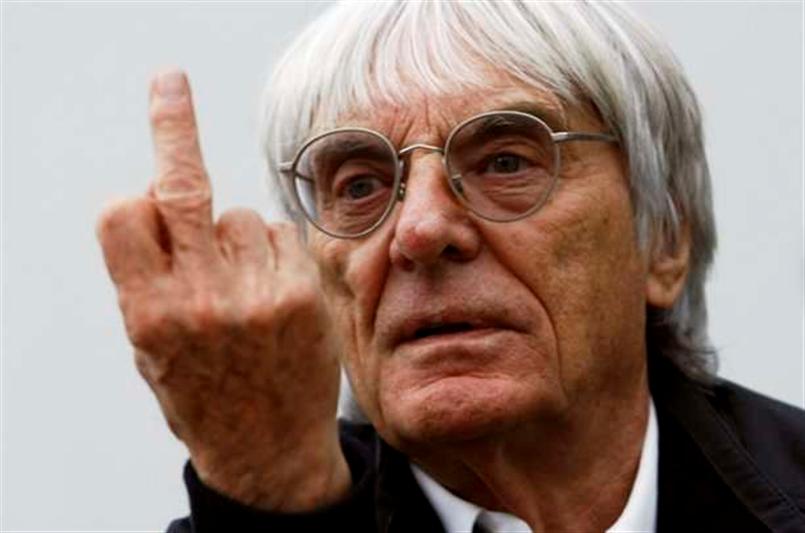 Circuit owner the BRDC has warned it could shortly trigger an exit clause in its 2026 contract for financial reasons, casting into doubt the future of the historic British grand prix.

Figures including Sir Jackie Stewart and 1996 world champion Damon Hill have said the biggest issue is the lack of government support.

"This is a much-loved national event but it has always been very difficult to get additional funding from government," said Hill.

But F1 chief executive Ecclestone told the Daily Mail: "I don't see why they can't make it work.

"They get bigger crowds than anywhere else in Europe, and nobody else is complaining."

Rossi 'logical choice' for Mercedes – Zanardi
(GMM) Mercedes should have been braver and signed MotoGP legend Valentino Rossi for 2017.

That is the view of former F1 driver Alex Zanardi, amid news the German team will almost certainly sign up Williams' Valtteri Bottas instead.

"For me, Valentino was the most logical choice," Zanardi, a former Williams driver, told Italy's La Gazzetta dello Sport.

Mercedes has had to engineer a complex deal to get Bottas out of his 2017 Williams contract, involving Felipe Massa calling off his retirement and perhaps even fast-forwarding Paddy Lowe's move to Williams.

"I think it would have been perfect," he said. "His arrival in formula one would have boosted the audience a lot.

"Can you imagine the media impact that a single victory by Valentino at the wheel of a Mercedes would have had?" Zanardi, now a 50-year-old Paralympic hand-cycling champion, added.

But with Bottas set to be confirmed instead, Zanardi thinks Mercedes will again be strong in 2017 anyway.

He dismissed Ferrari's chances of a big improvement.

"I honestly do not think there will be a great improvement," said Zanardi. "I expect to see (Lewis) Hamilton win."

Ferrari had two day Xmas holiday – Marchionne
(GMM) Ferrari is working harder than ever for F1 success in 2017, according to president Sergio Marchionne.

He was speaking after being hailed on US president-elect Donald Trump's famous Twitter account, with Ferrari parent Fiat Chrysler having announced plans to invest $1 billion in Michigan and Ohio.

But Marchionne is also president of Ferrari, and he said of the F1 team: "The guys are working tirelessly.

"At Christmas they had only two days of vacation," he is quoted by Corriere dello Sport. "The car seems to be going well; the engine is running great on the bench.

"But this is not the time to fall for that, let's see what success we have when we get to the track. For now the work they are doing is enormous, on the engine, aerodynamics and the new rules," Marchionne said.

Marchionne admits he should not have targeted wins and the title last year, and also that aspects of how difficult the sport is surprised him.

"Yes, but do you know what my mistake was? I intervened in the team too late, but I did it out of respect. I had left them to work. If I had intervened earlier, in 2015, probably last year would have gone a different way. But who knows."

He also played down the notion that whether Ferrari can catch up next year depends mainly on Mercedes.

"We would be wrong to think like this," said Marchionne. "It is not their fault for doing great work. Maybe it is not nice, but it is true that they are good.

"No, it depends on us, so we have to focus on what we have to do to beat them."

Marchionne was also asked about the photo on Twitter depicting Nico Rosberg refuelling a Ferrari supercar, and said: "I know of no F1 driver that does not want to drive a Ferrari."

And as for his future as Fiat and Ferrari president, Marchionne joked: "Actually, I'm giving up everything because I want to be a journalist."

2017 training to be 'intensive' – Kvyat
(GMM) Daniil Kvyat says he has returned from a Christmas break to a spate of "intensive training" ahead of the 2017 season.

The young Russian had a tumultuous 2016 season, almost not surviving his demotion to Toro Rosso following the rise of the even younger Max Verstappen.

But Kvyat, 22, bounced back and is now looking ahead to another year with the junior Red Bull team.

"The holidays were relaxing," he told Russian radio Sport FM. "I was in Italy, with family members, with my girlfriend, regaining my strength and now I have returned home."

When asked about his girlfriend, Kvyat said: "Her name is Kelly, which I think everyone has seen on the internet. She is from the Piquet family, as you know."

Indeed, Kelly Piquet – who works on the digital content side of the Formula E series – is the daughter of F1 legend Nelson Piquet, and is former Renault driver Nelson Piquet jr's brother.

As for his forthcoming F1 season, Kvyat said: "I wish to wake up on the first working day refreshed, full of strength and energy, and positive.

"We are already preparing for the new season from a physical point of view. In December, when there was free time, we used it to prepare for intensive training in January and February — I will have a lot of work.

"For several years Toro Rosso has finished the championship in approximately the same position, so our task is to be higher and score more points.

"Of course we all have expectations with regards to the new regulations, but we need to be patient," he added.

Formula 1 is preparing to enter a new era of technical regulations in 2017, with cars set to be four to five seconds per lap faster than 2016 numbers, as a result of revised aerodynamics and wider Pirelli tires.

Force India will launch its new car on February 22, and a team spokesperson confirmed to GPUpdate.net that all crash tests were cleared at the first time of asking, the first outfit to announce that it has done so.

Force India recorded a best-ever classification of fourth in last year's championship standings, with Sergio Perez claiming two podiums, and has set a 'stretch objective' of challenging for third place this time out.

Perez will be joined by Esteban Ocon for 2017, with Nico Hulkenberg moving to Renault.

Data from the tests have been given to all teams ahead of the new season, but Goss expects to "learn a lot" when the new cars hit the track next month.

"Understanding what the tires are actually going to do has been a huge challenge," commented Goss in an interview for the McLaren website.

"The 2017 tires are slightly larger in diameter, but, more significantly, they are wider. Imagine the old 2016 rear tire now going on the front of the car, and a similar-sized increase on the rear tire to accommodate.

"Pirelli ran a very intensive test programme during 2016 to develop the new tires, with the support of three teams. They got lots of mileage under their belts, and all that data has been provided to all the other teams.

"But, from all of that testing, trying to piece together what we think the tires are going to do in terms of performance, degradation, thermal stability etc, that's still quite challenging.

"And there's a couple of reasons for that: even nowadays, it's still quite difficult to understand tire behaviour – even if you go track-testing.

"What we're trying to do is identify which areas of performance are attached to the tire and which to the mule car – that's a major challenge.

"We're pretty close to knowing what we're going to get from the tires, but really understanding how they'll sync with the new regulations will be quite a challenge.

"In pre-season testing, we will learn a lot."

Barcelona will host two pre-season test sessions, from February 27 to March 2 and March 7 to 10, before the campaign gets under way in Australia on March 26.