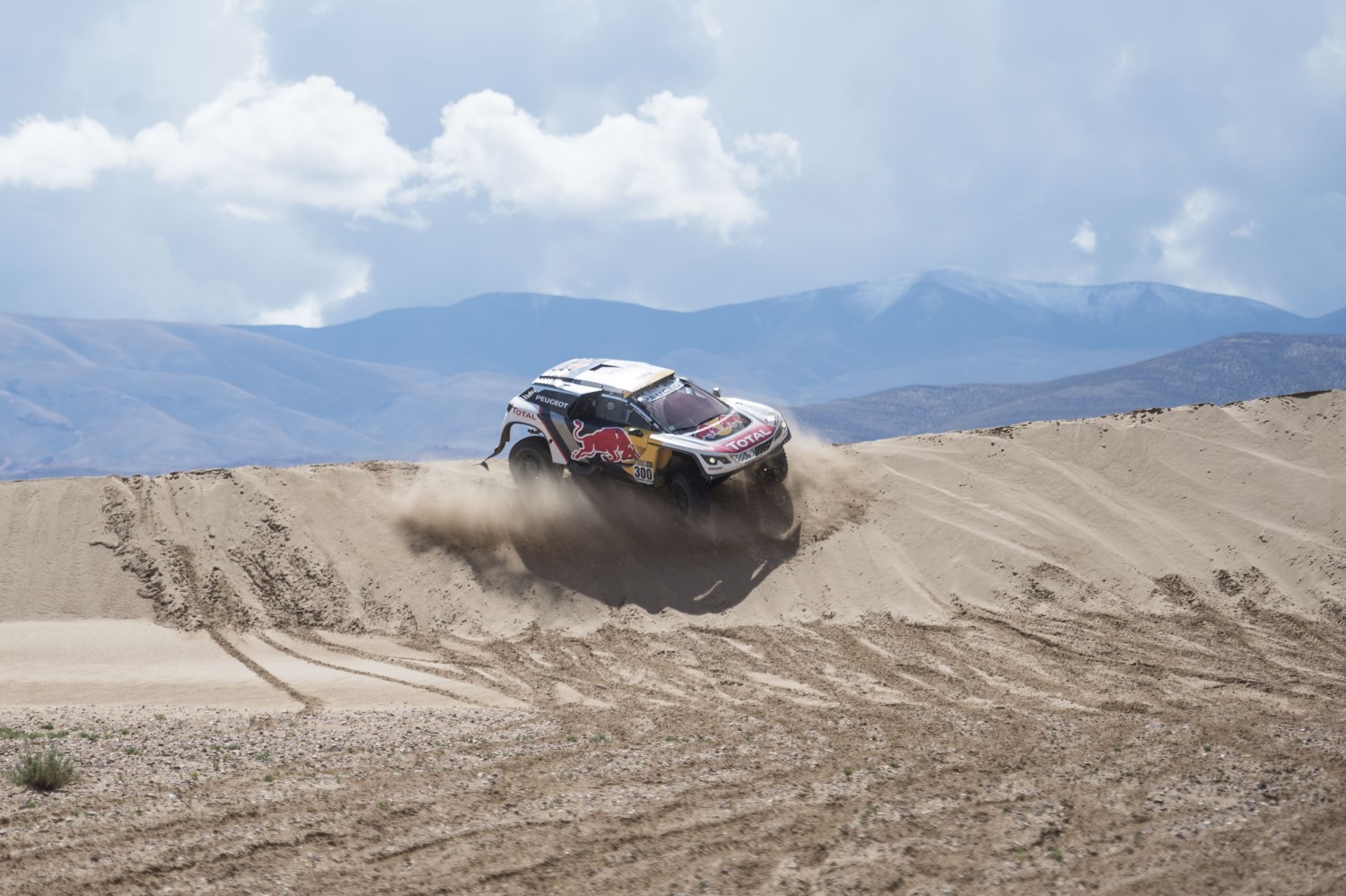 Following the cancellation of Stage 6 of the 2017 Dakar Rally, competitors drove in liaison to Saturday's overnight halt in La Paz, Bolivia. The world's highest capital, 3, 660 meters, gave the caravan an enthusiastic welcome ahead of Sunday's rest day. With the first half of the event completed, Team Peugeot Total is first, second and third in the provisional overall standings.

â€¢ The 2017 Dakar has lived up to the promise of its organizers as one of the most closely fought in recent years. In addition to the event's traditional difficulties, a new type of passage control has been keeping the co-drivers on their toes. Rain and even a little snow have further spiced up the challenge while crews climbed as high as 4, 960 meters in the course of a road section on Day 3. â€¢ Team Peugeot Total has taken the difficulties encountered so far in its stride, claiming four fastest times from five, with only the shortest of the stages contested to date escaping it. The team's three crews still in contention have taken turns at the top of the leaderboard and have all won at least one stage each. This evening's podium is locked out by three PEUGEOT 3008DKRs. Although Loeb/Elena is the only crew to have won two stages, last year's winners Peterhansel/Cottret are currently in front, 1m09s clear of their Franco-Monegasque team-mates. Sainz/Cruz showed their customary speed early on but were eliminated when the team was unable to repair their car after it rolled on Leg 4.

â€¢ The PEUGEOT 3008DKR – which is contesting the Dakar for the first time after succeeding from the PEUGEOT 2008DKR, winner of the 2016 rally – has enjoyed a near-perfect run so far. The crews have benefited from the revised aerodynamics of the SUV- bodied Peugeot 3008 which were notably an asset in terms of top speed on the second leg. Meanwhile, modifications to the suspension and engine have proved valuable, too, with only a minor engine issue slowing Loeb/Elena on Stage 4.

â€¢ The three crews will now be able to take advantage of Sunday's amply-deserved rest day in La Paz, while the rest of the team uses the break to comprehensively refettle the cars ahead of the rally's second and final week. Their work will be particularly important since Week 2's action includes a long marathon stage when no overnight servicing will be allowed.

Bruno Famin
"This year's Dakar has already produced plenty of drama. There have been incidents every day, including the accidents of Nasser Al Attiyah and Carlos Sainz, mechanical problems, some complex navigation and a cancelled stage. The leaderboard underwent big changes in the course of the first week but tonight's top four are still blanketed by less than six minutes. That's practically nothing. Nobody has managed to pull out a big advantage but we've seen some crews lose 45 minutes due to navigation problems, and we're not immune to suffering the same sort of misadventure. It's nice to have our three cars in the lead but we are obviously disappointed to have lost Carlos. Nani Roma is sitting on our tail and even those who have lost ground during the first week still have a chance of getting back into an event like this year's. When you look at what's to come next week, including an 800-kilometer marathon stage, followed by the Super Belen stage, it would be rash to try to predict the winner of the 2017 Dakar Rally."

Stephane Peterhansel (PEUGEOT 3008DKR #300)
Overall: 1st
"We don't have a big lead but it's nice to be in front, even though I can't help feeling that I took a little too much time getting into the swing. We have made a few navigational errors. Thankfully, they didn't cost us too much time and we are first overall this evening despite a relatively poor first week. This year's stages have been more in keeping with the spirit of cross-country rallying than last year. We've had a nice mix and good variety. I am expecting to see more dunes next week, and some more challenging navigation, but that suits us. I hope our car will continue to be just as reliable because we haven't had a single problem so far."

Sebastien Loeb (PEUGEOT 3008DKR #309)
Overall: 2nd
"We're halfway into the rally and I'm pleased with how we've gone so far. It's great to see three Peugeots in front. Daniel and I aren't far behind Stephane [Peterhansel], so there's still everything to play for. Being just a minute down after the time we have lost so far – including our engine problem which cost us 25 minutes, plus a puncture – is very encouraging. There were times when we were convinced we were no longer in contention. The stages have been real cross-country rally tests, including off-road driving and hard navigation. Even the more experienced crews have had problems, so it's good to be still in the fight."

Cyril Despres (PEUGEOT 3008DKR #307)
Overall: 3rd
"David and I have had an incredible first week. We wanted to win a stage, even though we knew it wouldn't be simple on what we expected to be a very complex rally, and the stage we won really wasn't easy. That was a big boost to our morale because it showed we have the speed. It put us ahead of our game plan and was a nice reward for the work we have put in since our switch to four wheels, as well as for the team's ability to provide us with a great car which is fast on all types of terrain. Apart from the bird-inflicted damage to our Sentinel antenna early on, we haven't had a single problem with our 3008DKR and we are really looking forward to the second week!"