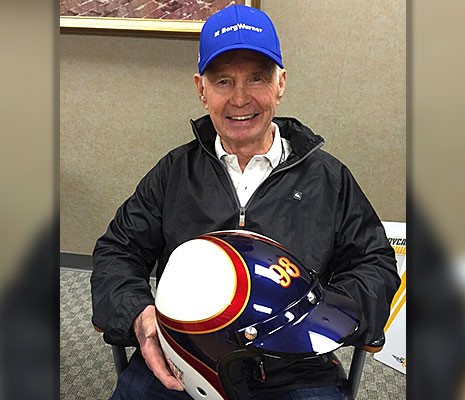 If you've ever wanted to own a unique piece of Indy car memorabilia signed by multiple Indianapolis 500 winners, racing legend Parnelli Jones is offering up a chance.

The sale of helmets, as well as 30 replica helmets signed by Jones to commemorate his Indianapolis 500 victory, celebrate the release of a documentary about Jones and his five decade-long relationship with the Indianapolis Motor Speedway.

“Behind The Indianapolis 500 With Parnelli Jones" explores the rich history and tradition of the iconic Indianapolis 500. Jones, the 1963 winner of the Indy 500, takes the viewers on a never-before seen personal journey as he returns to the Speedway. Also included are interviews with Parnelli, Mario Andretti, Rick Mears, Bobby Unser, Bobby Rahal, PJ Jones, Al Unser, Jr., Chip Ganassi, and Mike Hull.

To promote the film's DVD release, Jones, his son and former Indy car racer PJ Jones and Lee will appear on the CarCast podcast. CarCast, hosted by Adam Carolla and Matt D'Andria, is available on iTunes, the PodcastOne mobile app and the CarCast website: CarCastShow.com.

The film which was screened to a sold-out, standing-room-only crowd at the Sun Valley Film Festival last March, is the first film about the Indy 500 ever chosen by a major film festival. It can be purchased on DVD for $14.99 or instant streaming for $12.99 at Amazon.com.

A portion of the proceeds from the sale of the helmets (which can purchased be for $8,500 for one or $15,000 for a pair (one of each) by contacting info@carbarnproductions.com) benefits the Page Jones Head Injury Foundation.