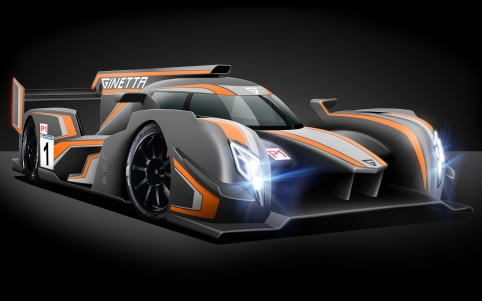 Ginetta has today (4 January 2017) announced they will be a LMP1 chassis manufacturer for the 2018 FIA World Endurance Championship (WEC). The announcement comes on the back of the announcement of Automobile Club de l’Ouest’s (ACO) new 2017 LMP1 rules.

Ginetta has a longstanding relationship with the ACO, having been the founding manufacturer of the hugely successful LMP3 class in 2015. Despite their contemporaneous LMP2 chassis bid being unsuccessful, the Ginetta design team has remained a powerful force in prototypes, moving toward P1 spec having released the powerful G57 in 2016. With both the Ginetta LMP3 and G57 securing their position as some of the most competitive prototypes in the world, Ginetta has seized the chance to add a LMP1 car to their range.

The ACO has fixed the LMP1 rules for five years and offers an open forum for design comparative to the more controlled formula of P2. The Ginetta LMP1 design has therefore started from scratch, allowing Ginetta to partner with world-class designers and supply partners to create an extremely competitive car.

Building on their current in-house expertise, Ginetta has brought legendary car manufacturer Adrian Reynard on-board to lead the aero development, along with a newly recruited Head of Aerodynamics who brings LMP1-H experience and will be named in due course. Paolo Catone, who previously designed the Le Mans winning Peugeot 908, will also be heavily involved in Ginetta LMP1 design.

Lawrence Tomlinson, Ginetta Chairman: “I’m hugely thankful to the ACO for the opportunity to run at the front and challenge for overall podiums. The Ginetta design team’s ability has already been proven by the class dominating Ginetta LMP3 and G57. With Adrian and Paolo on board, the performance of the Ginetta LMP1 is going to be amazing. We are now offering a genuine ladder for our customers all the way from first race to Le Mans which is incredibly exciting for me."

Ginetta has further confirmed they are in advanced talks with engine supplier MECACHROME as well as gearbox manufacturers Xtrac for the drive train. The car will be around 60kg lighter than a P2 and have up to 200BHP more. Accompanied with the huge downforce that their new aerodynamic team will develop, Ginetta is confident this will be a class-leading car.

Pierre Fillon, ACO President: “More great news for endurance racing! Ginetta has proven its expertise in creating successful high performance chassis in G57 and Ginetta LMP3 categories and entering LMP1, the top tier category of endurance racing, appears now to be an obvious move for Ginetta as it moves forward. The valued expertise of Ginetta’s partners for this program is also very promising for the 2018 FIA World Endurance Championship."

Adrian Reynard, Owner ARC: “This certainly appeals to my competitive nature. Aerodynamics, drive-ability and fuel efficiency dominate race car performance in this category. With the highly talented team of experienced engineers that Ginetta has available, this LMP1 contender will be designed and developed to challenge at the highest level. Lawrence has a strong desire to create the very best LMP1 car available for the privateer and he has the commitment to deliver a production run of these"

Paolo Catone: "I'm delighted to be involved in this exciting and challenging project with Ginetta and believe the merging of different experiences, in cooperation with the technical staff in place, will generate a competitive project for the new LMP1 Privateers market."

Ginetta will not be running a factory team but will be looking to build ten chassis to support three, two-car teams run by customers. Significant interest has already been expressed from both new and existing customers, including G57 customers PRT Racing and ARC Bratislava for their 2018 WEC campaigns.

Miro Konopka, ARC Bratislava Team Owner: “After competing for many years in worldwide GT racing, Ginetta gave me the opportunity to move into prototypes with their LMP3. We are incredibly excited about this new chassis which will allow me to expand my motorsport platforms to include the WEC and every team and driver’s ambition, to compete in the 24 Hours of Le Mans."

Initial testing of the Ginetta LMP1 is expected to begin after this year’s Le Mans 24hrs.