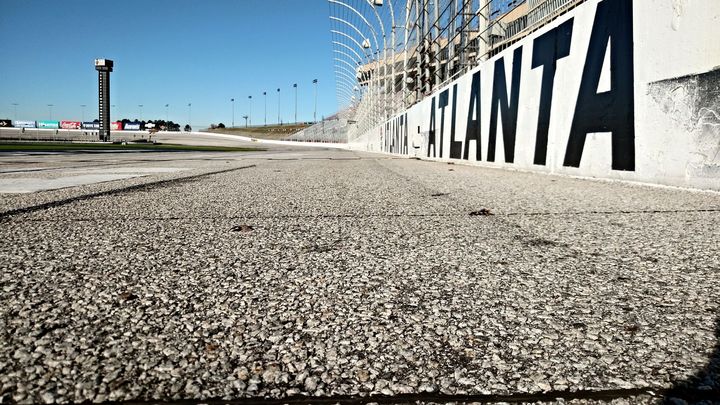 Twenty years after it was last resurfaced, Atlanta Motor Speedway's historic racing surface is scheduled to be repaved this spring, following the March 3-5 NASCAR Weekend triple-header. Work is scheduled to begin in late March with an expected completion in mid-April.

The current asphalt at AMS is the second-oldest racing surface on the entire NASCAR Cup Series circuit, and officials credit its longevity to a combination of the mild Georgia winters and a meticulous maintenance program over its entire two-decade lifetime.

Despite the wear and tear of aging in recent years, the track has been a favorite of many competitors who have raved about the challenging nature of the track. Its aged surface, slick driving conditions and multiple racing grooves have produced not only exciting races and close finishes for fans in attendance, but a technical challenge for drivers who have battled slick corners, fast straightaways and ample opportunity for passing.

Some of the most notable NASCAR races have taken place on the current surface, including Dale Earnhardt's 0.010-second margin of victory over Bobby Labonte in 2000, Kevin Harvick's emotional and record-setting 0.006-second margin of victory over Jeff Gordon in Earnhardt's Richard Childress Racing car the following year, Carl Edwards' first Cup Series victory in 2005 and subsequent season sweep of both Atlanta races that year and the first-ever Atlanta night race in 2009.

Geoff Bodine's amazing AMS qualifying record was set at the very first race on the current surface in 1997, when he blazed around the track in 28.074 seconds at an average speed of 197.478 mph. And currently, Bobby Labonte and seven-time NASCAR champion Jimmie Johnson are tied at five for the most Cup Series victories on the surface. Johnson can break the tie in the final race on the surface at the 2017 Folds of Honor QuikTrip 500 as he attempts his third consecutive victory at Atlanta.

"Many of NASCAR's greatest moments have occurred on this racing surface, and I have no doubt the world's best drivers will give it a proper final event before the new surface comes to life," said AMS president Ed Clark. "Whichever driver can take home the Folds of Honor QuikTrip 500 trophy in 2017 will mark the end of one era of great racing in AMS history and the beginning of another."

The repaving project calls for a brand-new asphalt surface to be lain over top of the current surface. AMS's quad-oval layout and 24-degree banking in the turns will remain unchanged.

While a smoother surface and blended seams will accompany the new repave, the high speeds and multiple racing grooves unique to Atlanta Motor Speedway are expected to endure and produce the same, thrilling racing experience for both fans and drivers for many years to come.

Drivers who have enjoyed the unique quality of the existing AMS racing surface will have one more opportunity to etch their name in the track record books when NASCAR returns March 3-5.

NASCAR Cup Series qualifying will kick off the weekend on Friday, March 3 before the only same-day doubleheader will take to the track on Saturday, March 4 with the back-to-back Rinnai 250 XFINITY Series and Active Pest Control 200 Camping World Truck Series races. The Folds of Honor QuikTrip 500 Monster Energy NASCAR Cup Series race will round out the weekend on Sunday, March 5 with a scheduled 2:30 p.m. green flag.