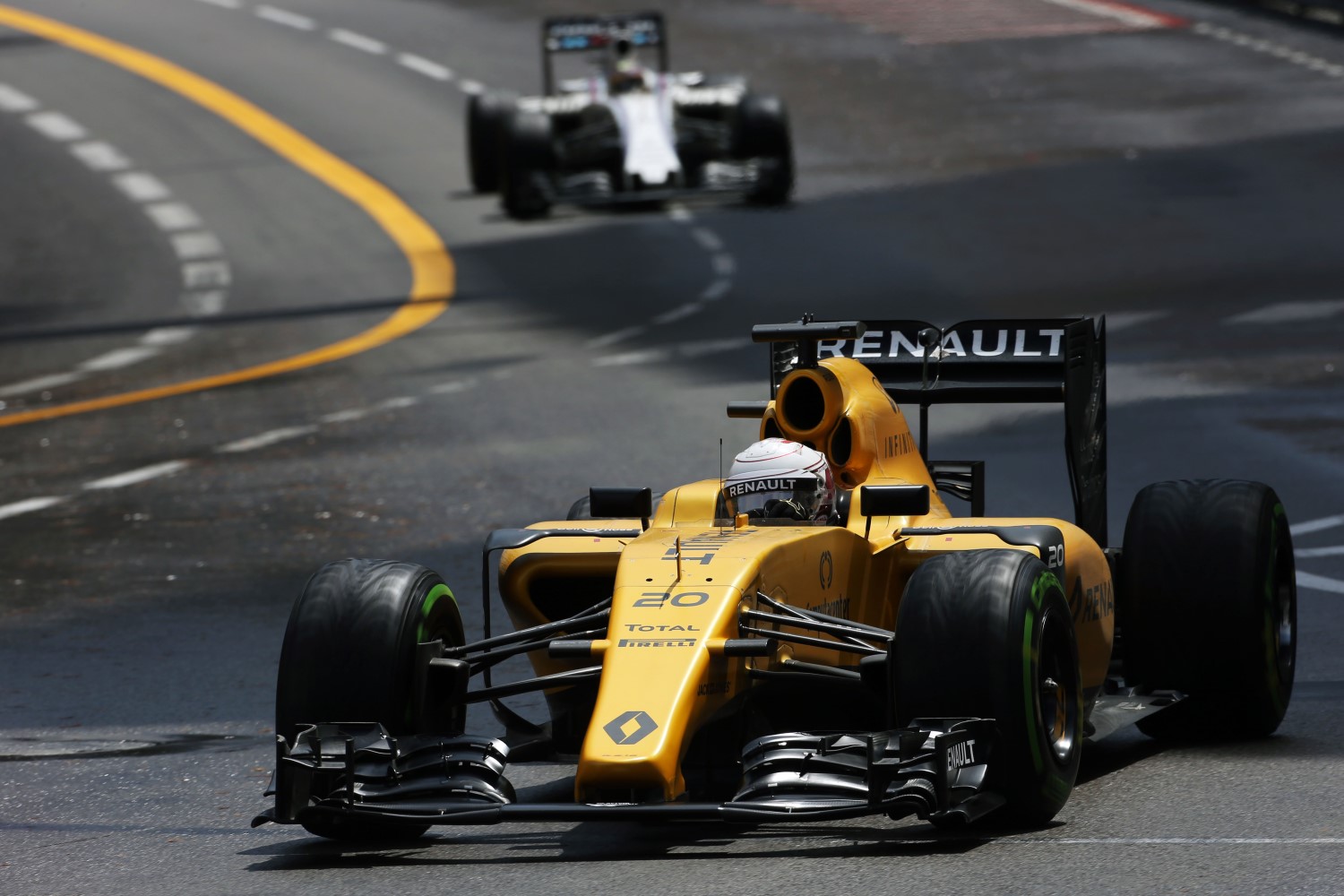 2017 another tough year for Renault – Hulkenberg
(GMM) Nico Hulkenberg thinks 2017 could be a second consecutive tough campaign for the Renault works team.

The German is switching to the carmaker's Enstone based team from Force India, which finished fourth in the 2016 constructors' championship.

Renault, on the other hand, finished just ninth this year, off the back of predecessor Lotus' near-collapse of 2015.

"I think next year is still a build-up year," Hulkenberg is quoted by the Daily Express newspaper.

"I hope that next year it is a little bit better already, but I don't expect them to be inside the top six straight away. Even the top ten is probably going to be challenging," he added.

Even if 2017 is bad, though, 29-year-old Hulkenberg sounds more optimistic about Renault's future.

"These things take time, to build the infrastructure back up, get good people on board and develop the car," he said.

That is the claim of F1 legend Jacky Ickx, a Belgian driver of the 60s and 70s who told Le Soir newspaper that he will be cheering for countryman Vandoorne in 2017.

In fact, 71-year-old Ickx met with Vandoorne, 24, for the Le Soir interview, and said: "Now you have to start the year with one thing in mind — your worst enemy is Alonso!

"I do not say that unkindly, but you must have only one aim — to be faster than him," added Ickx.

Vandoorne, the 2015 GP2 champion, will make his full F1 debut next year with McLaren-Honda.

"As with Max Verstappen in the Netherlands, I hope Stoffel now creates the same enthusiasm in Belgium," Ickx added.

As for the state of the sport more generally, Ickx said he hopes the major rule changes for 2017 go some way to improving formula one.

"F1 and even motor sport in general are struggling to meet public aspirations," he said.

"People come to see a show and heroes, not cars spending an infinite amount of time behind a safety car just because it rains," added Ickx.

Recently, former boss Brawn indicated he left the project after the 2013 campaign due to disagreements with Lauda and Toto Wolff.

"It's a pity that it happened," he added. "But judge for yourself.

"When he left, Mercedes immediately took second place in the constructors' championship, and then won three titles in a row. I have nothing more to add," said Lauda.

"I want to be formula one world champion, like every driver," said the 17-year-old, who is moving into the top European F3 championship for 2017.

"Formula 3 is the next step for me and I can hardly wait," Schumacher told Bild newspaper. "2017 will certainly be a challenge, but the tests in the past few weeks have shown that the car is great fun to drive.

"This is the category that all the big names have come through," said the former Formula 4 driver. "From the point of view of professionalism, it's a bit closer to formula one and a bit more difficult."

However, the young German said he is not setting a deadline for entering F1, saying it will only happen "Once I feel ready for this step.

"I will only know the moment when it comes," said Schumacher. "I will do it in the way that I think is right."

In his earlier karting career, Mick raced under his mother's surname Betsch, but the youngster said he is now happy to be called Schumacher.

"Even if there is a lot of attention on me, I want to race and that's the most important thing."

Rosberg hits back at Hamilton complaints
(GMM) World champion Nico Rosberg has hit back at his former teammate's complaints about losing key members of his race crew in 2016.

Prior to the 2016 season, Mercedes mixed up the two sides of the silver-clad garage, with Lewis Hamilton complaining ever since about the effect it had on his subsequent campaign.

But Rosberg, who beat Hamilton to the 2016 title and then promptly retired, told Frankfurter Allgemeine Zeitung: "I lost my mechanics, too. I also had to give him two of my engineers at the beginning of his time at Mercedes."

The German suggested this is just one titbit of his often thorny relationship with Hamilton that the public doesn't know about.

"That's the full truth," said Rosberg. "I could write a book about the rest. Maybe I will, one day. There are so many crazy and interesting stories."

Nasr admits he could lose F1 seat
(GMM) Felipe Nasr has admitted it is possible he will be left without a F1 seat for 2017.

And if that happens, unless Felipe Massa returns from retirement, the sport will be without a single Brazilian driver.

"I think it would be bad for the sport," Nasr told Brazil's Globo.

"Brazil has so much history in formula one but I don't think it's going to happen. But there's always the risk.

"I want to be on the grid and I'm working towards this."

To date, Nasr has been in F1 with the solid backing of Banco do Brasil, but his sponsor is pulling out of Sauber.

But Nasr said that although the hour is late, the shock retirement of Nico Rosberg has shaken up the market.

"It is very unusual in formula one to be at this time of year and have so many vacant places. I think it's just a matter of continuing to negotiate and trying to find a place," he added.

Massa not commenting on F1 return
(GMM) Felipe Massa is still refusing to comment on widespread speculation his F1 retirement will be very short lived.

Given Nico Rosberg's shock retirement, it is reported that Massa will call off his retirement in order to replace Valtteri Bottas at Williams, with the Finn heading off to Mercedes.

But after playing in a charity football match in his native Sao Paulo, Massa refused to comment on the widespread rumours.

"I'm just going to enjoy my vacation, and that's it," he is quoted by Brazil's UOL Esporte.

Stewart says only 5 drivers earn more than him
(GMM) Sir Jackie Stewart claims he earns more than most of the entire F1 grid.

The legend and triple world champion retired as a driver in 1973, but now he continues to play a role through his involvement with bringing big name sponsors to the sport, including Rolex and Heineken.

"I try to give back to formula one what it gave me — success, fame and money," the Scot told Sonntagsblick newspaper.

So when asked by the veteran F1 correspondent Roger Benoit how many current drivers earn more than him each year, Stewart held up four fingers.

"The two drivers of Mercedes and Ferrari," he answered.

When reminded about McLaren-Honda's Fernando Alonso, however, Stewart added: "Yes, then there are five. But I still only need one hand to count them!"

Stewart said one of the most interesting things about the entire 2016 season was Max Verstappen.

"Other than that, it was not very interesting," he said. "He (Verstappen) reminds me of the first races of Mario Andretti, Jochen Rindt and Francois Cevert. All of them mixed up the business at the time."

So when asked what is missing in today's F1, Stewart answered: "Excitement, incidents, failures and accidents.

"You must not misunderstand that. No one wants to see anyone killed, but it's about the excitement. In my day we had it, but unfortunately many of my rivals paid the ultimate price for that."

Finally, with this week marking the three year anniversary of Michael Schumacher's skiing accident, Stewart said that although he lives close to the F1 legend in Switzerland, he knows nothing.

"I have not heard anything. Unfortunately," he said.

That is the view of Ricciardo's Australian countryman Mark Webber, who thinks his Red Bull successor is among one of the very best in the sport today.

"Daniel was probably the most consistent driver in the field this year and he's absolutely world class, in the top three drivers," he told The Age newspaper.

Many are expecting Red Bull to be strong in 2017, given the team and part-time designer Adrian Newey's tendency to get new regulations right.

"He (Ricciardo) is in a position to go again next year and certainly vie for the championship if Red Bull can get the car together," said Webber, "because Nico is virtually impossible to replace in the short term at Mercedes.

"Nico and Lewis (Hamilton) drove each other to be better, but now they won't have that all-star lineup. Lewis is brilliant and absolutely ruthless, but this will shake up the F1 market," he added.

Zak Brown: Super Bowl an example for F1
Formula 1 could learn from the way in which the NFL promotes the Super Bowl in order to boost fan engagement at each Grand Prix, according to McLaren Executive Director Zak Brown.

Marketing guru Brown was heavily linked to a role with Formula 1's new owners, Liberty Media, before joining McLaren, and reckons more should be done to promote the sport.

"We need to take a look at the weekend format and how we engage with the consumers in the grandstands, and how close can we get them to our team and drivers," said Brown.

"We go to these cities and [it should be] a big event leading up to it.

"I think the Super Bowl does an excellent job, with their level of fan engagement, they come into town a week before and they take over the cities, the hotels and the airports.

"We have got 21 Super Bowls that we put on across the world."

"Digital, which we all talk about, is a quickly, fast-paced and evolving [area of business]… what worked yesterday may or may not work tomorrow," Brown went on to comment.

"I think given that Liberty has a media-centric background and Chase [Carey] comes from the media world, I have got high expectations that they will do great things in the media space.

"This is ultimately how we reach the largest audience we can."

Mercedes have been plunged into this conundrum by the shock retirement of Rosberg at the end of the 2016 season when he won his maiden world championship.

It has been reported that the proposal to promote Wehrlein to the Mercedes drive was vetoed by four time world champion Hamilton.

“You have a young driver programme and you have the highly-rated Wehrlein," Marko said according to Vital F1.

‘But according to our information it won’t be Wehrlein in the car. This means you don’t trust your own junior programme."

“Okay, Wehrlein is very young, but no risk, no fun,"