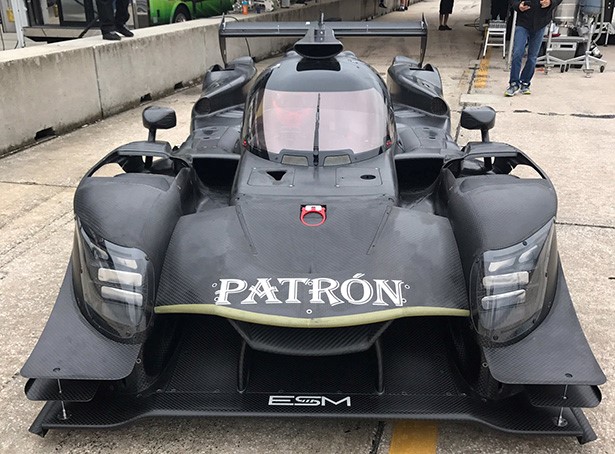 Christmas arrived early for Tequila Patron ESM this week when the team took delivery of their first of two new cars for the 2017 season, the Nissan Onroak DPi. Full season drivers Scott Sharp, Ed Brown, Johannes van Overbeek and Ryan Dalziel ran the car's first laps at Sebring International Raceway for the two day test. Delivered mid-week, the second car did not make the first run, but will be prepared in the coming days for the team's next test.

The new car will take part in the IMSA WeatherTech SportsCar Championship DPi program in the Prototype class. The DPi program will be new to IMSA for the 2017 season, giving manufacturers the ability to create custom engines and body work for the LMP2 cars. A result of a relationship between Tequila Patron ESM, Nissan NISMO, and Onroak, the 3.8 liter V6 Nissan Onroak DPi is the third car in the DPi program to be revealed this off season.

Sharp and Dalziel will race the No. 2 car, joined by Luis "Pipo" Derani for the Tequila Patron North American Endurance Cup races (TPNAEC). Brown and van Overbeek will fill the No. 22 for the full season, with Bruno Senna and Brendon Hartley stepping in for the endurance races.

Official activities for the 2017 begin January 6-8 at the Roar Before the 24, the first test for all IMSA WeatherTech SportsCar Championship competitors. January 26-29, Tequila Patron ESM will take the green flag for the Rolex 24 at Daytona, the longest race on the 2017 schedule. The team won in historic fashion last year, not only earning its first Rolex win, but also becoming the first P2 car, as well as Honda, to win the event overall. For event information, visit imsa.com.

The entire Tequila Patron ESM squad was super excited to finally get our hands on the new Nissan Onroak DPi! We had a very productive two days and we were able to work through many introductory steps. We're a bit behind our competition in terms of testing miles, but excited for the challenge ahead with this dynamic package! Merry Christmas to all!

It was a very good test we started the work we needed to get done. I'm very proud of all the teamwork between Tequila Patron ESM, Ligier, and our new partner Nissan Nismo, to make it all possible. They all did a terrific job to get the car on track! The car showed tremendous promise, and I'm really looking forward to the Roar!

The new Ligier is an evolution of an already good and successful car. The new car, out of the box, is confidence inspiring and easy to drive. There's lots of work left to do, but the Tequila Patron ESM team is up for the challenge. This also marks the first time working with Nissan and NISMO. They are a committed group and we've been impressed with the engine package both in terms of performance and reliability. The 2017 season will have lots of fireworks!

Ryan Dalziel
The new car performed really well and we got a lot of work done. Day one was challenging as always with a new car, but the good people from Nissan NISMO, Onroak, and Patron ESM got most of the items fixed and we logged a lot of miles in day two. It was really important for us to run these days before the holidays so that we knew what parts need addressed for Daytona. The car was really good to drive and the NISMO engine is awesome. I'm really excited for 2017.

May 5-7 Circuit of The Americas