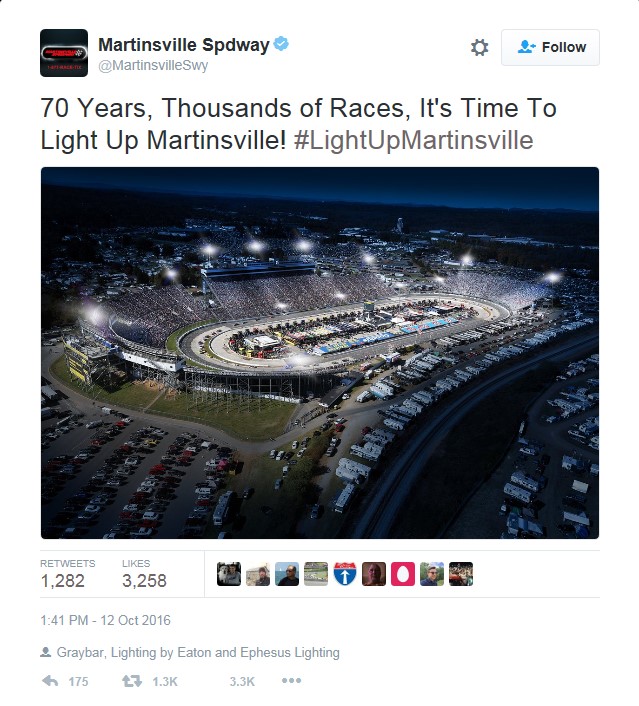 UPDATE Martinsville Speedway's "Light Up Martinsville" project hit a major milestone Tuesday as the first of 19 light poles was put in place. The project will make the track the first major motorsports facility in the United States to have LED lighting. NASCAR's only remaining track from its original 1949 schedule will celebrate its 70th anniversary in 2017 and Track President Clay Campbell said he doesn't know of a more fitting way to celebrate the past than by celebrating the future. "It's a big day for Martinsville," Campbell said.

"Who would have ever thought we would have had lights here? For a long time, that was not really in the cards. We're excited to finally have the lights going up. I think it's going to be an exciting year being our 70th anniversary. Our first night race. It's just an exciting day. You're finally getting to see something and it's exciting for all of us." zzz

While the installation of the lights marks the visual, Campbell said the work started not long after the track announced they would be installing the lights.

"There's been a lot of work going on ever since we made the announcement," Campbell said. "But, you get a visual now of what this place is going to look like with the lights on. We're pretty excited. We're finally getting to the point where you're seeing something happen, not just what's underground."

Campbell said the project is on schedule and should be completed around the end of January. Tickets are on sale now and can be purchased by calling 877.RACE.TIX or online at martinsvillespeedway.com. Martinsville Speedway

12/15/16 It may be the NASCAR offseason, but it's an extraordinarily busy time at Martinsville Speedway.

The 0.526-mile short track shaped like a paper clip, which opened in 1947 and held its first NASCAR race in 1949, unveiled a new logo celebrating its 70th anniversary on Wednesday. But as cool as that was, that wasn't the big news.

The big news is that lights — and, of course, night racing — are coming to the storied track for the first time in its history in 2017. And on Wednesday, the first hole was dug for the first light pole to be installed.

Track officials were on hand to commemorate the big moment on social media.

The artist's rendering of what the track will look like at night after all the lights are installed will look like proves. It's time to light up Martinsville, indeed. Check it out above. Joe Menzer/Fox Sports