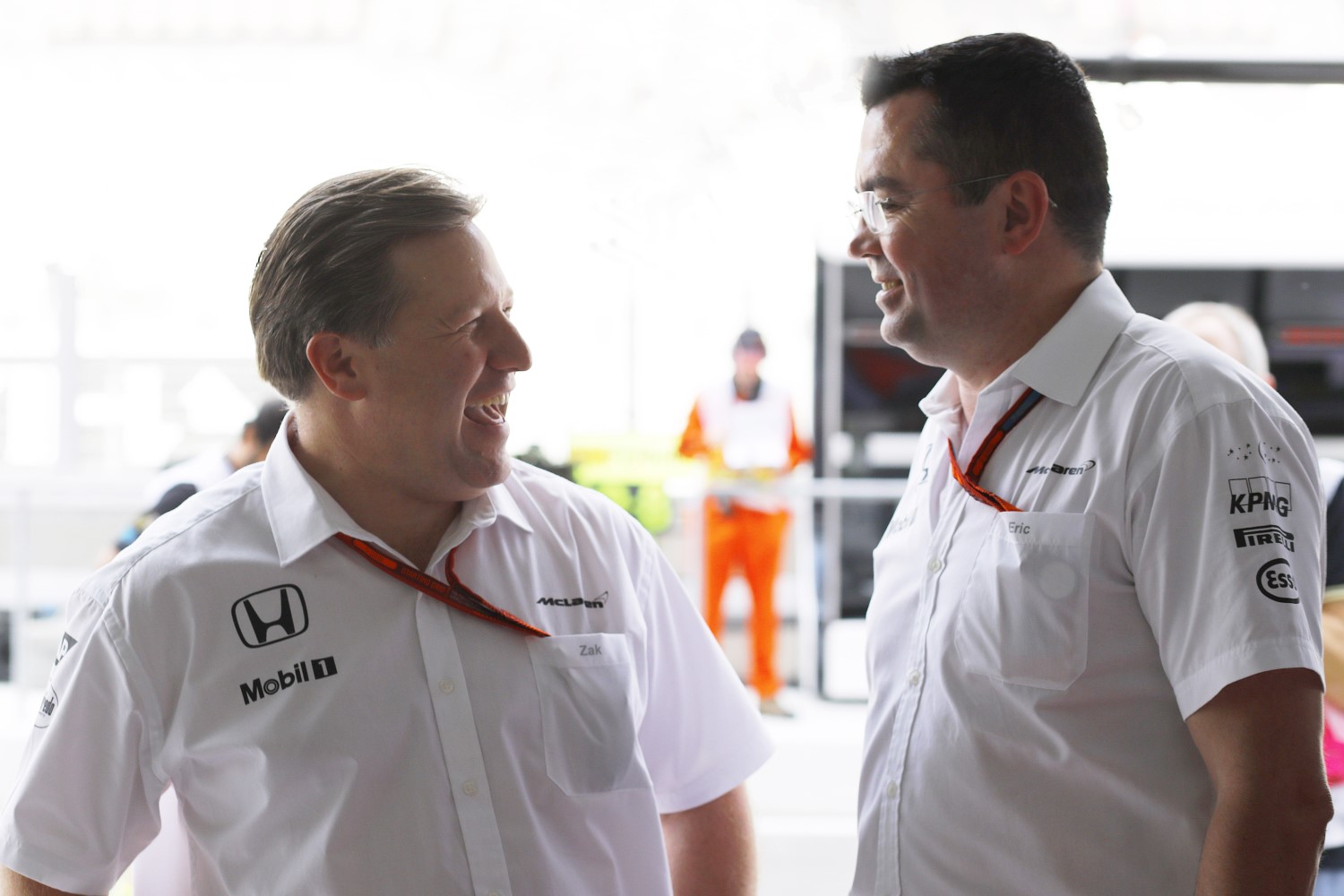 McLaren says marketing chief still at team
(GMM) McLaren has clarified claims that another key member of the Honda-powered team is leaving.

It has been all change at Woking recently, with supremo Ron Dennis leaving and now a man he appointed – Jost Capito – set to follow.

But a McLaren spokesman told GMM that "We aren't commenting" on the Capito rumors.

As for reports marketing chief Ekrem Sami is also leaving, however, the spokesman said: "We can confirm that Ekrem has stepped down from the board of McLaren Technology Group but remains a member of the management team."

It's also a period of change at Williams, with rumors that Valtteri Bottas is off to Mercedes, Felipe Massa is canceling his short retirement, and Paddy Lowe set to arrive as technical boss.

On the Lowe appointment, it has now been made official that existing technical boss Pat Symonds is retiring at the end of the month.

"We now look to the future and will be announcing details regarding the team's technical leadership in due course," said deputy boss Claire Williams.

The British press in particular had identified the Toro Rosso-racing Spaniard as an obvious candidate to replace Nico Rosberg at Mercedes.

"That makes me proud because I know how difficult it is to make a name in F1, particular with the English press," the 22-year-old told Marca sports newspaper.

"Sooner or later my time will come, because after all the ups and downs, like this year not going to Renault as well, we are in a good position. So I go into 2017 with all the desire," added Sainz.

Sainz said he understands why Red Bull was reluctant to release him to Mercedes.

"I also don't think Mercedes, with all its German pride, would steal a driver from Red Bull. Because it would say that their own youth program doesn't work," he said.

On the other hand, Sainz thinks that with Daniel Ricciardo and Max Verstappen locked into the senior team for some time, he has a chance of a move to a big team for 2018.

"I've talked to them and I know that if a good offer comes in 2017 it will be considered. I don't know if they'll let me go or not, but they will consider it — unlike this year when they did not," he said.

Meanwhile, as he returned to his native Australia for Christmas, Ricciardo also ruled himself out of the running for Mercedes.

"I've got two more years at Red Bull. That's where I'm going to be," he told AAP news agency on Wednesday.

"There's a lot of people that are tempted to jump into that seat, and you don't blame them. I just hope whoever gets it appreciates it. It's a damn good one."

Massa plays down EUR 6 million comeback reports
(GMM) Felipe Massa has played down reports that he is definitely canceling his retirement plans in order to stay at Williams for 2017.

Amid Mercedes' mad rush to replace its suddenly-departed world champion Nico Rosberg, it is reported that Williams has now agreed to release Valtteri Bottas, but only on the condition that the experienced Massa comes back.

Mercedes' Niki Lauda, for one, thinks Massa is ripe for a comeback.

"My question is this: didn't Massa cry in Brazil?" he said on Austrian Servus TV.

"His wife and child embraced him, the whole nation was crying, so I ask: why did he cry? When you stop, you laugh! I'll call him and ask him."

It's a big hint that Mercedes has cannily negotiated the Bottas deal, but Massa told Brazil's Globo by phone while holidaying that nothing is decided.

"I have nothing to say," he insisted. "I'm very calm here and don't want to participate in it (the speculation). Everything that has been said so far is not official."

However, the reports about Massa's return are specific, with Italian television Sky saying the new Williams deal is for EUR 6 million.

And Lauda is even answering questions about what will happen when Bottas joins Mercedes, because the fact the Finn is managed by his future team boss Toto Wolff creates a conflict of interest.

"It's easy," said the Mercedes team chairman. "If Bottas comes to us, Toto cannot be his manager anymore."

But Red Bull's Dr Helmut Marko thinks Mercedes should have chosen from its driver development program, "namely Pascal Wehrlein. If you do not take him, it means you don't trust your own program", he said.

Lauda hit back: "I want to clarify. You (Marko) rightly point out that we have a youth program, but its purpose is to give drivers experience.

"Of course, we can discuss the Wehrlein option, but I want to point out that Max Verstappen was initially in Toro Rosso."

Marko, meanwhile, said that he at least sympathizes with Mercedes' situation as it heads into Christmas.

"With Rosberg going, Red Bull Racing has clearly the strongest drivers," he said. "That's why Mercedes does not want to take the risk with a young driver and will use Bottas as a predictable asset."

Sauber tips Liberty to be fairer to small teams
(GMM) Monisha Kaltenborn thinks F1's new owners are sympathetic to the idea of a fairer distribution of power among the teams.

So disillusioned with the way prize money and decision-making power is divvied up at present, Sauber and Force India lodged a complaint to the EU over a year ago.

Sauber chief Monisha Kaltenborn has now told Deutschlandfunk radio that the process is well underway, including a dialogue with the Commission.

"I am confident that the EU is looking very closely at this, because in principle, the answer to the question of whether the competition is distorted or not is relatively simple," she said.

"We will continue to push this forward and we think that something will happen."

A key to that could be the arrival of Liberty Media, as US media tycoon John Malone's group is in the process of buying and taking over the commercial rights.

"Together with Force India, we have already started to discuss it with Liberty," Kaltenborn revealed.

"For the first time, we have an owner who comes from the media sector, and someone who has made very successful investments in other areas.

"In some series, the smaller teams have certain rights which demonstrate the importance of these smaller teams, so I believe that a good dialogue will develop," she added.

Ricciardo rules out switch to Mercedes
Daniel Ricciardo has ruled out taking the "damn good" seat alongside Lewis Hamilton at Mercedes in 2017, insisting that he is committed to Red Bull for the next two years.

Rosberg's shock retirement has left Mercedes searching for a suitable replacement, with Non-Executive Chairman Lauda stating that "90 per cent" of the grid expressed interest.

Ricciardo, however, has made clear that, while he understands rival drivers showing interest in the vacancy, he will be sticking with Red Bull through the 2017 and 2018 campaigns.

"I've got two more years at Red Bull; that's where I'm going to be," Ricciardo was quoted as saying by the Australian Associated Press, on a visit to his home city, Perth.

"There are a lot of people who are tempted to jump into that [Mercedes] seat, and you don't blame them. I just hope that whoever gets it appreciates it – it's a damn good one.

Williams driver Valtteri Bottas is Mercedes' main target, with Felipe Massa reportedly agreeing to return to Formula 1, and partner Lance Stroll, if the move goes through.

Ricciardo will continue alongside Max Verstappen next year.

Marchionne: Ferrari 'humbled' in 2016
Ferrari President Sergio Marchionne says that the marque was "humbled" by its Formula 1 rivals through the 2016 season, as it fell to third in the championship standings.

Ferrari, having taken the only non-Mercedes wins of 2015, approached the campaign looking to fight for world titles, but it failed to win a race, and was overhauled by Red Bull.

Marchionne, speaking in an end-of-year video filmed at Ferrari's headquarters in Maranello, conceded that 2016 was tough to take, and has vowed to learn from the experience.

"2016 has been a difficult year," Marchionne reflected in the video.

"I think we've learned a lot and I think we've been humbled by the success of the other teams, and by the speed with which they've been able to better their cars throughout the season."

Marchionne says he is "very, very hopeful" over Ferrari's chances in 2017, when revised aerodynamics and much wider tires will be introduced, but this time held back on predictions.

"I think [Technical Director] Mattia [Binotto] has worked diligently in putting a team together that can finally break this unfortunate sequencing of non-wins," Marchionne added.

"I'm not going to make any prognostications about how many we'll win, and when we'll win, but I know that we couldn't have tried harder to bring the car to a successful completion.

"Hopefully it'll be a much easier and more successful year in 2017."