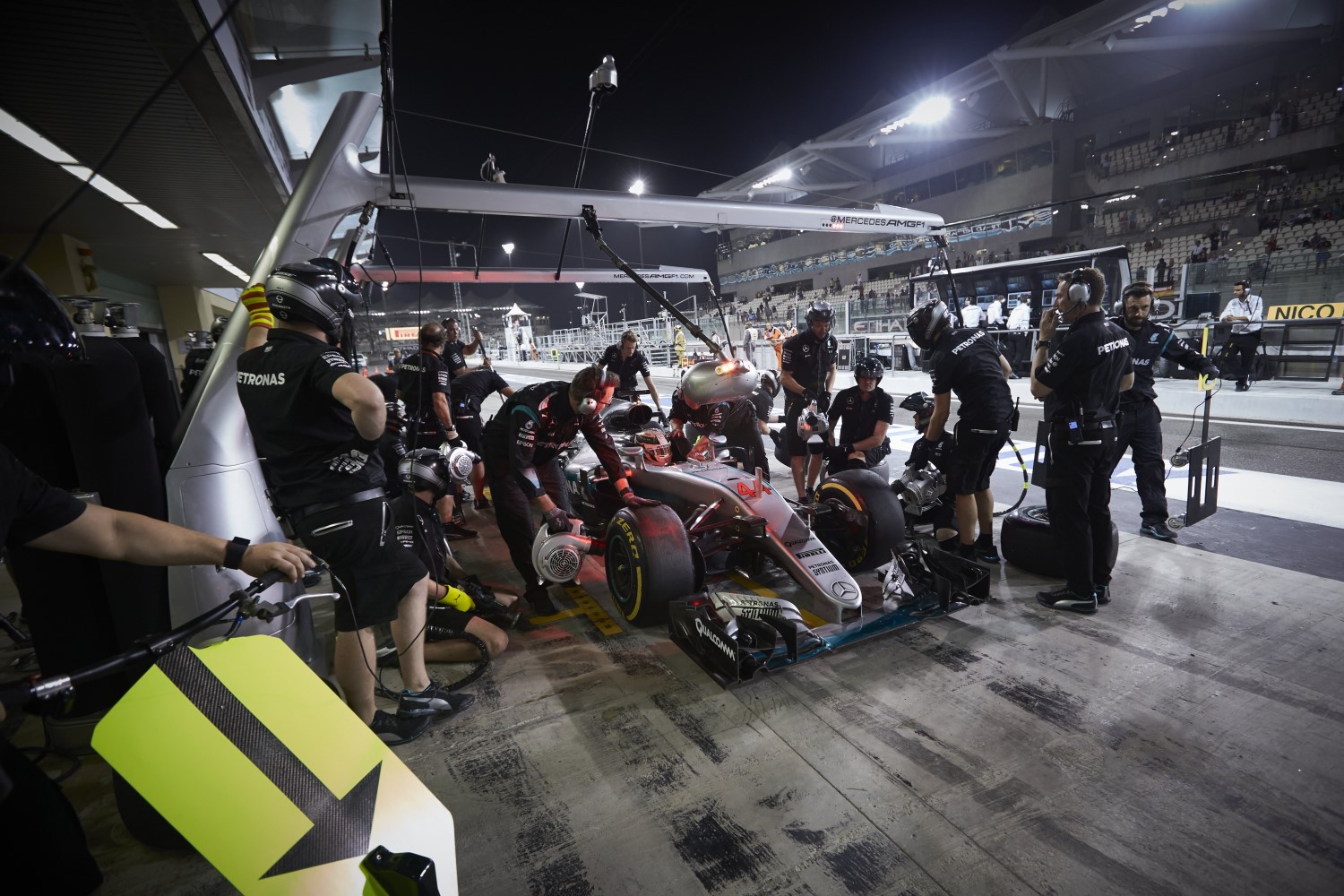 Throughout this year, a bone of contention between Mercedes and the triple world champion was the way boss Toto Wolff shuffled up members of Hamilton and former teammate Nico Rosberg's race crews prior to the season.

"I'll speak to Toto about next year and say 'I don't want my guys being changed'," Hamilton told Britain's Channel 4 television.

"I am now their only world champion so hopefully they respect and appreciate that and the commitment I'll put in next year."

Marchionne not predicting 2017 title
(GMM) Sergio Marchionne says he has learned his lesson and will no longer be making any bold predictions for 2017.

This year, many commentators said Ferrari was in obvious 'crisis' after the new Ferrari president targeted wins and the title but ultimately finished behind both Mercedes and Red Bull.

"Do not expect proclamations," Marchionne said at Ferrari's Christmas media lunch on Monday.

"Last time I was careless but now I only ask for us to do better than 2016, which does not seem difficult."

But he admits Ferrari will need to do well to hang onto its champion drivers Sebastian Vettel and Kimi Raikkonen, who each might have been a candidate to replace Nico Rosberg at Mercedes if not for their contracts.

"I saw Raikkonen at his best ever, but I don't know if he wants to go beyond 2017," said Marchionne.

"I have not talked about extending the contract with Vettel because it's too early; first he must be comfortable with the car next year," he added.

"Vettel and Mercedes? (Niki) Lauda talks to everyone but in 2017, Seb is with us. I have to give stability to the team but we have to give those who drive for us a great car.

"We'll keep an eye on availability of other drivers from 2018," said Marchionne. "With Seb we have to give him a winning car, otherwise it's useless to discuss the future. He wants to win with us, we know that.

"In return he has to drive with confidence, with more calm and less agitation. Thinking of winning on the track, not engaging in personal battles."

Marchionne also said an F1 foray for Alfa Romeo remains on the cards, which "could become an outlet for our young drivers".

But before those juniors can be boosted into F1 with Alfa, "the brand has to make money with the Giulia and Stelvio (road cars)".

One such junior is 2016 GP2 star and Italian Antonio Giovinazzi, who will be Ferrari's official reserve next year.

But another Ferrari recruit will not be Mercedes technical boss Paddy Lowe, although Marchionne admits there were talks.

"We were not trying to get him," he said. "There were proposals, but they were not part of our technical development plans. We have an established team and will not change it.

"If we continue to not win, the fault will be mine," said Marchionne.

Finally, Marchionne was asked about new F1 owner Liberty Media's reported plans for a budget cap, saying that while it is "a noble principle", it is "not typical of F1".

"But I think Liberty understands the business in a different way than Bernie (Ecclestone). With all respect for what he has done, we needed the change.

"With Liberty, more attention will be on the public and things will get better," he said.

Ferrari's 2017 car will be launched on a filming day at Fiorano on 24 February.

Sainz Jr. says no Mercedes move for 2017
(GMM) Carlos Sainz Jr. has ruled himself out of the running to replace Nico Rosberg at Mercedes.

Some pundits, like the British commentator Martin Brundle, have said that notwithstanding his 2017 Toro Rosso deal, the young Spaniard is the ideal choice.

Team owner Red Bull, however, is not letting him go, and Sainz indicated at an event in Madrid that he has set his sights for 2018 instead.

Sainz openly admits that seeing his Toro Rosso teammate Max Verstappen get the call-up to Red Bull this year was bitter, but at the very same Spanish grand prix, he enjoyed his own season highlight.

"It was the best and most complete weekend of the year for me. With the theme that we all know about (Verstappen's promotion), it made me smile inside the helmet, for sure," he said.

And Sainz said he is expecting even better in 2017.

"The engine will no longer be a problem," he said, referring to the move to 2017-spec Renault power. "We will win between 15 to 20kph, Toro Rosso has always made a good chassis so we want to look for fifth in the constructors."

Sainz said he is also looking forward to the new rules and much faster cars.

"It will be like a new category, like climbing from GP2 to formula one, so formula one will become 'formula one-super' and I think that's what the sport needs," he said.

Driver call could take until February – Lauda
(GMM) Mercedes could be set to further delay its decision about the identity of world champion Nico Rosberg's successor.

Initially, the German team said it would give a lucky candidate the ultimate Christmas present, but then a spokesman said there would in fact be no decision until after the New Year's break on January 3.

But team chairman Niki Lauda now says: "It could take until the end of January before we know what path we are going to take.

"We are not ready yet. There are quite complicated negotiations," he added.

It is clear that, failing all else, junior Pascal Wehrlein is ready to step in. But Mercedes' preferred solution is believed to be Valtteri Bottas, the Toto Wolff-managed driver who is under firm contract at Williams.

German publication Auto Bild claims that the deal is basically done, involving Felipe Massa being convinced by Williams to cancel his retirement plans to replace Bottas.

No matter what happens, Lauda admits that Mercedes is on the back foot, with Red Bull now having "the best driver pair" in the form of Daniel Ricciardo and Max Verstappen.

The F1 legend agrees that comparisons between Verstappen and Ayrton Senna ring true.

"Everyone is different, but the potential of Senna, Schumacher and Verstappen are comparable," Lauda told Austrian broadcaster Servus TV.

Ferrari confirms launch date of 2017 car
Ferrari has become the first team to confirm the launch date of its 2017 F1 car, while also bolstering its driver line-up for next season.

The 2017 season will start later than this year, with pre-season testing not getting underway until February 27 ahead of the first race of the season in Australia on March 26. With new regulations being introduced, next year's cars will be vastly different from an aerodynamic point of view while also featuring wider tires in order to increase cornering speeds.

Despite the major changes to next year's cars and longer-than-usual wait before testing gets underway, Ferrari has already set a date for its new challenger to be launched, with the 2017 car set to appear for the first time during a filming day at the Ferrari test track at Fiorano on February 24.

Kvyat used F1's summer break to reset
Daniil Kvyat says he came back from Formula 1's summer break with a fresh approach to racing, after losing his Red Bull seat and struggling to re-adapt at Toro Rosso.

Kvyat started 2016 at Red Bull, but was soundly outpaced by Daniel Ricciardo, and faced criticism for first-lap clashes with Sebastian Vettel at the Russian Grand Prix.

Following the Sochi event, Red Bull chiefs opted to send Kvyat back to Toro Rosso, with Verstappen taking over at the senior team, and winning on his first outing in Spain.

Kvyat, meanwhile, picked up just two points over the next 10 events, while he also dropped out at the Q1 stage on four occasions, and suffered a spate of technical issues.

But after the break, as Toro Rosso drifted back with a 2015-spec engine, Kvyat's form relative to Carlos Sainz Jr. improved, the highlight a ninth-place finish in Singapore.

Asked to reflect on what changed over the break, Kvyat responded: "I had a good time off, and said to myself, 'Just give it your best, what you can, so that you don't regret anything'

"I did my absolute best after the break. Before I was just coming to the track, driving.

"After the summer break I came back with 120 per cent dedication, I was working on every detail again, and trying to squeeze the maximum out of the package that I had.

"We knew a few tracks would suit us, like Singapore; it was a satisfaction to know we probably left everything on track, the team could see that I was working very hard again."

Kvyat overcame the threat of Pierre Gasly, who secured the GP2 title, to continue at Toro Rosso for 2017, and he admits it is a "relief" to know that he will still be on the F1 grid.

"It's a bit of a relief knowing that this is where you're going to start," he said.

"We already know each other well, so we'll just keep up the hard work."

Hulkenberg: F1 podium misses 'just life'
Nico Hulkenberg says his failure to score a podium finish in Formula 1 so far is "just life", as he prepares to embark on a new chapter of his career with Renault next season.

Hulkenberg stepped up to Formula 1 with a strong record in junior formula but has yet to grace the podium across six years in the sport with Williams, Sauber and Force India.

Only Adrian Sutil, with 128 starts, and Pierluigi Martini, with 119 starts, have taken part in more Formula 1 races without a podium than Hulkenberg, who hit 115 in Abu Dhabi.

Hulkenberg, though, insists he is not getting hung up on the statistic.

"There is always a reason for it, if you go to each incident or case," he explained.

"Some could have been avoided, mistakes happen, or there's misfortune, but it is what it is.

"It's a shame, because I would have liked to score a podium for myself and for the team.

"[But] it's not that I think about it [the podium misses] and cry like I'm always the unlucky one. It's just life. Hopefully it returns the other way [as] a favor as well in the next few years.

"I believe in hard work and good decisions, and the rest will come or it doesn't."