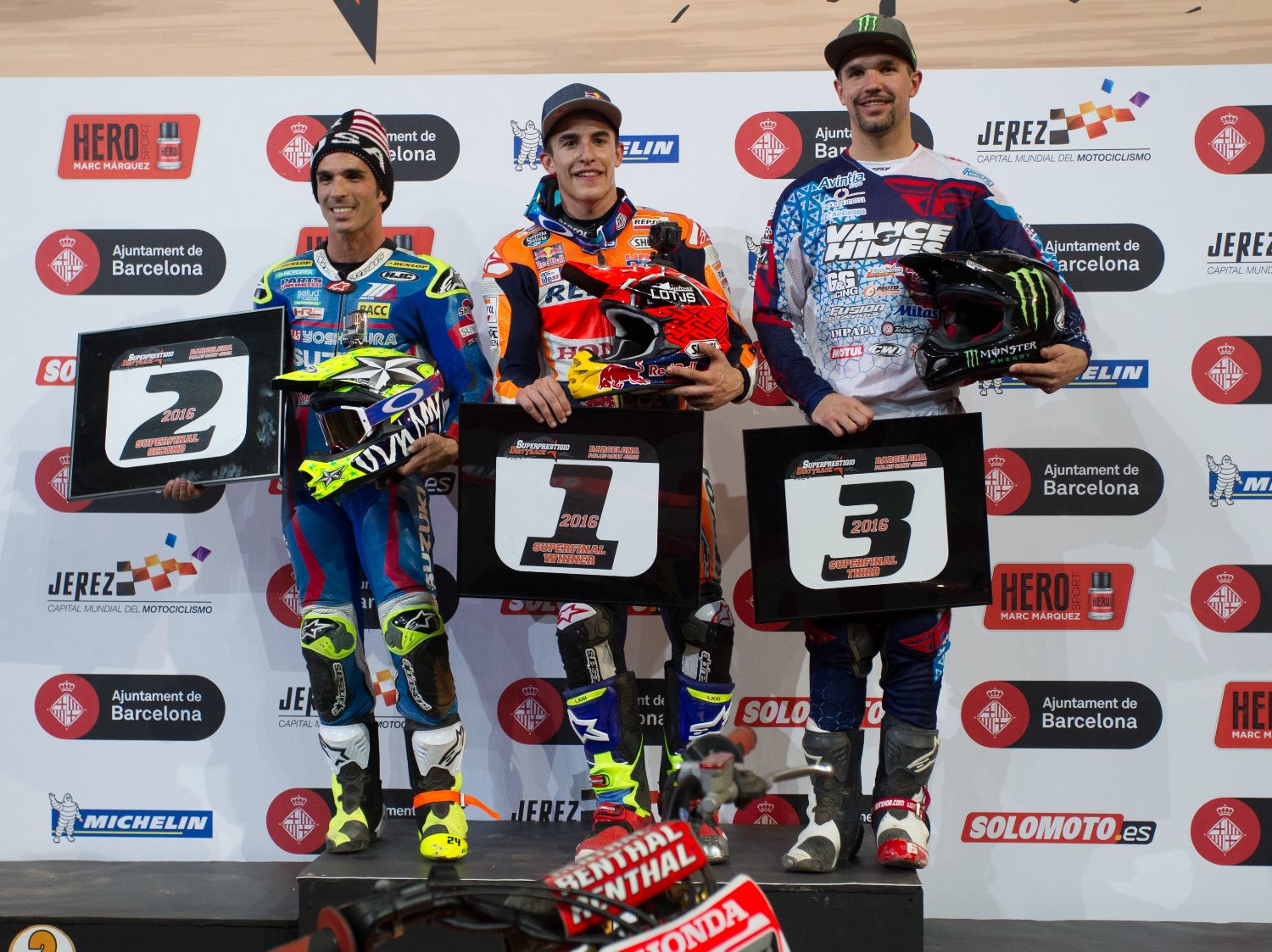 BARCELONA (Dec. 17, 2016) – American Flat Track star Brad Baker has been crowned the king of the Superprestigio in each of his two previous appearances, but this year Marc Marquez toppled the crown. The three-time, defending MotoGP World Champion took top honors in the Superfinal in front of his hometown crowd at Barcelona’s Palau Sant Jordi on Saturday night.

The pair headed into the final showdown of the evening as winners of the brackets for their respective classes – Superprestigio and Open – but they were both after bragging rights for taking home that Superfinal win and Marquez was happy to have that this year.

“Of course I’m really happy because this is the Superprestigio," Marquez said. “Last year I was really close from the victory and this year I get it. I know the mistakes that I did last year, but this year I try to be in a different way and it was working well. But especially the pace was working really good. Toni (Elias) was pushing a lot but the pace this year was the best year, what I feel. Also, one of the reasons was my team. They are right here at the Palau. It was a really good job."

It was a reversal of fortune for Baker, as this time around Marquez made improvements to his setup and rode off into the distance, while Baker had to play it smart to get a spot on the podium.

“Tire choice was very crucial today," Baker said. “The surface was very abrasive and these tires are very soft, so they wear really quick. I really never road with a new tire all day long, but I just thought with the 16 laps that I was going to need a lot of rubber, a lot of tire to last at the end and it was a bad decision."

Two laps in, Baker knew his mistake and knew that his race was over. Toni Elias was able to get past Baker and attempt to chase down his fellow Spaniard, but Marquez was in the zone. The former Moto2 World Champion and current MotoAmerica Superbike racer had to settle for second, but after a rough week struggling to find the right setup, Elias was more than happy with a runner-up result.

“We didn’t expect that. We knew that the Superprestigio (Final) was possible but not the Superfinal," Elias said. Thanks to my team because they work really hard throughout the week, especially the last days. We made the right choices at the right time."

Elias also had a bit of luck, as he realized last minute that his tire was toast before going into the Superfinal. But with the good will of the tire manufacturer, they reopened their truck and fitted a new tire for him.

“I was really close to losing the Superfinal because my rear tire was completely finished and I went to push for it; I need to change my tire," Elias said. “He waited for me and finally everything was right. The Superfinal was perfect. I could pass Brad, someone who rides that well. This is nice to end the year this way, because it’s been a nice year. Thanks to everybody in the U.S. Thanks to this team, to my family, all the fans in the stand. And tonight to continue to party!"

As for Baker, he was obviously disappointed not to keep his Superprestigio streak alive, but he’s enjoyed his time in Spain and is more motivated than ever to come back next year and take back the crown.

“Well, first off, this event, this time that I come over and spend in Spain is something that I’ll remember forever," Baker said. “It’s been something that is very important to me and the people that I’ve met here in Spain and for the Superprestigio – it’s irreplaceable. I’ve enjoyed it and I’ve had a really good time here at the Superprestigio, but it’s like the pressure to win and to produce for Flat Track, it gets more intense every single year, everybody else gets better. But I’m just thankful to be a part of that and that Flat Track is here and the Superprestigio is getting bigger and everyone else is growing with it."

Next Up:
American Flat Track will kick off the 2017 season during Daytona’s Bike Week festivities on Thursday, March 16 with the all-new DAYTONA TT, built inside the trioval at Daytona International Speedway. The DAYTONA TT will mark the dawning of a new era for America’s most historic form of motorcycle racing, and the “World Center of Racing" will serve as the first battleground for the great American war between Harley-Davidson and Indian Motorcycles in 2017. Tickets for the DAYTONA TT are now on sale and can be purchased at www.daytonainternationalspeedway.com.
How to Watch:
FansChoice.tv is the official home for live streaming coverage of American Flat Track events. The site also provides coverage of IMSA's development and single-make series, and NASCAR's touring and weekly series. Catch all the action at http://www.FansChoice.tv.