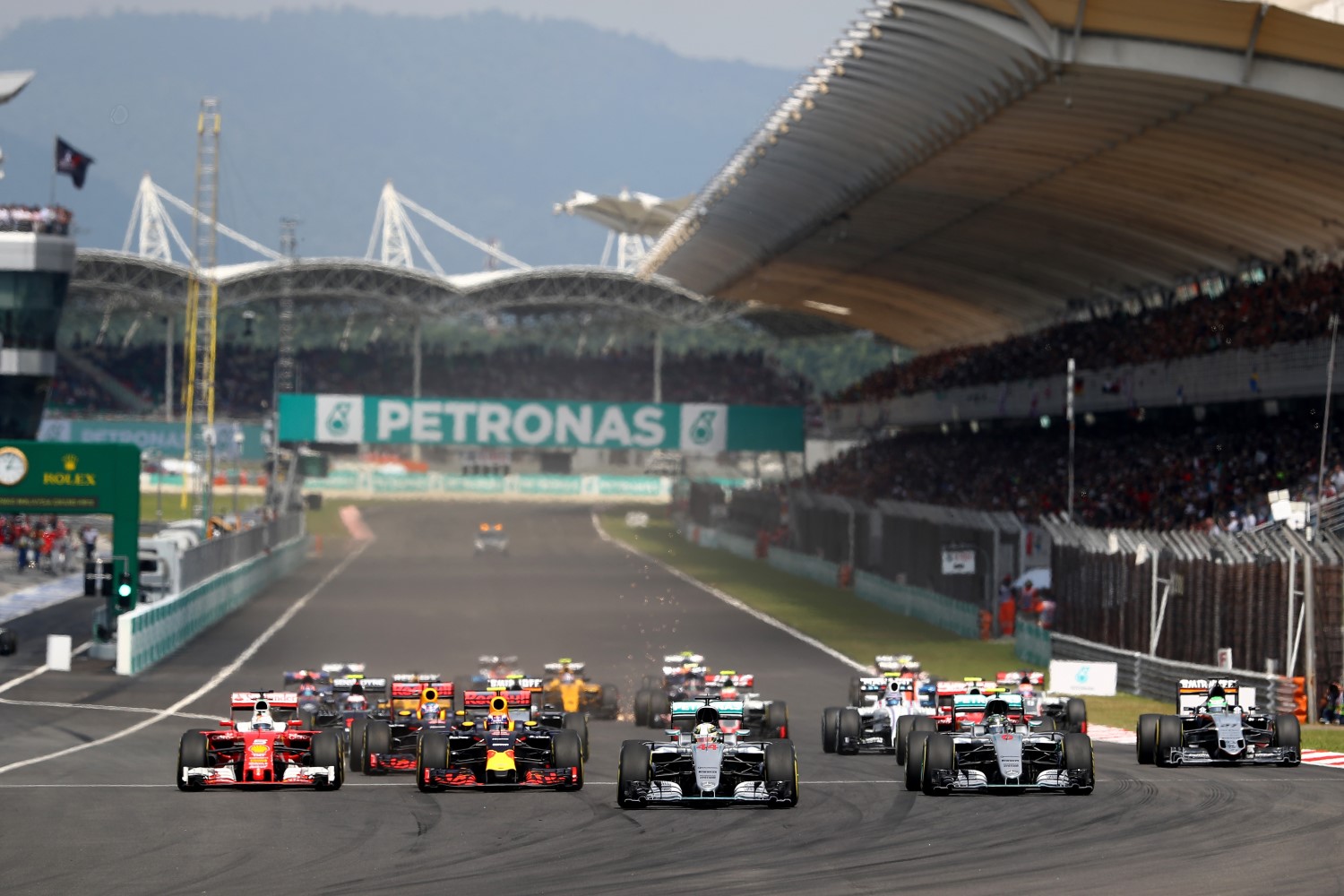 Race starts to be even harder in 2017 – report
(GMM) Drivers will find it even harder to make the perfect race start in 2017.

That is the claim of Germany's Auto Motor und Sport, revealing a little known detail of the new regulations for next season.

The development follows Mercedes and Force India having tested new steering wheels in practice towards the end of last season, featuring a long, single clutch lever at the rear.

F1 has already clamped down on the automation of F1 race getaways, but the German report said the rule tweaks for 2017 will make getting a good start even harder.

"It is the engineers' view that (from 2017) it will be much more common that revs will drop too much or the wheels will spin too much," said correspondent Michael Schmidt.

Ecclestone admits worrying about Rosberg successor
(GMM) Bernie Ecclestone has admitted he is worried Lewis Hamilton will utterly dominate in 2017.

We reported on Tuesday that, following Nico Rosberg's shock resignation and Mercedes' limited options to replace him, F1 supremo Ecclestone was in touch with Toto Wolff about the identity of Hamilton's next teammate.

"It (Hamilton dominating) would be bad for everybody and bad for Lewis as well, because I think he wants to win fair and wants to beat somebody," said Ecclestone.

So Bernie, 86, told Britain's Sky that Fernando Alonso and Sebastian Vettel might have been able to beat Hamilton.

"They (Mercedes) have said they couldn't have Fernando, because of the tangle (spygate) with McLaren. So they didn't try with him.

"Sebastian I think is happy with Ferrari and he certainly wouldn't break his contract," he added.

The leading candidates are therefore Valtteri Bottas and Pascal Wehrlein.

Ecclestone said: "I think one or two of them would be capable of performing. But I don't think anybody's going to beat Lewis.

"I hope I'm completely wrong and whoever goes and sits in the same team can beat him or hurry him up that he makes mistakes. My personal opinion is that it's not going to happen," he added.

Ecclestone said Max Verstappen might be one driver who can actually beat Hamilton, but the young Dutchman's boss Christian Horner said Red Bull will not let him go.

"They are all on long-term contracts so it wouldn't make any sense to feed one of your main opponents with one of your assets," Horner, also referring to Daniel Ricciardo and Carlos Sainz, told BBC radio.

Mercedes has instead targeted Valtteri Bottas, but although Wolff has made an offer, Williams is not willing to let him go, especially after signing 18-year-old Lance Stroll.

"Losing him would have a heavy impact on the team, especially in a season in which the rules are changing."

Therefore, Horner advised Mercedes to take a leaf out of Red Bull's book by taking a punt on a young driver like Wehrlein.

"You give these guys a chance," he said. "Let's see what people can do in a front running car."

Rosberg eyes role as driver manager
(GMM) Nico Rosberg has admitted his return to F1 in the future could be in the form of driver management.

Some pundits have suggested the 31-year-old German might get bored and try to make a comeback, but Rosberg insists that is not going to happen.

"I will find my adrenaline somewhere else in new projects," he told the French newspaper Le Figaro.

"I talked about movies as a joke, but there are so many things I want to do. Humanitarianism interests me a lot, and my wife is an architect and we have projects in this area.

"I would also like to stay close to racing in one way or another. But if I need adrenaline, there is always karting with my friends," he said.

As for F1 itself, Rosberg admitted that driver management is an option.

"The best would be a manager of a young driver," he said, "much like my father did with me. I could relive it from the other side of being a driver.

"Starting next year, I'll try to get back at the tracks," added Rosberg.

As for his notoriously thorny relationship with former karting teammate Lewis Hamilton, Rosberg admitted that becoming friends with the Briton again is also possible.

"These are beautiful memories," he said when showed a picture of him and Hamilton as 14-year-old "best friends".

"It was easier than today — there was karting and nothing else. Now it's complicated. But maybe with a little time, we can be friends again," Rosberg added.

The retired former Ferrari and Mercedes chief has been linked with a return to the sport, having worked recently as a consultant for new owners Liberty Media.

So with F1's quiet, green and complex 'power units' having been controversial since their debut in 2014, Brawn admitted that the end of the current rules in 2020 is an opportunity for the sport.

"F1 has to take a hard look at what it wants from an engine," he told the FIA's in-house magazine Auto.

Brawn said the sport wanted to align itself with the greener direction of road cars a few years ago, but that 2020 might be a chance to differentiate itself from the industry once again.

"If we don't, logic says we should have electric or fuel-cell F1 cars in a few years' time," he said.

"We have Formula E and that's establishing its place, but for me F1 isn't just a technological demonstration, it's a whole circus, and what's the best way of maintaining that?" added Brawn.

"It might be time to say 'We've had this technological marvel, but we're going to step back and think about what F1 ideally wants from an engine, which may have to contain some technologies that are relevant'.

"But the end of next year, formula one needs to know what sort of engine it needs for the future," said Brawn.

Ferrari losing Allison 'a mistake' – Symonds
(GMM) Ferrari must consider reorganizing its structure in order to return to the top of F1.

That is the advice of Pat Symonds, who is currently Williams' technical boss.

The 63-year-old Briton is now considering retirement, but he admitted to Italy's La Gazzetta dello Sport that he was offered a job by Ferrari no less than three times.

"The first was in 1996, when Michael Schumacher moved with Ross Brawn from Benetton," he revealed.

"I was a senior engineer at Benetton but I saw the possibility to become a technical director, so I wanted to stay," he said.

"The second offer came from Stefano Domenicali in 2012, and the third was in 2014," Symonds added.

However, he said Ferrari never felt right for him, and now he believes the so-called 'horizontal' organization structure at Ferrari is not working.

"In recent years, McLaren also introduced a non-pyramid shaped structure, but in formula one you need engineers with strong opinions and experts who are able to make decisions that set the direction.

"Ross Brawn was a prime example of such a man for Ferrari. And Rory Byrne. Sure, Ferrari can be successful again, but they need strong leadership.

"It was a mistake of them to let James Allison go," Symonds commented. "I don't know what happened internally, but I worked with James for many years and have a lot of respect for him.

"He's a great engineer and someone who can inspire his team. I think a Ferrari with Allison would be a stronger Ferrari," he insisted.

Rosberg retirement costs him $50-million
By all accounts Nico Rosberg's decision to quit Formula 1, only days after being crowned World Champion for the first time, was a spontaneous call by the German which in the end is likely to cost him around $50-million.

Asked about his contract during an interview with Canal+, Rosberg said, "I had a golden contract to continue with Mercedes, but money did not influenced my decision. Money was not really on my mind. Obviously, I know I'm in a privileged position and thanks to my work I have been able to earn a lot of money."

Ironically in June this year Gerhard Berger toiled tirelessly to seal the best deal from Mercedes for Rosberg. At one point there was a stalemate that delayed an agreement, but it was eventually ironed out.

At the time Kolner Express reported that Rosberg was given a salary increase by Mercedes from $18-million a year to $25-million a year, excluding performance based bonuses, for a period of two years – 2017 and 2018.

Rosberg acknowledged, "I know the amount of money that was stipulated in my contract, but it would not have made me any happier in the future, that's for sure."

The sport's 33rd Formula 1 World Champion is adamant that he will not be tempted to make a comeback and insists that it's a case of "mission accomplished and time to move on."