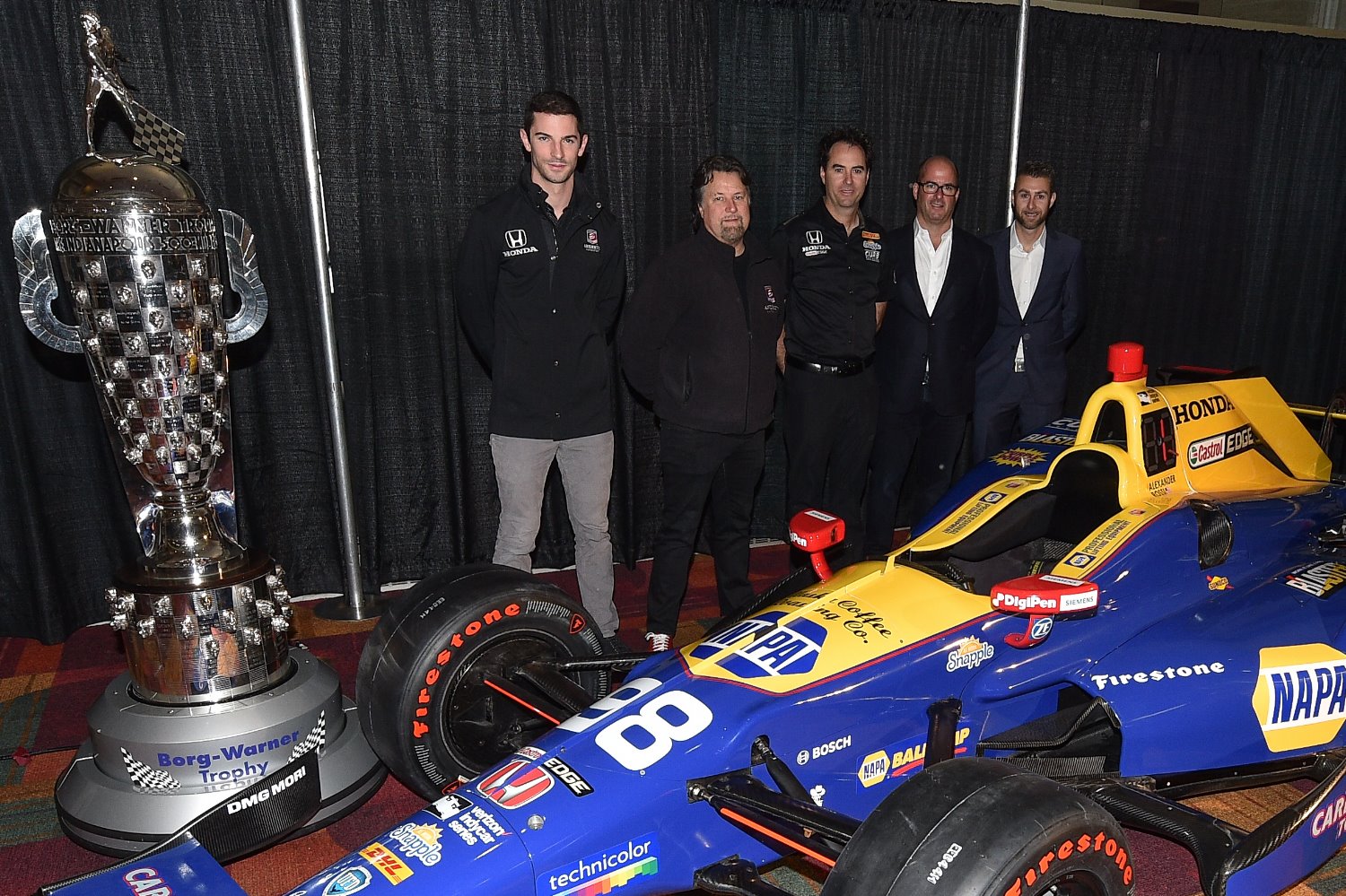 It had already been a very busy day for Alexander Rossi, as the winner of the 100th Running of the Indianapolis 500 presented by PennGrade Motor Oil had his sculpted face officially unveiled Wednesday on the iconic Borg-Warner Trophy.

After a multitude of media interviews and signing for eager autograph seekers at the Indianapolis Motor Speedway Museum event, Rossi had one more stop to make.

It was off to "Mo's, A Place for Steaks" where a select gathering of BorgWarner representatives, VIPs and media had dinner with Rossi. To Rossi's right was three-time Indianapolis 500 winner Bobby Unser. On his left was Paul Page, the long-time "Voice of the 500" on ABC and the IMS Radio Network.

That was before the biggest surprise of the evening, when four-time NASCAR Cup champion and five-time Brickyard 400 winner Jeff Gordon walked into the private room at Mo's to congratulate Rossi. Both drivers are from Northern California — Gordon from Vallejo and Rossi from Auburn — and they have followed each other's careers.

Rossi was honored and surprised by the visit from Gordon, who is in Indianapolis for the annual Performance Racing Industry trade show.

"That was very cool and a huge surprise," Rossi said. "Jeff is one of the icons of the sport and to be able to share a few moments with him and the BorgWarner family and media was very cool. The other highlight of the evening was getting to sit next to Bobby Unser all night. He’s a legend to Indy car racing and it was fantastic to hear his stories about what INDYCAR and the Indy 500 was like in his day and hear about how the sport has changed. I felt very privileged to be a part of it."

Rossi admitted he grew up a Gordon admirer.

"I was a Jeff Gordon fan from the sense when I was growing up he was dominating, so there was a huge following that he had," Rossi said. "Up until this year I had never been to a Cup race until I went to the Brickyard 400. NASCAR was something that wasn’t huge on my radar but being a part of a group of people from Northern California that have raced, it’s pretty cool.

"Maybe it’s something in the water up there."

Gordon's appearance at the annual dinner was brief but left a very positive impression on another driver whose face is on the Borg-Warner Trophy three times.

"BorgWarner always puts on a nice dinner and we have a wonderful time this year honoring the current Indianapolis 500 winner the night his image is put on the trophy," said Unser, who won "The Greatest Spectacle in Racing" in 1968, ’75 and ‘81. "It was great to catch up with this year's ‘500' winner Alexander Rossi and it was really neat that Jeff Gordon stopped by our dinner to congratulate Alexander and say hi to me.

"I've always been a fan of Jeff's. He put his foot down racing on the dirt in a sprint car and in a NASCAR stock car. I am fan, of both — Alexander and Jeff — fast American race car drivers."

Gordon's connection to Indianapolis Motor Speedway and open-wheel racing is deep. He moved to Pittsboro, Ind., when he was 13 so that he could compete in the United States Auto Club midget, sprint car and Silver Crown series. His racing hero was four-time Indianapolis 500 winner Rick Mears and Gordon's career was headed toward the Indianapolis 500.

Unfortunately, Gordon was unable to draw much interest from Indy car teams in the early 1990s. By that time, top NASCAR team owners were pursuing the open-wheel ace for a career in stock cars. Gordon moved to North Carolina when he was 20, began his Cup career with Hendrick Motorsports at 21 and won the inaugural Brickyard 400 two days after he turned 23 in 1994.

A generation later, Rossi began a racing career that would ultimately take him to Europe as a teenager as he was groomed for a career in Formula One. Rossi earned a ride with the Manor F1 team in 2015, making five starts, and was the team's reserve driver in 2016 even as he competed as a Verizon IndyCar Series rookie for Andretti-Herta Autosport.

Rossi, 25, achieved the biggest victory of his career in the 100th Indianapolis 500 on May 29 and was the Sunoco Rookie of the Year for that race and the season after finishing 11th in points.

Rossi has found a home in the Verizon IndyCar Series and, following his busy day on Wednesday, as his face became immortalized on the trophy as part of history, he is even more determined to excel in 2017. This morning at the PRI show, Gordon also stopped by when Rossi’s Indy 500-winning car was being presented to the Indianapolis Motor Speedway Museum for display.

Gordon joined Rossi and team co-owners Michael Andretti and Bryan Herta for photos. All it did was whet Rossi’s appetite to win the race again.

"I can't wait to add a second face to the Borg-Warner Trophy next May," Rossi said. "I want to make sure I get invited back to this dinner." Bruce Martin/IndyCar