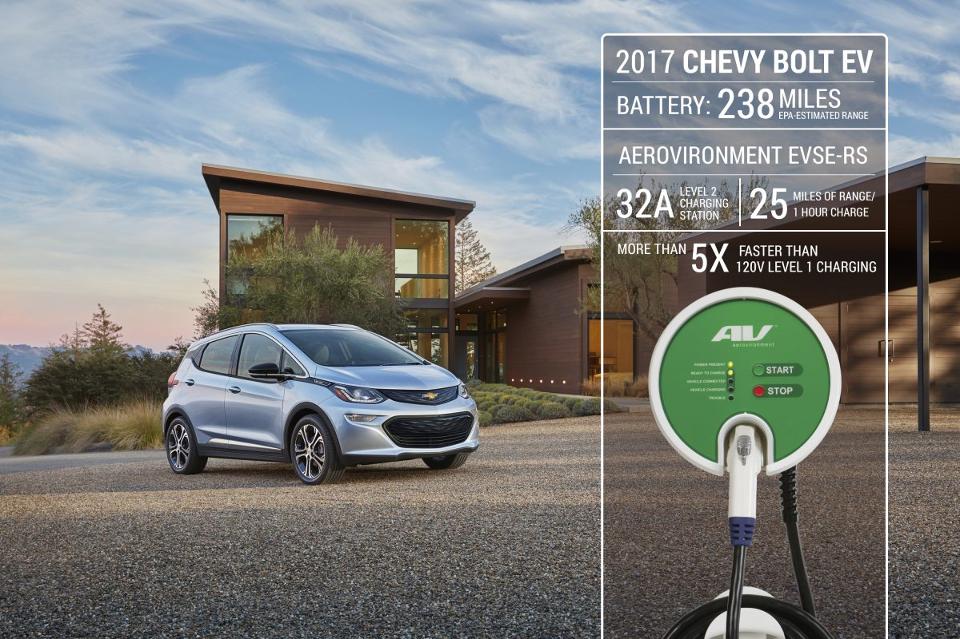 As the Chevrolet Bolt EV finally starts to arrive in dealerships this month, General Motors has a new approved accessory, AeroVironment's new 32-amp EVSE-RS charger. With an official EPA-estimated driving range of 238 miles, the Bolt is far less likely to require opportunistic charging during the course of an average day than prior mainstream electric cars. But in order to make sure you don't actually need to be on the lookout for public chargers when you're out and about, you'll want to make sure you leave home every day with a full battery and that's where AeroVironment comes into the picture.

GM and AeroVironment have a long relationship when it comes to electric cars. The California company actually developed and built the original GM Impact concept that was eventually transformed into the production EV1. These days, AeroVironment builds unmanned aircraft, missile systems and of course electric vehicle chargers.

With it's 60-kWh lithium ion battery, the Bolt is the first GM plug-in vehicle to support DC fast charging but most owners will probably be doing most of their charging at home. Most of the lower cost EVs available until now have been limited to charging at either 3.3 or 6.6-kW. GM bumped that up a bit to 7.2-kW on the Bolt and AeroVironment's new wall charger can fully support that rate, providing about 25 miles of range per hour at the plug.

For customers that don't already have an EV or a home charger, GM is making it easy to get this new unit by listing it as an official GM accessory. That means it will have a GM part number assigned and be available directly from GM dealers. No pricing has been announced yet, but AeroVironment's current 30-amp chargers run from $600 to $700 depending on cord length. Installation will of course cost extra with the amount depending on how much work an electrician needs to do. The chargers will be available this month at Chevrolet dealers in Oregon and California where the Bolt is going on sale first before spreading nationally in 2017. Forbes.com