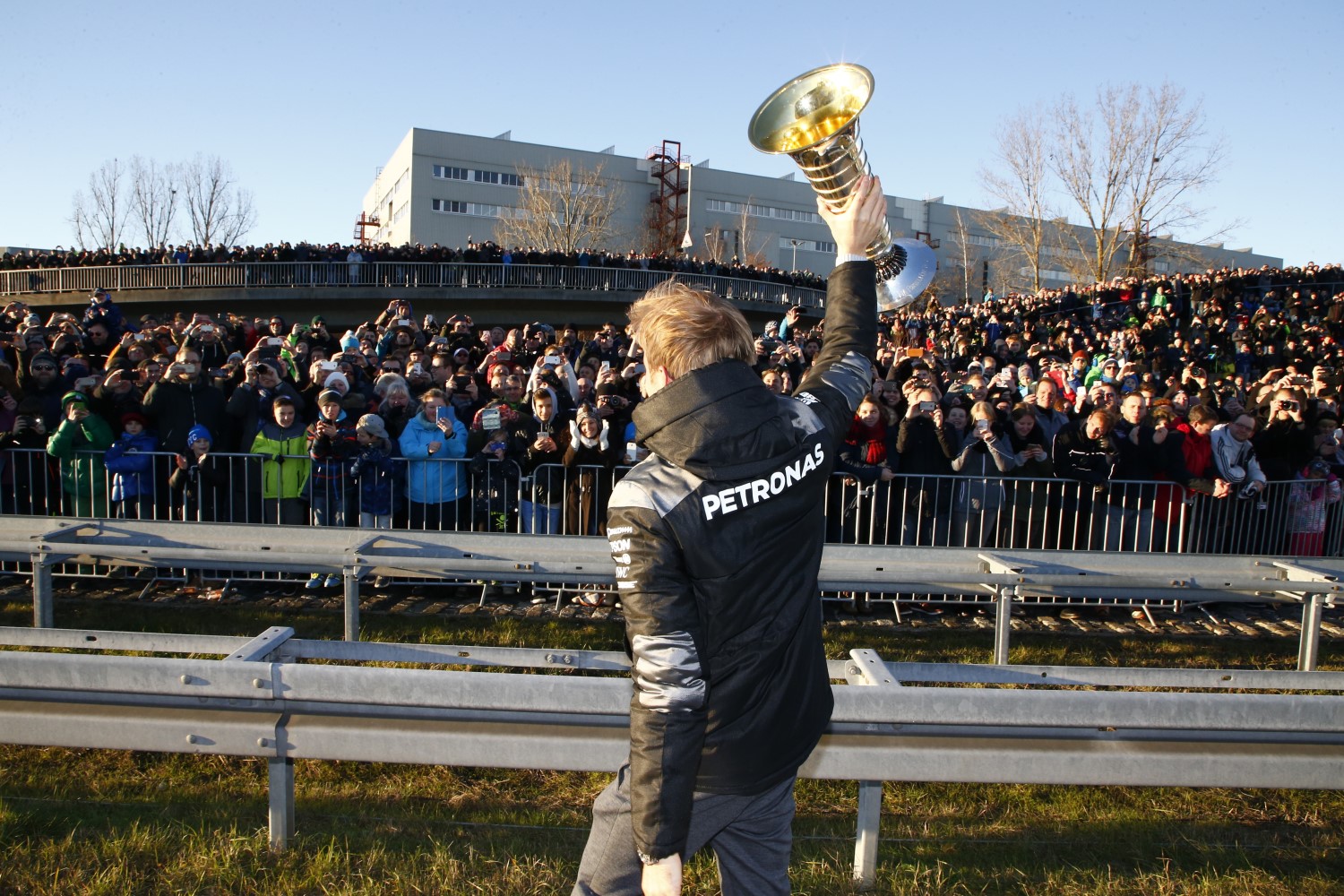 UPDATE Sindelfingen: "THANK YOU!" – this was the heartfelt message delivered by Formula One World Champion Nico Rosberg and team-mate Lewis Hamilton together with their Silver Arrows crew on Saturday. After recording a Formula One Drivers' and Constructors' World Championship hat-trick, it was high time to express gratitude for the immense support given by colleagues at Mercedes-Benz in the past three seasons. Rosberg also took the opportunity to say good-bye to everyone at Mercedes-Benz after announcing his retirement yesterday.

16,500 employees accepted the invitation to return to the Mercedes-Benz plant in Sindelfingen on Saturday for a celebration of the Formula One hat-trick with the freshly crowned World Champion Nico Rosberg, three-time World Champion Lewis Hamilton and the entire Silver Arrows team. The banner headline for the event was 'Motorsport meets Sindelfingen', so the employees and their families were treated to all the fun and glamor of the racetrack during the course of the afternoon.

There was a pit stop contest in which employees could try their hand at changing wheels and discover for themselves the standard required of the professional crews who fit a car with four new tires in under two seconds on a race weekend. In addition, there was an opportunity to demonstrate driving skills under track conditions on the DTM simulator. The drivers and team officials also gave fascinating insights into paddock life in a number of interview sessions.

But the demo laps on the Sindelfingen testing track were surely the highlight of the day. Among the vehicles given an outing were the Formula One World Championship-winning cars of 2014 and 2016 as well as various DTM and customer sports vehicles such as the Mercedes-AMG GT3. Not only the Formula One stars Nico Rosberg, Lewis Hamilton, Pascal Wehrlein and Esteban Ocon took their turn at the wheel but also the entire Mercedes-AMG DTM Team as well as junior talents such as Maximilian Gunther and Mick Schumacher. To round off the spectacular, there were appearances by motorsport legends David Coulthard, Bernd Maylander and DTM record champion Bernd Schneider.

Nico Rosberg, Mercedes AMG Petronas:
"It's hard to believe that almost a week has gone by since I won the title. And what a crazy week it has been! First came that amazingly tough race in Abu Dhabi, then the enormous sense of relief after crossing the finish line, and after that the emotional moments spent with the team and my family. Then on Tuesday, we had the World Championship celebrations with our team partner Petronas in Kuala Lumpur, and yesterday it was the FIA Prizegiving Gala in Vienna at which I announced my retirement from Formula One. At last, I got my hands on the championship trophy. For me, a childhood dream had come true. And now here I am today, standing in front of so many Mercedes-Benz employees and thanking them for the huge support they have given me and my motorsport family over the past years. I will never forget you. This is a very special feeling. It's been long and difficult road, but 2016 was my best ever Formula One season and I've also driven my best races this year. The whole thing was just mega."

Lewis Hamilton, Mercedes AMG Petronas:
"It is a real privilege to be part of this team and this brand, and to achieve such great success with this incredible bunch of guys. When I joined the team, I never dreamed that I would win so many races. Last Sunday was my 32nd Grand Prix win in a Silver Arrow. I am really grateful for this, and I thank each and every member of the team at our various sites. I've been a part of the Mercedes motorsport family since I was a child, and I've contested every one of my Formula One races in a Mercedes-powered car. It is therefore all the more important for me to be here today, at the heart of the company in Germany, and to say a big thank-you to all my colleagues here. I always draw so much strength and motivation from your support. As always, I've given my absolute best this season, but Nico has put in a fantastic performance and deserves the title. I know from my own experience what a great feeling it is to win the World Championship. That's why I can imagine how amazing the last few days must have been for him. Personally, I'm now looking forward to the winter break, then to going all out on attack again next year."

Dr Dieter Zetsche, CEO of Daimler AG and Head of Mercedes Benz Cars, said:
"This year, our Silver Arrows won the World Championship for the third time in a row to secure the perfect hat-trick. After 2015 – the hitherto most successful motorsport year in the history of our brand – the 2016 season now also goes down in the history books. Every member of the team merits my highest respect for this achievement. Formula One is contested at venues all around the world – from Melbourne to Abu Dhabi via Singapore. Today, we have brought the racetrack to the factory gates in Sindelfingen. We would like to thank our colleagues for the great support and work that they are doing here: they are all hat-trick winners."

Professor Dr Thomas Weber, Member of the Board of Management Research & Mercedes-Benz Cars Development:
"Motor racing is the fastest test lab in the world. This is about maximum performance, in which all components of the racing car are subjected to the highest imaginable load. With the introduction of Hybrid Power Units in the 2014 season, a new era began in Formula One, and our Silver Arrows have been setting the benchmark ever since. Contributing to this success on the racetrack is the work done right here in the Sindelfingen research laboratories and workshops. Conversely, the lessons learned from motorsport also flow back and help to make our series production vehicles even better. In Formula One, the development never stops. While we are congratulating Nico and the team on this historic hat-trick, many clever minds are already working hard on making the new racing car fit for the next season."

Markus SchÃ¤fer, Member of the Divisional Board of Mercedes-Benz Cars, Manufacturing and Supply Chain Management:
"The people working in Formula One and in production at our Mercedes-Benz plants know that it is only through a combination of the best technology and the best team that a World Championship is won. The event here at the Sindelfingen plant today is a great way of thanking our employees for their excellent input. Our factories around the world are working at full capacity, and we are heading at full throttle towards a new production record. This mirrors the achievements of our colleagues in the sphere of motor racing. Lewis Hamilton's triumph last weekend in the grand finale to the season in Abu Dhabi was the 150th in Formula One for a car powered by a Mercedes engine. More than a third of those were recorded in the last three years, during which our Silver Arrows won 51 of the 59 Grands Prix. One particularly impressive statistic is that 31 of these were one-two wins for Nico Rosberg and Lewis Hamilton. What an extraordinary team, and what a strong result!"

Toto Wolff, Head of Mercedes-Benz Motorsport:
"Nico has been an important part of our team since the start of the modern Silver Arrows era. He has experienced both good and difficult times but has always kept a level head. After his announcement yesterday, this event has been a wonderful way for him to say goodbye to all the Mercedes workers here. Lewis has also had a fantastic season. He is clearly one of the fastest and most talented drivers in the field, and the quality of his performance over the past few years has spurred Nico on to raise his own. We feel proud to be representing the 280,000 Daimler employees around the world. This season too, 1,500 team members in Brackley, Brixworth and Stuttgart have played their part in our successes. Thanks to their support, we have maintained the high level of the previous two championship-winning seasons and won 19 of the 21 races contested this year under the current set of regulations. That is an achievement we can all be proud of."