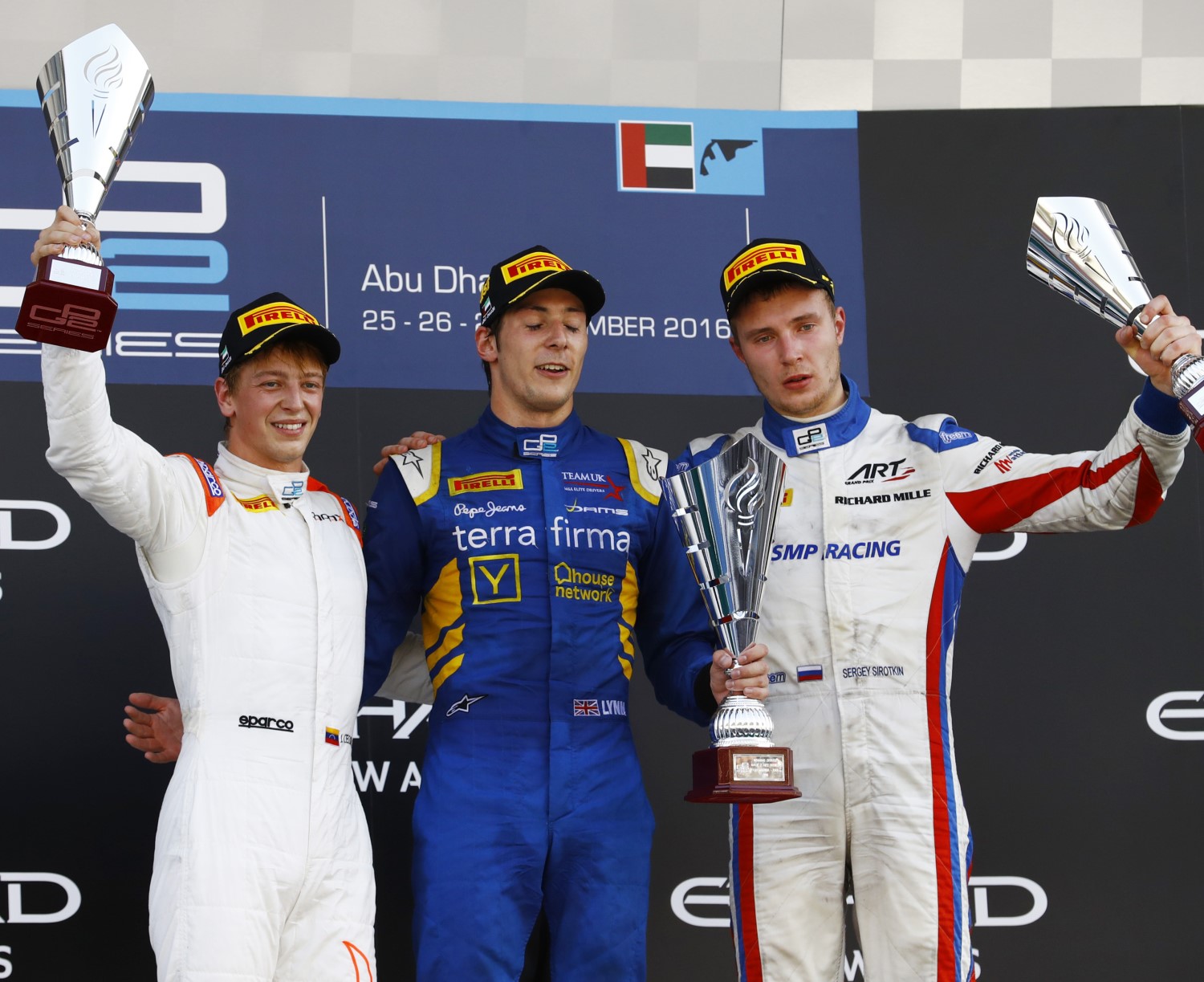 Alex Lynn dominated this afternoon’s Sprint Race in Abu Dhabi, claiming the final win of the 2016 season with an experienced, rapid run from lights to flag ahead of Johnny Cecotto and Sergey Sirotkin, while further back Antonio Giovinazzi could manage no better that P6, handing the title to teammate Pierre Gasly.

If most eyes were on the championship showdown between the PREMA Racing pair, the Williams tester started as though the race was set for him alone, easily holding the lead into turn one before flying away, while Norman Nato got away fast but lost out on the inside to Sirotkin and Cecotto, with Nobuharu Matsushita having a good getaway but getting stuck on the outside, while Giovinazzi and Gasly held station from their P6 and P8 grid slots, split by Artem Markelov.

Lynn had the beating of everyone today, and was determined to prove the point as he built a solid lead on track, while Nato was unable to keep pace with the leading trio, forming a train behind him. Matsushita needed 8 laps, and the best of his tires, to get by the Frenchman for P4: the title contenders were clearly faster than him, as was Markelov, but finding a way by was proving tougher than expected.

Giovinazzi could see his title challenge slipping away from him, but just couldn’t find a line around Nato, which gave Markelov some fresh impetus: the Russian had a go at him into turn 10 on lap 15 and the pair ran side by side around the hotel complex, but a small touch and a run across the grass put paid to his ambitions, despite the Italian running deep at the end of the back straight soon afterwards.

As the laps ran down Mitch Evans pushed ahead, overtaking a number of his rivals as a farewell present to the series. And on the last lap Lynn easily rolled to victory, with Cecotto taking advantage of race long pressure and slightly better tires to outdrag Sirotkin on the back straight for P2, with Matsushita finishing a lonely race in 4th. Nato soaked up the pressure from Giovinazzi to hold on for P5, with Markelov making do with 7th and Evans grabbing the final point in the hotel complex from a delighted Gasly, who stayed out of trouble to claim the 2016 GP2 drivers’ title from Giovinazzi and Sirotkin, while the 1-2 ensured PREMA Racing claimed the teams’ title in their maiden season, from Racing Engineering and RUSSIAN TIME.