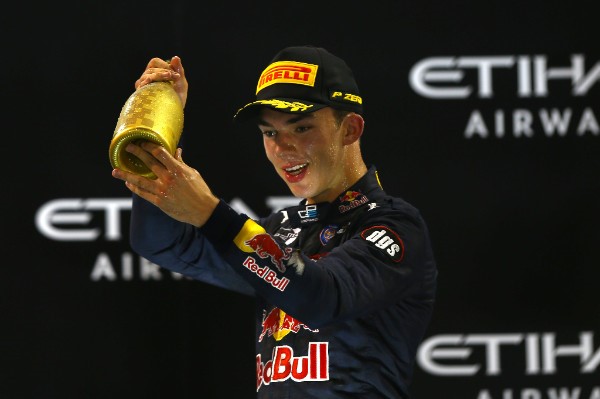 Pierre Gasly laid down a marker in the fight for the 2016 drivers' standings with an assertive fourth win of the season in this evening's Feature Race in Abu Dhabi: a great start and superb drive saw the Frenchman make the checkered flag almost 7 seconds ahead of Nobuharu Matsushita and Artem Markelov.

The Red Bull tester has led the way all weekend, and nothing changed when the lights went out: Gasly pulled away easily from fellow front row starter Sergey Sirotkin, who soon had his mirrors filled by teammate Matsushita and Oliver Rowland, who both had great starts, but the Russian held them off as Markelov and Antonio Giovinazzi slotted in behind the pair at Turn 1, ahead of Norman Nato and Alex Lynn.

Matsushita tried in vain to find a way past his slower teammate as Gasly left them all behind, building a lead to take to his early stop: the Frenchman led Sirotkin, Rowland, Markelov and Nato into the pits on lap 6 while further back title contender Giovinazzi was losing out to Lynn and Raffaele Marciello on worn tires, forcing him in one lap later but having lost time to his rivals in the process.

Gasly was soon setting a string of fastest laps as he set about tackling the last of the hard tire shod drivers, while at the front Matsushita was setting a superb pace as he tried to make the alternate strategy work for him, and Markelov ran a similar pace to stay just about in touch with the Frenchman and, crucially, just ahead of countryman Sirotkin, while Lynn in P2 was setting similar times just to throw a spanner in the works: if he could stay with Matsushita he would emerge from the pits in a strong position, which had title worrying concerns for Giovinazzi.

The 4 drivers swapped fastest laps as the race ran down: Matsushita and Lynn (who dropped a little time over the last few laps) finally pitted on lap 26, with the Japanese driver slotting into P3 on track and the Englishman out in P9, but all the work Markelov had done had taken too much life out his tires and Matsushita mugged him for second 4 laps later, with Lynn moving up through the field as the laps ticked down to zero.

And at the flag it was Gasly taking the plaudits for a superb win ahead of Matsushita, easily the best driver on the alternate strategy after claiming the fastest lap, with Markelov holding on to round out the podium ahead of Sirotkin, Giovinazzi finished a quiet race for him in P5, picking up a spot from Nato due to his 5 second penalty for speeding in the pitlane, Johnny Cecotto grabbed 7th ahead of Lynn and teammate Nicholas Latifi, with Marciello claiming the final point of the race.

The victory meant that Gasly reclaimed the lead in the drivers' standings from Giovinazzi with just one race remaining, 219 points to 207, with Marciello on 159 and Sirotkin on 147 points, while in the teams' title fight the fight for second behind PREMA Racing continues between RUSSIAN TIME on 254 points to Racing Engineering's 252. The fight for the 2016 title will be concluded in tomorrow morning's Sprint Race, which promises to be unmissable.