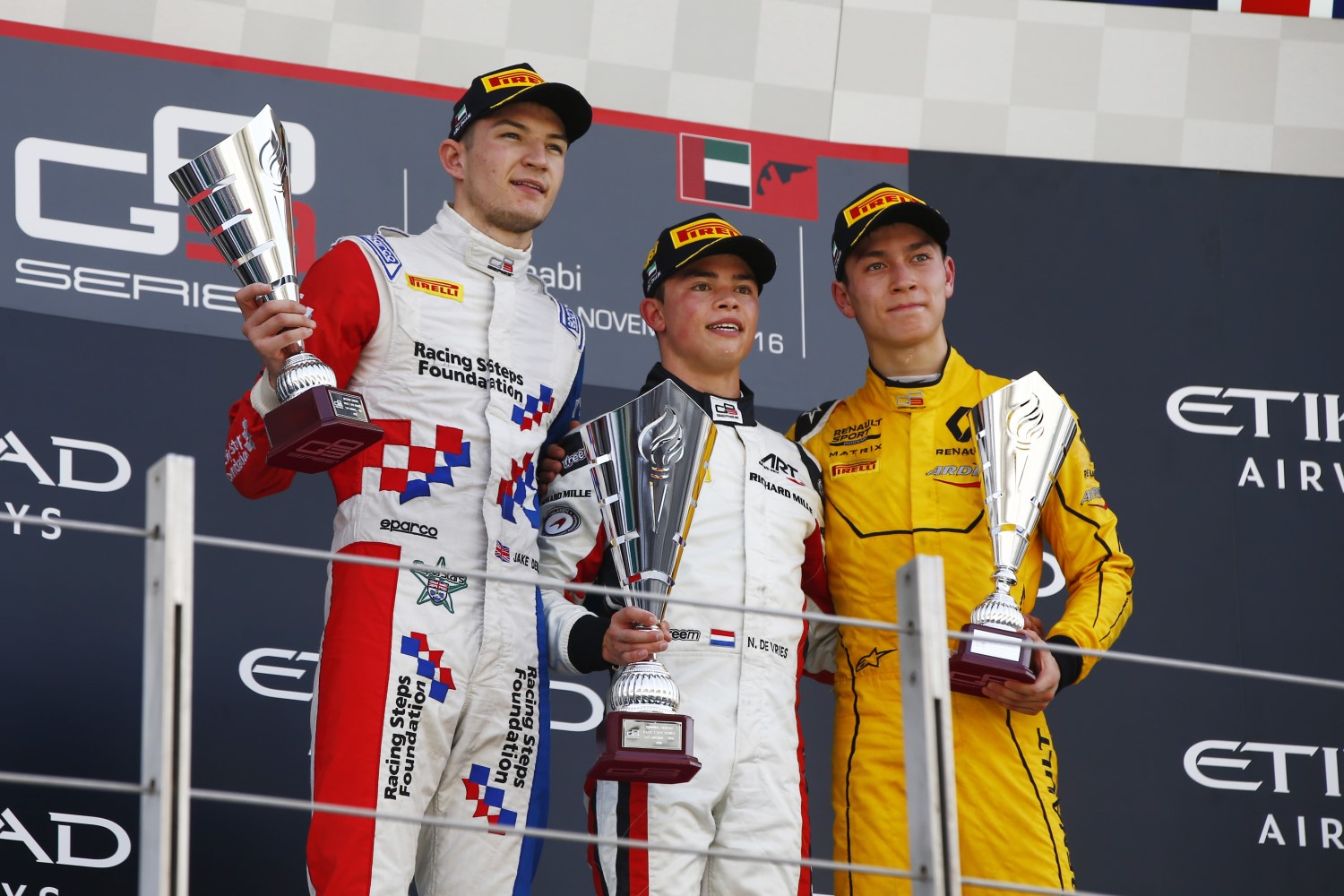 Ferrari Driver Academy and ART Grand Prix rookie Charles Leclerc started the 2016 GP3 Series season as a title favorite and today his dream became reality after a very eventful Race 1 at the Yas Marina Circuit. His title rival Alexander Albon (also from ART GP) started from reverse pole but suffered damage and retired during a battle for the lead of the race. Dutchman Nyck de Vries was victorious from the Arden International duo of Jake Dennis and Jack Aitken. The Monegasque also retired in dramatic fashion but he had done enough already to clinch the prestigious crown.

Albon started from pole and made a good getaway to retain the lead. Dennis from the front row lost several positions after a sluggish start, thus promoting Aitken and De Vries. It was a frenetic first lap with the top four drivers glued together. Leclerc remained in fifth at this point until DAMS’ Santino Ferrucci passed the ART driver at the close of the opening lap.

Lap 1 saw Trident’s Antonio Fuoco suffer a right front puncture after contact with Jenzer Motorsport’s Arjun Maini: the Italian finished outside of the points. Meanwhile a huge train of cars were sat behind Leclerc in P6 with Kevin Joerg the next one eager to make a move on the Series leader.

Aitken posted the fastest lap of the race in second place, putting the pressure on Albon in P1 who was leading by 2.6s, with Leclerc 7s adrift. The safety car was briefly deployed after Tatiana Calderon spun and stopped at Turn 1. Once the race resumed, the Thai racer controlled his getaway from Aitken well, but the Arden driver was ready to attack as the duo enjoyed a superb wheel to wheel battle for a number of corners with Aitken coming out on top.

Aitken held a half a second advantage over the ART driver but Albon was quick to retaliate and fought back into the lead of the race, knowing a win was vital to help his chances of remaining in the title battle.

On lap 11, disaster struck for Albon as he ran over the curb whilst dicing for the lead and his ART machine went airborne, making contact with Aitken. Albon’s race was over, as were his hopes of becoming champion. This promoted De Vries into the lead who had been holding off Dennis for the large majority of the race.

Ferrucci was holding onto the final podium position ahead of Leclerc. The Ferrari Driver Academy star was eager to celebrate his newly gained GP3 crown on the podium by passing the American driver but unfortunately there was a small contact between the pair, which resulted into the Monegasque having a puncture and retiring. Still, Leclerc had done enough to clinch the title and returned to the pitlane to celebrate with his ART GP squad.

Aitken carved his way past Ferrucci for P3 in a feisty battle; the DAMS driver was then issued with a 10s time penalty for forcing the Briton off track. Amidst all of the excitement, De Vries continued to drive a mature and confident race, keeping Dennis at bay to pocket his second GP3 win of the season by 1s. Aitken completed the rostrum ahead of Kevin Joerg – his best result in GP3 with fourth. Nirei Fukuzumi, Steijn Schothorst, Jake Hughes, Konstantin Tereschenko (also his best result), Ferrucci and Alex Palou completed the top ten.

The final race of the 2016 season gets underway at 13.00 local time (GMT+4) with Tereschenko on reverse pole alongside Hughes.

**10s time penalty issued for forcing another driver off track