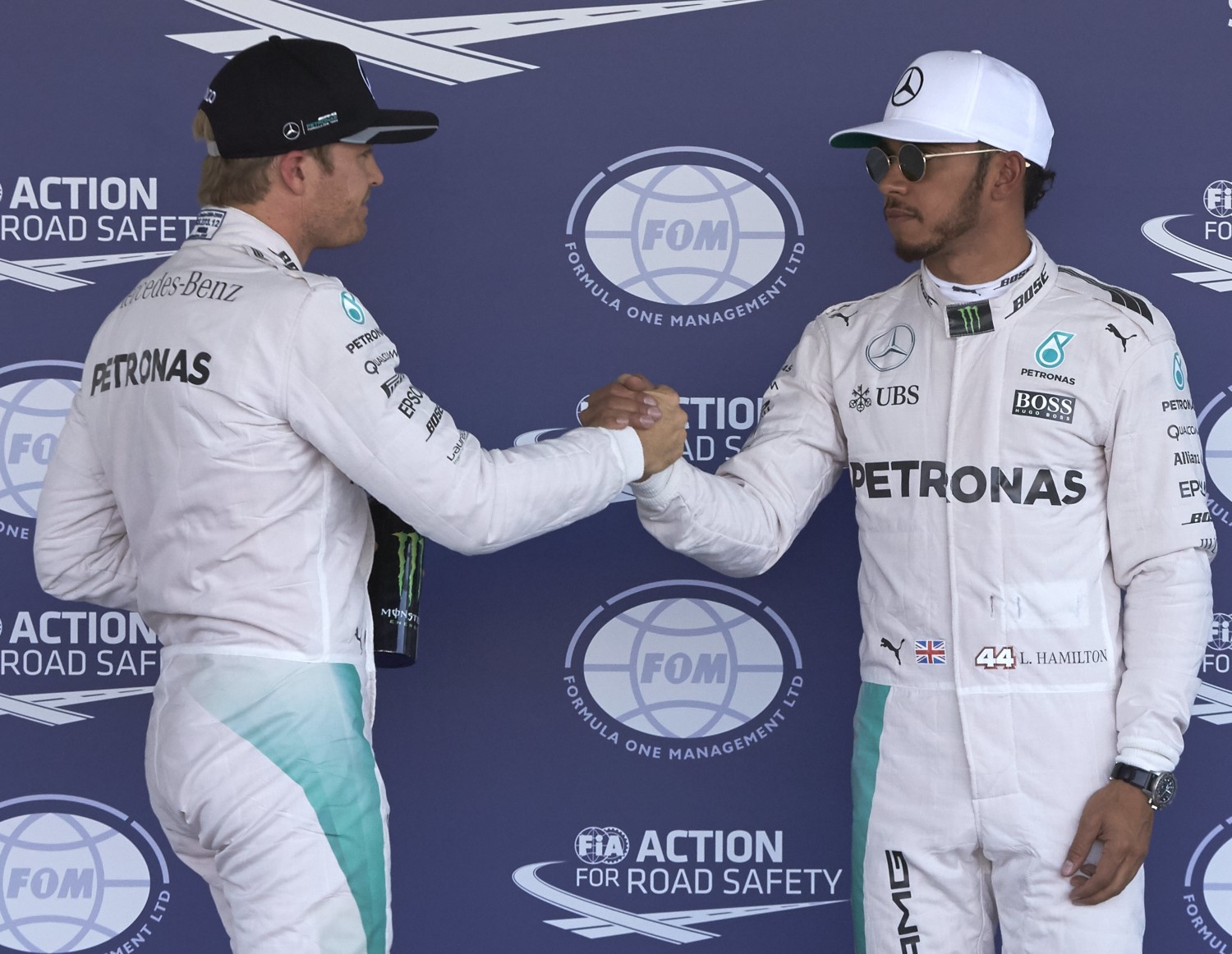 Sebastian Vettel put his Ferrari third ahead of Red Bull’s Max Verstappen and Daniel Ricciardo, barely a quarter of a second off the Mercedes, with team mate Kimi Raikkonen backing him up in sixth.

Both Williams made the top ten, with Valtteri Bottas seventh and Felipe Massa tenth. Between the white cars were the Force Indias of Sergio Perez and Nico Hulkenberg.

It was another troubled session for Toro Rosso, who were left scratching their heads after the second left-rear puncture in as many sessions for Daniil Kvyat. He and Carlos Sainz clocked up just nine laps before being confined to the garage as the Italian squad investigated.

Rosberg set the early pace on the soft Pirelli tires, with a lap of 1m 42.294s, at a time when Finnish twosome Raikkonen and Bottas had been fastest overall on the supersofts with 1m 42.257s and 1m 42.611s respectively.

Hamilton, meanwhile, battled with flat spots on his softs and continually struggled in the second sector, and at one stage feared he had a transmission problem and asked the team to check it while also rebalancing his wheels. It transpired that all was well.

When the wholesale switch to ultrasoft rubber came as everyone started their qualifying simulations, the trick became to generate sufficient heat in the tires as conditions cooled when dusk fell.

Behind them, the Red Bulls were very evenly matched, with Verstappen on 1m 41.389s and Ricciardo shadowing him with 1m 41.390s, though the Australian said he encountered some traffic and knew where he could gain more time. Raikkonen was sixth, with 1m 41.464s as Bottas fell to seventh.

McLaren had a better showing with Fernando Alonso 11th on 1m 42.366s and Jenson Button getting going after his earlier mechanical problems with 1m 42.823s for 12th. It was another trying session for Daniil Kvyat and Toro Rosso, as the young Russian found himself having a wild spin from Turn 16 to 17 after the left-rear tire yet again punctured. This time he made it back to the pits, but neither he nor team mate Carlos Sainz went out again as the Italian squad set about investigating the problem.

Lewis Hamilton
It's been a great day. Generally very smooth with no real issues. The first run in FP2 wasn't ideal as there was so much traffic and I didn't get to do a flying lap. But after that I managed to get a decent time in. Not perfect, as I was still feeling where the car was, but good enough. We got a lot of work done both on the short and long runs. I'm really happy with the car and we're in a good position for tomorrow. Pole is the goal for tomorrow. I haven't managed it at this track for a long time but I know I'm quick here, the car feels great and there's still some time in it, so that's my absolute focus right now.

Nico Rosberg
A decent start to the weekend. Straight away the car started off with a balance that was in the right area. It's always interesting going from hot conditions to cooler ones between the afternoon and evening sessions. Adapting to that and knowing what to expect can be a challenge but our car was working well in both conditions, on low and high fuel. Graining on the front tires when they're cold is the main thing we need to get to grips with in preparation for the race.

Paddy Lowe, Executive Director (Technical)
That was a solid start to the weekend. Both drivers struggled to put good laps together at various points in each session with traffic and the odd mistake. But our pace is looking reasonably good on both the single lap and on long runs. We have more work to do overnight to make sure we have our setup and strategy right for the weekend ahead. Tonight, these W07 cars will be built to race for the last time – cars that the team has labored over for thousands of hours. It's the first step towards the end of a quite incredible working life for these machines. Hopefully we can give them the send-off they deserve.

Kimi Raikkonen
Today we had a very normal Friday practice, trying different things. The car was working pretty fine: it’s just that I could not put a decent lap together, but overall it was a “basic" day. We had some tire graining, but this is very normal on the first day on track and it was not a big issue, as it’s going to change for the race. Now we just have to work here and there and we should be ok.

Sebastian Vettel
I am fairly happy with the day. Obviously, it is not ideal to have a gearbox issue on Friday, but I am not worried and it shouldn’t have any impact on the weekend. In general it was a very good Friday. This afternoon P1 was somewhat tricky, as we struggled a bit on the hot track. But during P2 in the evening things calmed down, the car also calmed down, it was quite good and I was happy. In the long run I struggled a bit with the front end, maybe I was a bit too aggressive, but overall the car felt good. To be honest, I think we should have a good pace. Hopefully tomorrow we have a similar feeling in Quali and put the car where it belongs.

Pirelli Tire Report
There was a high degree of track evolution on the Yas Marina circuit, especially during the FP1 session. This meant that a number of drivers set faster times on a harder compound compared to the softer ones that they ran previously, as conditions improved. However, by the late afternoon – when FP2 was run, at a similar time to qualifying and the race – track conditions had stabilized, meaning that representative times were set on each compound.

The FP2 session was held from 17:00, with track temperatures falling throughout the session by three degrees, and more than 10 degrees compared to FP1. As expected, the ultrasoft proved to be ultimately quickest, setting the fastest time of the day with Lewis Hamilton for Mercedes: 1m40.861s, more than a second quicker than last year’s FP2 time (set on supersoft).

The smooth nature of the surface and the varying track conditions meant that the speed differentials between the different compounds was reasonably small, compared to other tracks. So far, around 0.8 seconds separate the supersoft from the ultrasoft. Teams completed both race and qualifying simulations, with the top two Mercedes separated by just 0.079s.

Paul Hembery, Pirelli motorsport director: “As we expected, wear and degradation is reasonably high on the softest compounds, due to the high longitudinal acceleration and braking demands of this track. However, the pattern depends very much on the state of the track, which has been changing all day due to normal evolution and also falling temperatures in FP2. As a result, drivers are chasing a moving target when it comes to defining set-up and strategy, which adds an extra element to the challenge imposed by the championship finale. Already we have seen some of the run plans today influenced by the pre-event tire choices from each driver, giving an insight into individual strategies."

MOST LAPS BY COMPOUND

Tire statistics of the day: