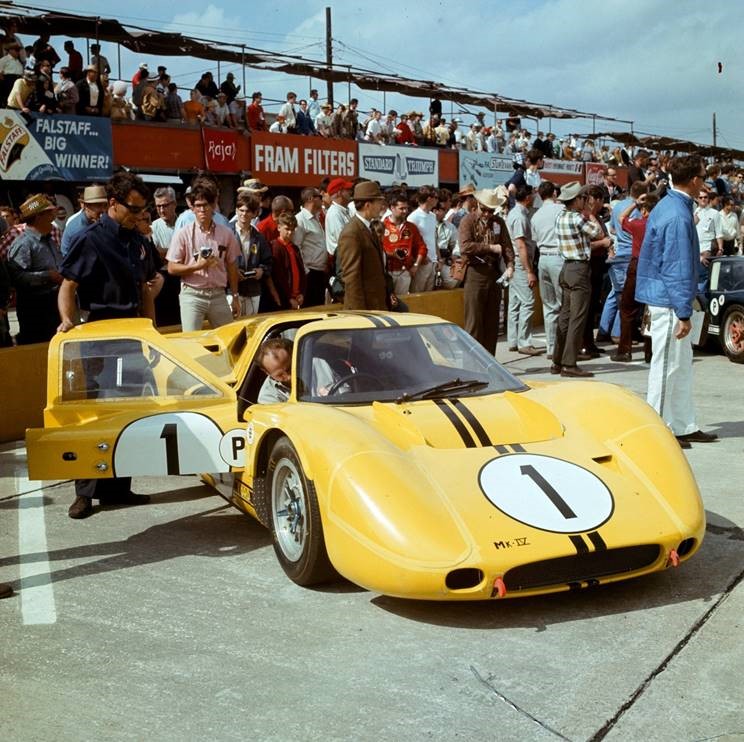 WATKINS GLEN, N.Y. – On June 19, 1966, the Ford GT40 Mk. II swept the podium at the 24 Hours of Le Mans, considered by many to be the greatest American triumph in international motorsports.

That accomplishment of 50 years ago, sealed by a follow-up victory in 1967, still fascinates racing fans. Award-winning journalist and author Preston Lerner will tell the intriguing story of the GT40 on Dec. 10 at the International Motor Racing Research Center.

The Watkins Glen Area Chamber of Commerce is a sponsor of the talk, which is free and open to all. The talk will be live-streamed at www.youtube.com/user/IMRRC/live or via the Center’s website at www.racingarchives.org/stream/. The talk also will be archived on the Center’s You Tube channel to watch in the future.

Chamber of Commerce President Rebekah Carroll will kick off the gathering when she draws the winning ticket for the IMRRC’s raffle of a Mazda MX-5 Miata. The car was generously donated by Mazda North American Operations.

MX-5 raffle tickets will be sold until 12:45 p.m., with the drawing at 1 p.m. More information about the raffle is available at http://www.racingarchives.org/news-and-events/news-item/2016-mazda-mx-5-miata-club-imrrc-raffle-car-2/.

Lerner, a California resident, has written about racing and a wide variety of other subjects for magazines ranging from Sports Illustrated to Smithsonian to Wired to The New York Times Magazine. A contributing writer at Automobile Magazine for nearly 25 years, he recently moved to a new position as a contributing editor at Road & Track. Besides "Ford GT," he is the author of three other books about racing and one novel, "Fools on the Hill," which has absolutely nothing to do with motorsports.

"I'm thrilled to be visiting the International Motor Racing Research Center at Watkins Glen, the spiritual home of American road racing, and getting an opportunity to tell the story of the Ford GT," Lerner said. "I'm biased here, but I believe Ford's victories at Le Mans in 1966 and 1967 are the greatest American accomplishments in international motorsports, and I'm eager to share the backstory behind them."

Lerner teamed with photographer Dave Friedman for "Ford GT," which in August won a Silver Award from the International Automotive Media Competition. Friedman was Shelby American's official photographer in the 1960s.

The book was published by Motorbooks late in 2015 and has received good reviews.

"The photo history blends perfectly with Lerner’s well-paced and well-researched tale of the legendary 40-inch-tall racing car," a reviewer with LACar.com writes. "Lerner’s reputation as motorsports writer is for unflinching accuracy born of a deep respect for his subject matter. Lerner’s writing style is very ‘present’. The stories, whether deep background information or direct accounts of the action, are all written in a tempo that reads like fresh information."

Don Capps, chairman of the Society of Automotive Historians International Motor Sports History Section and a friend of the IMRRC, reviewed Lerner’s book for Speedreaders.info.

"Ford GT," he writes, is "thoughtful and nuanced in its interpretations, the material gathered while conducting research marshalled so as to allow the reader to follow Lerner’s line of inquiry and thinking regarding several of the issues and controversies regarding Ford’s aims at Le Mans."

The book will be available for purchase at the Racing Research Center.

The International Motor Racing Research Center, a 501 (c)(3) charitable organization, is an archival and research library dedicated to the preservation and sharing of the materials of motorsports history, of all series and all tracks, worldwide.