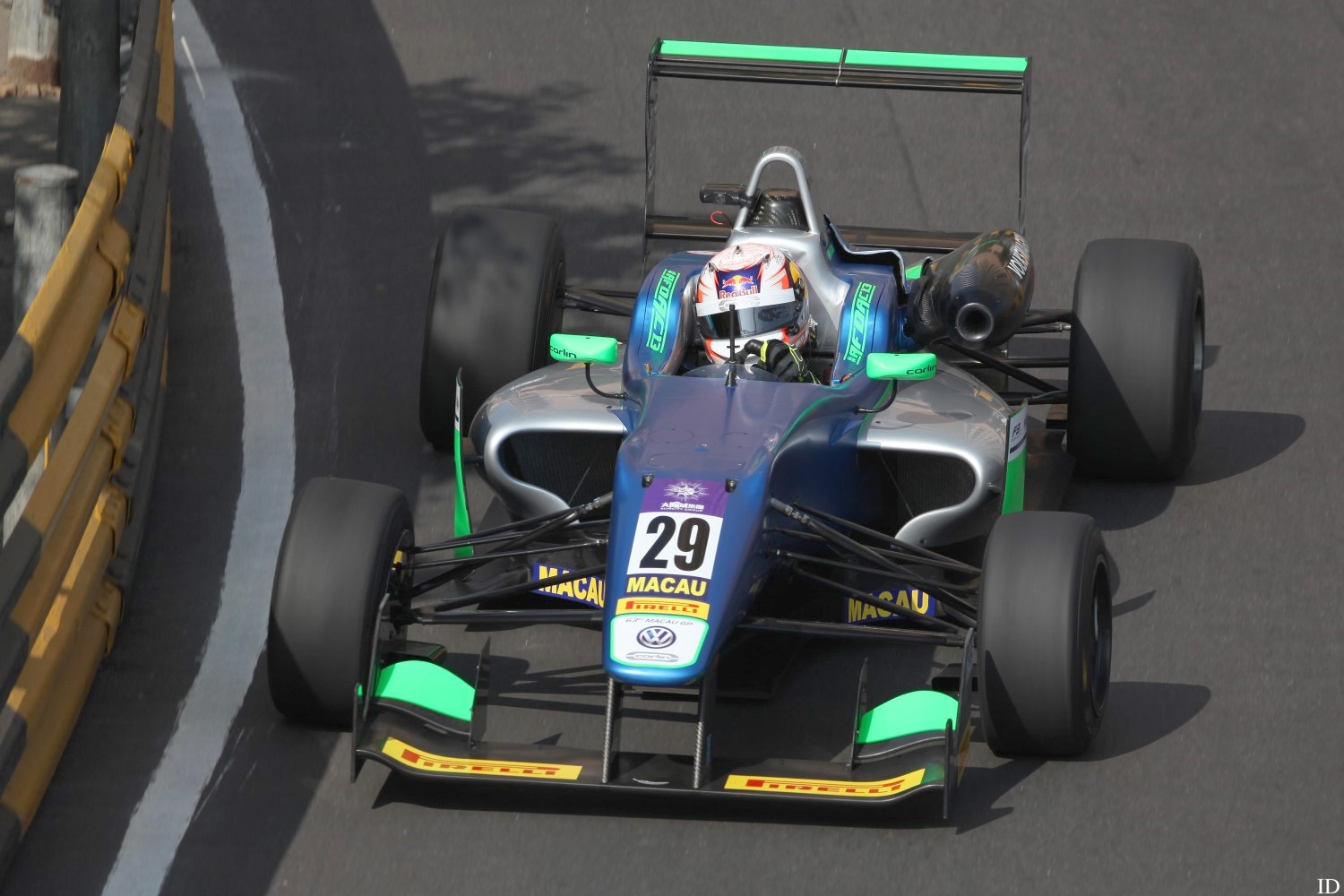 Antonio Felix da Costa passed Callum Ilott for the win in the qualification race for the Macau Grand Prix as he bids for his second win in the Formula 3 event.

Da Costa, returning to the Carlin Dallara-Volkswagen team with which he won Macau in 2012, slipstreamed past race leader Ilott at the end of a caution period, and although Ilott closed in, setting fastest lap on the penultimate tour but came up 0.850 seconds short at the finish.

"I had not done a single practice start before today, but luckily it was OK," said da Costa.

"My car was good, and it gave me the confidence to push straight away.

"Callum did a good restart – he did what he needed to do but I was just close enough. It's very hard out there – I'm used to power-steering now so I was struggling with my arms a bit!"

A welcome win for Carlin after a tough European F3 season, da Costa will start the all-important final now from pole position, with Ilott alongside.

Red Bull junior Sergio Sette Camara completed the podium, ahead of Japanese F3 champion Kenta Yamashita and pole sitter George Russell, who paid the price for a poor start as he slipped back from the beginning.

The event's 2012 winner – back in the race for the first time since then at the ripe old age of 25, gave a lesson in pure Formula Three racing to a field packed with teenaged up-and-comers as he nailed pole position for Sunday's edition.

"Experience helps," said Da Costa. "It's always a good thing. I feel a little old this week next to these guys. But it's good that I'm out there in front as these young guys are quick."

In the four years since his victory here, Da Costa (Carlin) has raced in pretty much every other class except Formula Three but has slipped back into the groove nicely this week.

"It's feeling better and better as this week goes on," he said.

After starting third on the qualifying race grid – behind British 18-year-olds George Russell (Hitech GP) and Callum Ilott (Van Amersfoort Racing) – Da Costa made the afternoon his own with one short, sharp and quite brilliant piece of racing.

There was mayhem shortly after the start but when full race speed resumed on lap five, Da Costa tucked in behind leader Ilott, and then took him on the inside at the Lisboa bend with a deft piece of skill. The youngster didn't seem to know where his rival had sprung from.

"Again experience helped," said Da Costa. "I knew exactly what I wanted to do and that helped me take control. Tomorrow will be another matter of course but for now I am happy."

Qualifying had been delayed for just over an hour after rainwater flooded from the grandstands near the Lisboa bend and on to the track. Macau is certainly a city that throws up the unexpected.

It took only to the first time the field hit the Mandarin bend for things to go pear shaped. Maximilian Gunther (SJM Theodore Racing by Prema), Lando Norris (Carlin), Anthonie Hubert (Van Amersfoort Racing) and Hong Le Yi (B-Max Racing Team) coming to grief into the metalwork – and into each other.

Hong's teammate Daiki Sasaki should hit the local gambling tables, just is his luck. Somehow Sasaki escaped injury when Hong's car flew into his back, one wheel coming frighteningly close to contact with the Japanese driver's helmet.

Conditions then called for calm nerves, and da Costa produced his master class, to take pole today in front of Ilott and Sergio Sette Camara (Carlin).

"It was all a bit nerve-wracking," admitted Ilott. "But I'm happy enough with second."