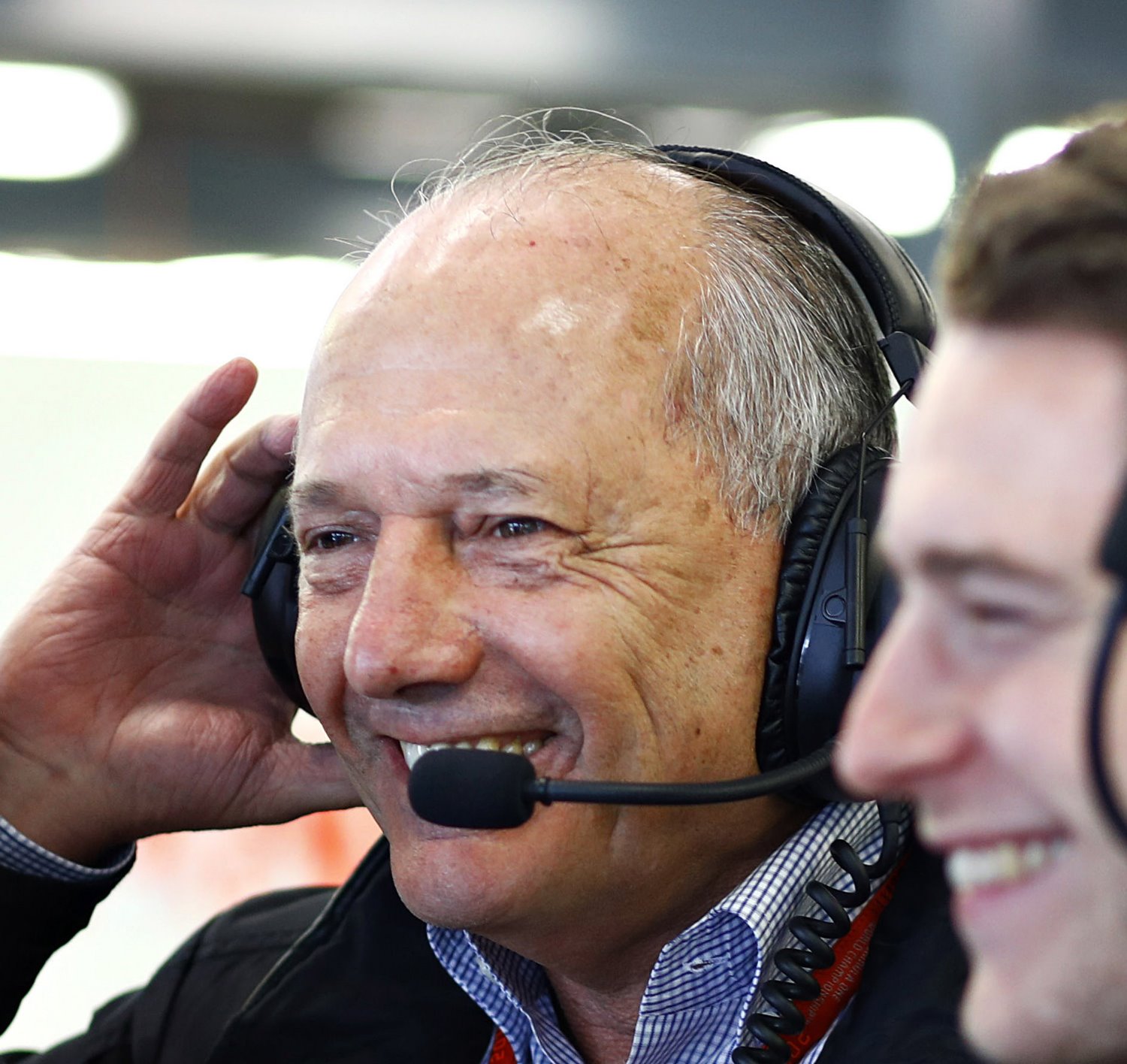 Personal rift, China deal behind Dennis exit
(GMM) A personal rift and a buyout bid by Chinese investors are seemingly behind Ron Dennis' sudden exit from F1 and McLaren.

Although the 69-year-old's ousting has only now been confirmed, rumors of a falling out between his long-time ally and fellow shareholder Mansour Ojjeh, and McLaren's Bahraini co-owners, have been circulating for some time.

"There has been a fall out and Ron's style of management didn't quite suit people who owned the company," former F1 team owner Eddie Jordan told the Irish broadcaster RTE.

According to reports, the mess hit the fan when Dennis presented a buyout bid by a group of Chinese investors to Ojjeh and Bahrain.

"There is no doubt the Chinese bid, which is very real, is behind all this," an unnamed source told China Daily.

"The Bahrainis don't want to sell and that's what caused the problem."

Dennis' exit – beginning with 'gardening leave' until his current contract expires in January – is now official, but the common refrain in F1 circles is that it is a shame.

"The trouble is that this whole thing is personal," F1 supremo Bernie Ecclestone said. "Once people fall out, it becomes difficult.

"But I hope they can get together and work something out for everyone's sake. Ron is a big shareholder and he can still have his say."

At the moment, any reconciliation appears likely, especially as Dennis fought Ojjeh and Bahrain to the death through the court system.

"It is a shame the way he has left, going to the high court, trying to defy it and not accepting it," said Jordan.

"Ron should have left in the highest applause, just like we saw Massa being applauded by the people in Brazil."

Agreeing that it is a shame is Sir Geoffrey Vos, the judge who ruled against Dennis' bid for an injunction last week.

"It is extraordinary that parties who have been so closely involved for so long have come to this scale of litigation so close to the end of their relationship," he said.

"There is not so much between the parties as they think. Even at this late stage, I would urge them to consider whether their differences cannot be reconciled outside court."

Verstappen 'aggressive all the time' – Ocon
(GMM) Esteban Ocon says he does not look back with fondness on his past duels with F1 sensation Max Verstappen.

The pair have been wheel-to-wheel since their karting days, and Frenchman Ocon – to step up from Manor to Force India next year – says it has always been intense with Verstappen.

"We fought hard all the time, like in F3," he told the Dutch publication Formule 1.

Ocon, who is a year older than 19-year-old Verstappen, is referring to the 2014 championship won by the Frenchman.

"The battle was heavy and intense," he said. "I was usually quicker in qualifying, him in the race."

Asked if it was a pleasant battle, Ocon answered: "No it was not!

"It was often on the verge of dangerous. But we never crashed, so you can conclude that it was a hard but fair fight."

Ocon said Verstappen is "a lot more aggressive" than him, explaining: "I mean, I'm aggressive when I really need to be, not all the time. I think first before I take aggressive risks.

"That the big difference between me and Max," he said.

"But I think we have since become more mature."

Time to stop safety advances – Kvyat
(GMM) F1 is now safe enough that it can think about speeding up and spicing up the show, according to Russian driver Daniil Kvyat.

However, many of his rivals support the status quo, where more and more safety advances like Halo and red flags for rainy races are becoming the norm.

"They're supposed to drive and do their fighting on the track," he is quoted by Auto Motor und Sport, "just as it was for us 40 years ago.

"At that time, the sport was 1000 times more dangerous but we kept to unwritten rules. For me the best was in Brazil, where Alonso threatened to have Vettel off next time," the Mercedes team chairman added.

But there are signs that things are changing.

"The rules should be written so that I understand them," Bernie Ecclestone reportedly said.

Toro Rosso driver Kvyat agrees that it is time F1 hit reverse gear and thought more about the show, particularly after the constant stoppages for rain in Brazil.

"Formula one has made a lot of steps in safety and I believe we have now reached the right level," he told reporters in Moscow this week.

"So I think it's time to stop. It's fascinating for everybody to watch races in these conditions, so I think we need to find a very important balance between speed, entertainment and safety," said Kvyat.

Smedley and Massa's careers have been closely linked, with the pair working together as engineer and driver at Ferrari and moving on together to Williams in 2014.

But more than that, they are friends, with Briton Smedley telling Brazil's UOL that he got an early insight into Massa's retirement decision in July.

"We went on holiday together to Ibiza in July with our families," Smedley said.

"He told me about it (his retirement) when we were there. At the time, he hadn't fully decided, but my feeling is that he was almost there.

"My feeling was that he was right and I couldn't advise him differently. In fact, I was glad that he didn't start going down the grid, with each move moving to a worse team, and I was happy for him," Smedley added.

And because they are close friends, Smedley said he is particularly pleased from Massa's family's point of view.

"As much as I love Felipe, I was happy for his family," he said. "His mother and father and his wife are very good people. He'll be more of a father and more of a husband now.

"Of course he will miss some things from here, but the truth is that there are not too many things to miss about the paddock," said Smedley.

In fact, Smedley admitted he is also looking ahead to when he too begins to ease off the F1 throttle.

"It's not connected to what Felipe is doing," he insisted, "but I've been travelling to every race for almost 20 years, and it's a long time.

"So I'm thinking that in two or three years I'll want to slow down a little. For professional reasons, coming to the races is the right thing, but on the personal side, I really miss my family.

"I feel it's the right thing to do," Smedley explained. "I will still be part of formula one and Williams. I am committed to helping to rebuild the team, but it doesn't mean I have to come to every race for the next 20 years."

New F1 Owner Liberty Media Looking To Expand Race Calendar
Liberty Media CEO Greg Maffei said that the company is "looking to expand" the number of Formula 1 races, "hoping to cash in on the glamorous appeal of its newly acquired asset," according to Harro Ten Wolde of REUTERS.

Formula 1 has a record-equaling 21 races this season and teams have "historically been reluctant to go beyond that number," but Maffei told investors at the Morgan Stanley Technology, Media & Telecoms conference that "there was room for more."

He said, "There is a general line of interest if you increase the number of races to a point. The FIA makes more money, the teams make more money, we make more money." F1 "faces a major shake-up after Liberty Media agreed to take control of the cash-generating sport."

Liberty Media has acquired an initial 18.7% stake from controlling shareholder CVC Capital Partners and "plans to complete a cash and shares deal" by the first quarter of '17. The deal, which has an enterprise value of $8B, is "expected to lead to a new push to develop the U.S. market and win fresh audiences around the world."

Maffei said that expanding the racing calendar "may be a way to do this."

He said, "Obviously there is a limit on how much you can do. Just getting the cars around the world, but I think we can expect to grow the amount of races to a mild degree." Reuters

Promoter of the Brazilian GP is confident of finding another world class event
With the Brazilian Grand Prix one of three events on the provisional 2017 F1 calendar still 'subject to confirmation', the promoter of the event has said he can live without F1 and will not lose sleep if it is dropped.

Speaking last week Bernie Ecclestone said that Canada, one of the three doubtful events, appears safe, while there remains serious doubt over Brazil and Germany.

Asked if he would bet on Brazil taking place in 2017, he told Motorsport.com: "I wouldn't put my money on it, I might put yours."

Prior to the Grand Prix, Ecclestone met with President Michel Temer in Brasilia, the President only having taken office in August. While there was no subsequent press conference, it's believed that Ecclestone called on the President for government backing for the event, though he denied this.

While promoter Tama Rohonyi believes the race, popular with drivers and fans alike, will be on the calendar when it is confirmed later this month, if it is dropped it will not be the end of the world.

"People come to Interlagos because they are petrolheads and once a year, they want a big international race," he told Autosport.

"I'm in the business of running international motor races and if I can't run F1, which I have been running for 42 years… it's like if Pavarotti dies, you get another singer," he continued. "You have an opera house and you have to fill the seats so that's what I'll do. I don't lose sleep over that."

Citing the current economic situation in the country, he said: "We lost important sponsorship by state companies, the state bank, the oil company, the state trading company and even Shell, which used to be a big client here, but I'm confident we'll be OK."

Recently elected mayor, Joao Doria, who is due to be sworn in on January 1, is known to be a keen fan of the event and is seeking to extend the contracts.

"The only way to bring this to a conclusion is to extend the contract to 2028 or 2024," said Rohonyi. "I would imagine 2028 will be the target because we have to mobilise so many companies, so many people and so many political clubs. All these people will say, quite logically, 'we'll put our weight behind this but let's do long-term'."

With Felipe Massa retiring next week and Felipe Nasr yet to secure a drive, Brazil could be facing the first full season of not being represented on the F1 grid since 1969.

Nonetheless, Rohonyi insists this would not impact attendance at Interlagos come race day.

"We get around 55,000, the country has 200 million people so I think it's reasonable to assume there are 55,000 people who are so mad about F1, they will still come and see the greatest drivers," he said. Pitpass