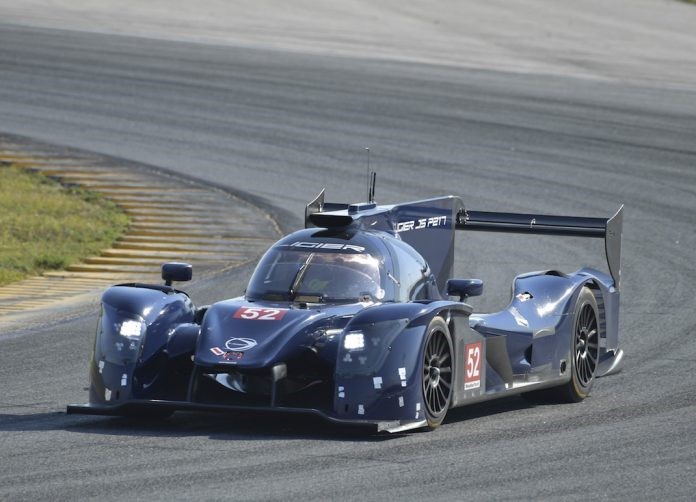 DAYTONA BEACH, Fla. — Longtime Prototype Challenge competitor PR1/Mathiasen Motorsports has stepped up to the Prototype class with the intention of running a Gibson-powered Ligier JS P217 in the IMSA WeatherTech SportsCar Championship next season.

"It's an exciting change," team owner Bobby Oergel said during testing Wednesday at Daytona Int'l Speedway. "We loved the PC category and what it was all about – still do to be quite honest. But the end result is that as a team, this is a move up in the direction that we ultimately want to go. We're excited, it's a lot of fun."

PR1/Mathiasen Motorsports partnered with Onroak Automotive to bring the new Ligier Stateside, a partnership that was important to both parties.

"The only way we were going to do this was by partnering up and working with a manufacturer like Onroak," Oergel said. "The hardest piece for us is knowing and not knowing the ins and outs of the machinery, and they obviously know the machinery from when it was nothing. To me, it's the only way to do it if you're going to do it."

Participating in the two-day test was the initial North American test for the new Ligier, but Onroak is no stranger to success on this side of the pond.

"We rolled in at 5:30 Tuesday morning and rolled it out of the freighter and started assembling things, but the car had already run around 10,000 plus kilometers overseas. We just needed to ready it for here," explained Oergel.

On the technical and performance fronts, the car is definitely a big change for PR1/Mathiasen Motorsports. Tom Kimber-Smith turned laps for the team on Tuesday and was very pleased with the car.

"Yesterday was our first sample of the car, and so far so good. The car is super-fast, really good fun," said Kimber-Smith. "All the power seems to be at the top end, so it feels more like a traditional race engine, whereas the PC car was very torquey all the way through the power band. This is much peakier. There's a lot of aero, a lot of straight line speed."

The car ran both days of the test without issue, and Kimber-Smith looks forward to the coming season in the Ligier.

"It's great having Onroak here with us," he said. "PR1 is more than capable of running the car, but having this extra support here is fantastic. They're pointing out things that we can do better or procedures that we need to adapt. Having these guys here, and having them here for the year is a big bonus for us."