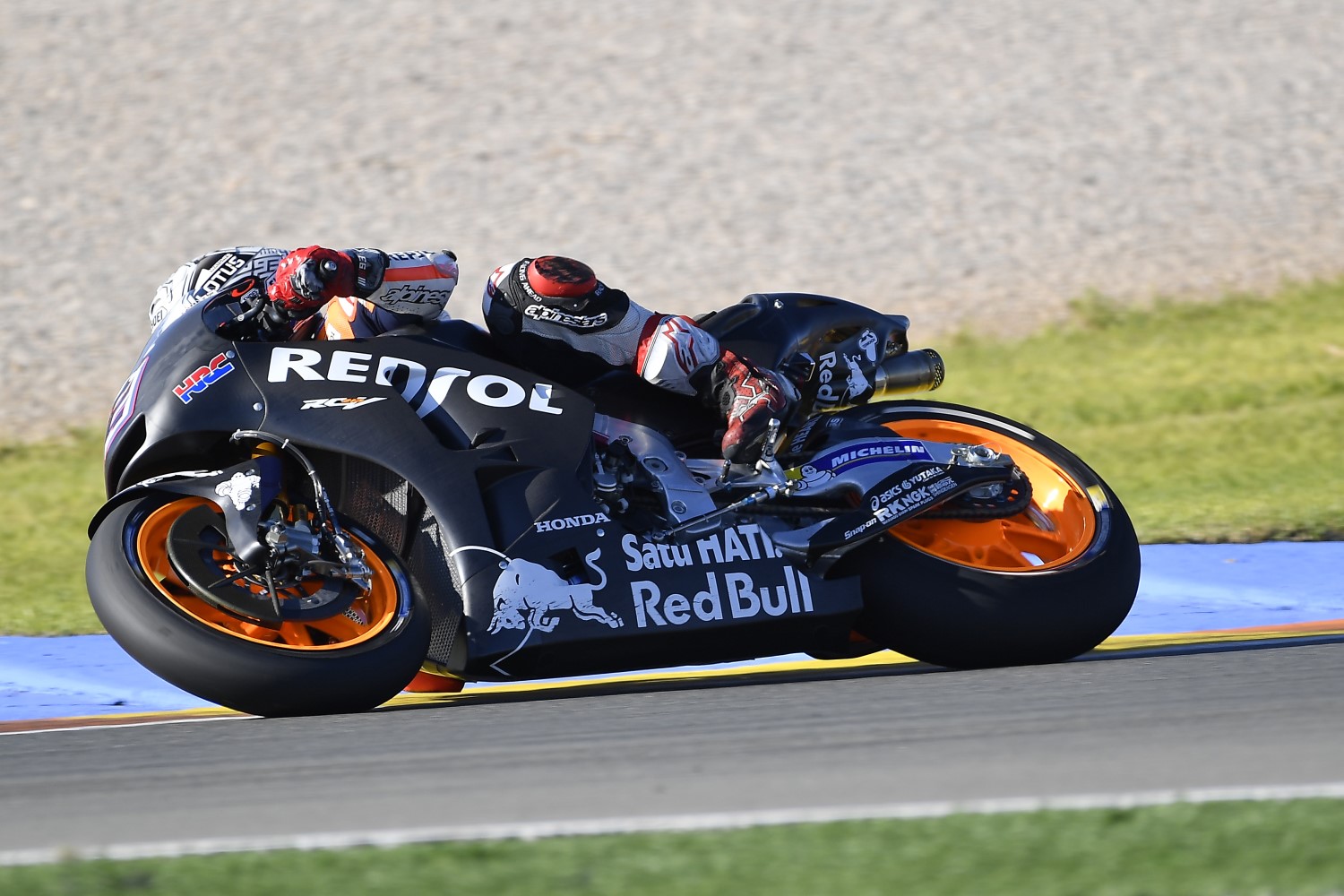 Maverick Vinales (Movistar Yamaha MotoGP) is settling into his new home well — fastest on day one at the Valencia test and then repeating the feat on day two for an amazing debut. A 1:29.975 in the afternoon saw the former Moto3™ World Champion take over at the top, after completing 66 laps on his second day at Yamaha. With blue skies once again and good, seasonal temperatures, conditions were nigh on perfect for one of the paddock's key days of the pre-season.

Vinales' teammate Valentino Rossi ended the day a little further down the timesheets in P7, completing a program of 45 laps and suffering no crashes — after losing some track time on day one following a fall on when testing back to back 2016 and 2017 equipment. The 9-time World Champion put in a best of 1:30.709, and next up heads to Malaysia alongside Vinales to test in Sepang — with most on the grid instead heading for Jerez next week.

Repsol Honda Team were testing a multitude of different engine and frame combinations and evolutions from 2016 and 2017, with reigning Champion Marc Marquez suffering a fall between Turns 1 and 2 after running on and then heading into the gravel slowly; just unable to keep the Repsol Honda upright. Marquez did a total of 58 laps with a best of 1:30.171 and went second — doing some longer runs later in the afternoon, and taking advantage of the final minutes of track time for a practice start.

Dani Pedrosa was out the box a little later than his teammate Marquez, as he continues to recover from a broken collarbone — amongst other injuries — sustained at the Twin Ring Motegi, and the ‘Baby Samurai' accordingly put in a lesser 38 laps on day two, including a good amount of time on the black liveried 2017 bike. Pedrosa ended the day around half a second off his teammate, in P5 with a 1:30.686.

Jorge Lorenzo was first out once again from his new Ducati Team pit box, eager to get down to work. It was another positive day for the Mallorcan in his new home, eighth fastest and only 0.035 behind former teammate Valentino Rossi on the Movistar Yamaha. The Spaniard's best was a 1:30.744 after riding the 2017 bike for much longer than his first initial run on Tuesday, and Lorenzo ended the day with a practice start; one of the last on track as the sun began to set. 41 laps and many runs gathering maximum information was vital for the number 99, as he will not be allowed to take part in the Jerez test next week.

Andrea Dovizioso was the fastest of the Ducati Team on track on day two. Putting in 33 laps throughout the hours, the Italian was P3 on the timesheets with a 1:30.443, 0.468 off Vinales' best of the day. The Sepang winner tested both the 2016 and 2017 machines once again on day two, and will also sit out the Jerez test as the Ducati test team take over from him and Lorenzo.

Team Suzuki Ecstar riders Andrea Iannone and Alex Rins had a mixed second day. Both riders suffered crashes at Turn 12; the latter from Iannone, on only his fourth lap, bringing out the red flag to assess the track safety conditions. With extra protection added to the run off area at the corner, action got underway once again with Iannone then improving in the afternoon to go P4, a 1:30.599 after a brave 47 laps and one of the only men getting faster later in the session.

Alex Rins' crash in the morning saw the MotoGP™ rookie fall only a few minutes before his teammate — with severe damage to the bike. Rins was taken to the Medical Center at the track before then going to hospital for further investigation — with initial reports of a compression fracture to vertebrae in his upper back, and at least a month of rest required for the Moto2™ and Moto3™ race winner. The Spaniard will sit out further testing later in November at the Circuito de Jerez.

Cal Crutchlow (LCR Honda) was fastest Independent Team rider, fitting with the title he secured in 2016, and put in a best of 1:30.709 after completing 45 laps. The LCR rider avoided the crash he suffered on day one, getting in a good program of work.

Aprilia Racing Team Gresini rider Aleix Espargaro impressed on his second day out with his new team, taking ninth on the timesheets with a 1:30.885 on his fastest lap of 45. Teammate Sam Lowes sat out day two after a late crash on day one, instead ready to get back on track in Jerez next week.

New Monster Yamaha Tech 3 teammates Jonas Folger and Johann Zarco had an impressive day two. Folger just got the better of his two-time Moto2™ World Champion teammate after dueling it out for supremacy; 0.067 ahead of the Frenchman on the timesheets. The pair put in 62 and 55 laps respectively, and will be joining Movistar Yamaha at Sepang for another test in place of the Jerez choice of many of the other teams in the paddock.

Team Estrella Galicia 0,0 Marc VDS had a chassis update — the one used by race winner Cal Crutchlow (LCR Honda) from Silverstone onwards. Finding improvements, Jack Miller's fastest was a 1:31.069 to put him in P12 on the timesheets despite a crash in the afternoon, with Tito Rabat registering a 1:31.918 in P18. Miller completed 40 laps; Rabat an uncharacteristic 36.

Alvaro Bautista (Pull&Bear Aspar Team) was P14 on day two with a 1:31.186 over 69 laps — the most of the day – but did suffer a crash earlier in the session. Teammate Karel Abraham, riding the 2015 Ducati after beginning on the 14.2 yesterday, had his day cut short with a major electrical problem that the team were unable to fix on the day — left wanting some more track time on his return from WorldSBK.

Octo Pramac Yakhnich rider Scott Redding put in 42 laps with a best of 1:31.118 to go P13 despite a crash, with temporary teammate Michele Pirro, standing in for Danilo Petrucci, in P16. Avintia Racing's Hector Barbera completed the top fifteen after 39 laps, with a best of 1:31.244 — with teammate Loris Baz doing a best of 1:32.161 after 36 laps.

Red Bull KTM Factory racing's Pol Espargaro and Bradley Smith completed 33 and 34 laps respectively as they ventured out on track for the second time with the new project from the Austrian factory. Espargaro put in a fastest of 1:31.833, 1.8s off Vinales, and ended the day in P17 in a good first representative, comparative test for the RC16. Smith suffered a crash later in the day; rider ok, ending the day in P20 as he continues to get back to full strength.

Next, Spain or Sepang await the grid for more testing, before the winter test ban comes into effect. Then, the whole paddock will head for Malaysia for the first test of the new season — beginning on 31st January at Sepang International Circuit.