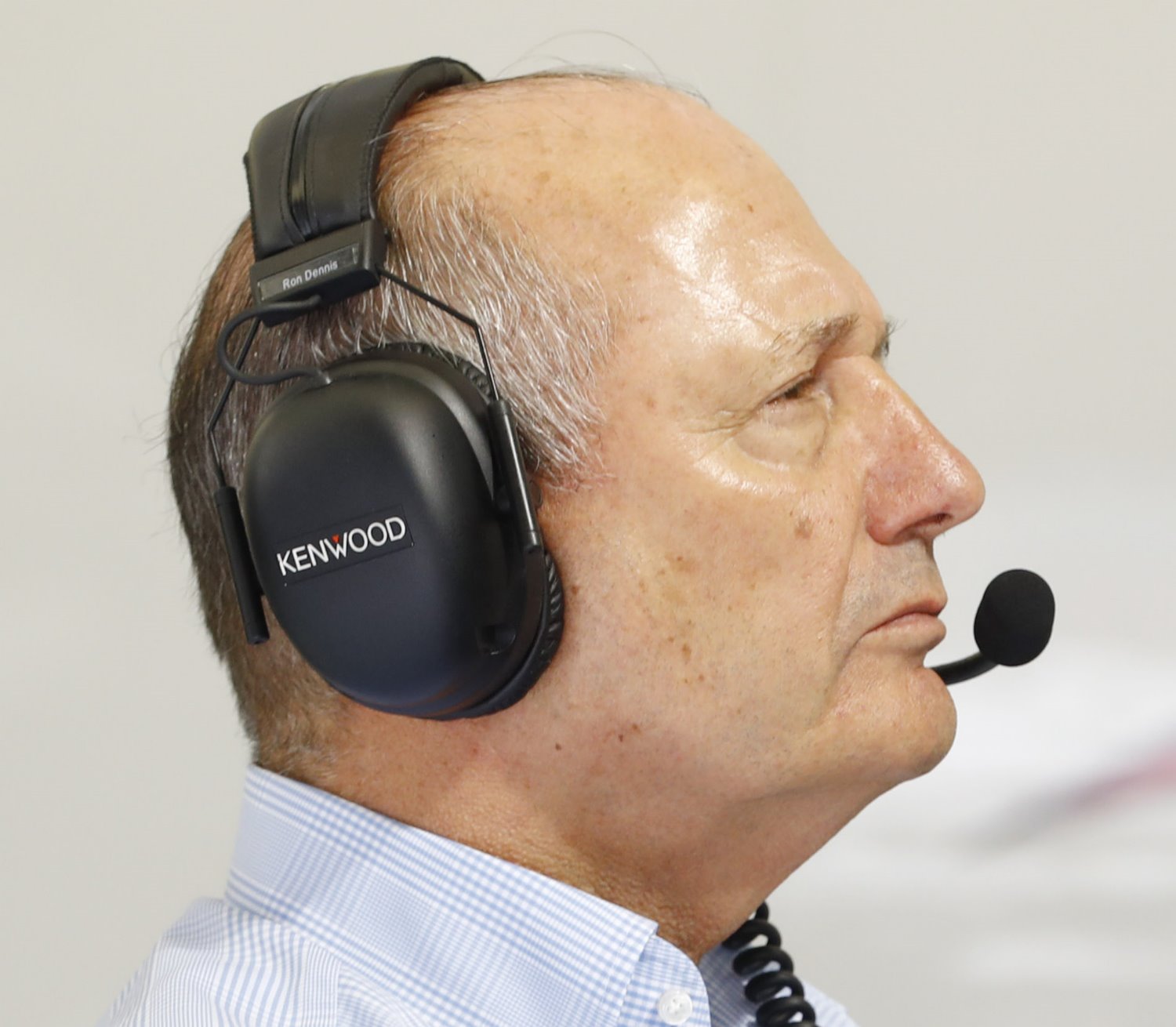 Rumors became fact on Tuesday as the 69-year-old confirmed that he has been axed from the company he built up over the past 35 years.

In a statement, he said the decision to "force through" the change by fellow co-owners Mansour Ojjeh (TAG) and Bahrain left him "disappointed".

The Times quoted F1 supremo Bernie Ecclestone as saying the decision to axe Dennis is "stupid".

Dennis agrees that his axing comes "despite the strong warnings from the rest of the management team about the potential consequences of their actions on the business".

"The grounds they have stated are entirely spurious; my management style is the same as it has always been", added Dennis, referring to McLaren's 20 F1 titles and billion dollar business.

The Briton clarified that he is now on "gardening leave", and said he would retain his 25 per cent McLaren share and seat on the board.

"In addition I intend to launch a new technology investment fund once my contractual commitments with McLaren expire," added Dennis.

In a separate statement, McLaren said Dennis is one of F1's "true greats" whose contribution to the team was "colossal".

On Tuesday, the famous British team and the 69-year-old confirmed that long-time chief Ron Dennis has been ousted.

"McLaren Technology Group is now in the process of seeking a new chief executive officer," McLaren declared in a statement.

Britain's The Times newspaper reports that the frontrunner is Zak Brown, who recently left his role in charge of several lucrative sponsorships in F1.

But correspondent Kevin Eason said a "tug of war" is taking place for Brown's services between McLaren and F1's new owners Liberty Media.

The report said American Brown has "48 hours to decide" if he wants to succeed Dennis as McLaren's chief.

It is believed Brown is also a favorite to succeed Bernie Ecclestone as F1's chief executive.

"Brown is faced with a choice of running one of the biggest names in formula one — or the entire show," said Eason.

Until the decision to replace Dennis is made, McLaren said it will be run by committee.

Manor held the lucrative position courtesy of Pascal Wehrlein's 10th-place finish in Austria, before both teams threatened the top 10 during a rain-hit race at Interlagos.

All three regressed when the race resumed, but while Nasr held on to a points finish in ninth, Ocon slipped down the order to ultimately take 12th, with Wehrlein in 15th.

"We were pretty apprehensive in Austin and Mexico, with Sauber hovering on the cusp of a point in both races, but we knew coming into this race that Interlagos carried a much greater risk," said Ryan.

"With conditions like we've seen, it was always going to come down to luck.

"At one point things had fallen in our favor and we were looking at our first double points finish. Nasr was still ahead on track, but we could have achieved more points if things had continued like that.

"But the race was evolving with every lap, every Safety Car and both red flags, and in the end, things went Sauber's way, not ours."

Ryan was nonetheless pleased with the efforts of both Ocon, competing in his first wet Formula 1 race, and Wehrlein.

"Esteban put up a great fight to try to pull things back and actually both of our drivers did an incredible job in conditions that really tested even seasoned world champions," he said.

"We're down, but not defeated.

"The whole team is disappointed to say the least, but there is one race remaining and we have to keep pushing all the way to the checkered flag in Abu Dhabi."

Liberty Media Asking Teams To Help Fund $4.4B Takeover Of F1
Liberty Media CEO Greg Maffei said that Formula 1's teams are "on track to contribute a chunk" of the $4.4B which Liberty Media is using to buy the auto racing series, according to Christian Sylt for FORBES.

When it was announced in September that Liberty plans to buy control of F1 from private equity firm CVC, "it came to light that the teams had been offered the opportunity to buy shares in the business." Three shares have been designated as team shares and new F1 Chair Chase Carey said that “some of the teams have expressed an interest in investing."

Speaking at a Liberty investor meeting, Maffei said, "We obviously also want to meet with the teams and I think as has been mentioned we have expectations that they will become owners in Formula 1 primarily through the placement of some of the shares to the CVC Group to them." Maffei is "referring to shares in Liberty which are being offered to CVC as payment instead of cash."

Cash comprises just 25% of the $4.4B purchase price for F1, "with shares in Liberty making up the remainder" along with a payout of $351M in loans which will convert into non-voting Liberty shares in 30 months. Even though the terms of the takeover have been signed, CVC is "still looking for more cash."
Liberty has agreed to "try to sell to external investors some of the shares it has offered CVC which would receive the cash from them instead." As Maffei revealed, some of these investors are "none other than the teams and it is incredibly ironic for a number of reasons."

Some in the sport see Liberty as "somewhat of a savior which will boost F1’s profile but looking at its financials raises questions as to whether this is possible." Liberty's F1 investment presentation states that following the takeover Liberty would have $104M of cash compared to the $627M that "F1 itself has in the bank."

That is "just the start." Not only is Liberty "selling its shares to the teams in order to pay CVC," its reserves "will not even cover" the $1.1B cash payment. Instead, it is being "partly funded with loans secured on Liberty’s other assets such as its shares in companies like event promoter Live Nation, Time Warner and Viacom." FORBES http://www.forbes.com/sites/csylt/2016/11/11/liberty-media-asks-teams-to-help-fund-its-4-4-billion-f1-takeover/2/#6a72bf7e83cf

Alonso occupied seventh prior to the final restart at Interlagos but spun up the hill exiting Juncao as the pack prepared to get underway and dropped down to 17th position.

Alonso charged through the field to pass Esteban Ocon for 10th on the penultimate lap, gaining a point, though Jenson Button came home 16th and last, 21 seconds behind nearest rival Pascal Wehrlein.

"For McLaren-Honda, this was largely a race to forget," he commented.

"For Formula 1 as a sport, it's a race from which we can learn in order to improve the show for future wet-weather races.

"Unfortunately for us, neither driver was truly able to seize the moment – Fernando drove bravely to run inside the top 10 for much of the race, then a spin dropped him to the back of the field.

"His comeback drive to 10th – passing seven cars in 15 laps – was brilliant, and displayed all his speed, bravery and commitment.

"Jenson was unable to rid himself of the handling imbalance he encountered [during qualifying], and struggled to find any rear grip in the tricky conditions. We will go away and examine what went wrong for him."

Formula 1 tire supplier Pirelli has nominated the new-for-2016 Ultra Soft, Super Soft and Soft compounds to cope with the demands of the Yas Marina Circuit.

Rosberg and Hamilton will both have seven sets of Ultra Softs, two sets of Super Softs and four sets of Soft tires available as they prepare to battle for crown.

Drivers have once again favored the softest nominated compound, with Force India's Nico HÃ¼lkenberg the most aggressive, selecting eight sets of Ultra Softs.

It will mark the fifth time that the Ultra Soft tire has been used this season, after it was taken to Monaco, Canadian, Austrian and Singapore Grands Prix. 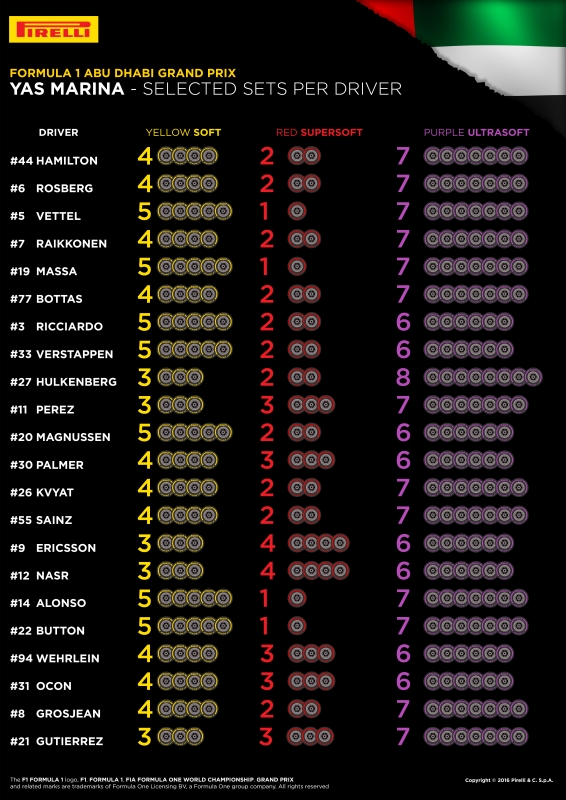 Kvyat: Toro Rosso can 'surprise' in 2017
Toro Rosso driver Daniil Kvyat reckons that the Italian outfit will be able to "surprise" its rivals on a number of occasions in Formula 1 next season.

Kvyat returned to Toro Rosso prior to the Spanish Grand Prix but has scored only four points, amid his transitional period from Red Bull and the team's regression due to using a 2015 Ferrari power unit.

However, Toro Rosso will return to using current-year power units next season by realigning itself with Renault, a step which has encouraged Kvyat.

"It should definitely be better, because running last year's engine without any updates throughout the season never helps," he is quoted by the official F1 website.

"From what we have seen from Red Bull, the Renault engine has made some significant steps forward. So, the hope is high that this will also go for next year.

"Toro Rosso has a great group of people, so I am sure that we will be able to surprise on a couple of occasions."

Kvyat added that confirmation of his 2017 plans, with Toro Rosso having announced his extension at the United States Grand Prix, has made matters "easier".

"You get into the car much easier without counting down the races and thinking that it might be your last one!" he went on to comment.

"I am very happy to remain a part of the Red Bull family.

"I am working with my engineers already massively on 2017 to build an even stronger platform to the one we have already."