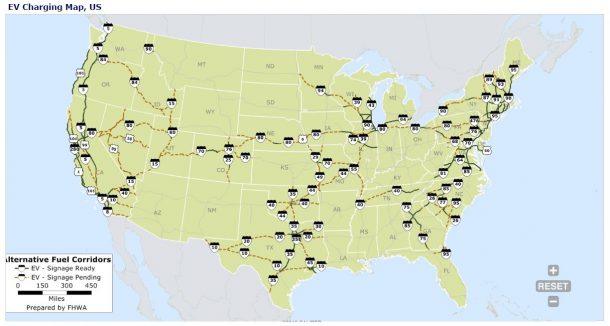 The government and other companies are rolling out charging stations while the big oil companies remain asleep at the wheel and still in denial.

The corridors were required to be established by December under a 2015 highway law.

California will buy at least 150 zero-emission vehicles and provide EV charging at a minimum of 5 percent of state-owned parking spaces by 2020.

The city of Atlanta will add 300 charging stations at Hartsfield-Jackson International Airport by the end of 2017.

Los Angeles agreed to nearly triple the city's current plug-in electric fleet to 555 vehicles from about 200 by the end of 2017. Of those, 200 will be for the police department. The city is also adding another 500 stations by 2017.

One hurdle to the mass adoption of EVs has been the difficulty in finding places to recharge vehicles. In July, the White House said it was expanding a federal loan guarantee program to include companies building EV charging stations.

The U.S. Energy Department said in July that charging facilities are now an eligible technology for the program that can provide up to $4.5 billion in loan guarantees.

No loans have been made to EV charging projects yet, officials said.

U.S. Energy Secretary Ernest Moniz told Reuters in January that the country may hit the figure in three to four years with continuing improvements in battery technology, but he acknowledged low gasoline prices have hurt EV sales.

The White House has repeatedly tried to boost EV sales, including hiking the EV tax credit and converting it to a point-of-sale rebate, but the proposals have yet to pass Congress. David Shepardson/Reuters