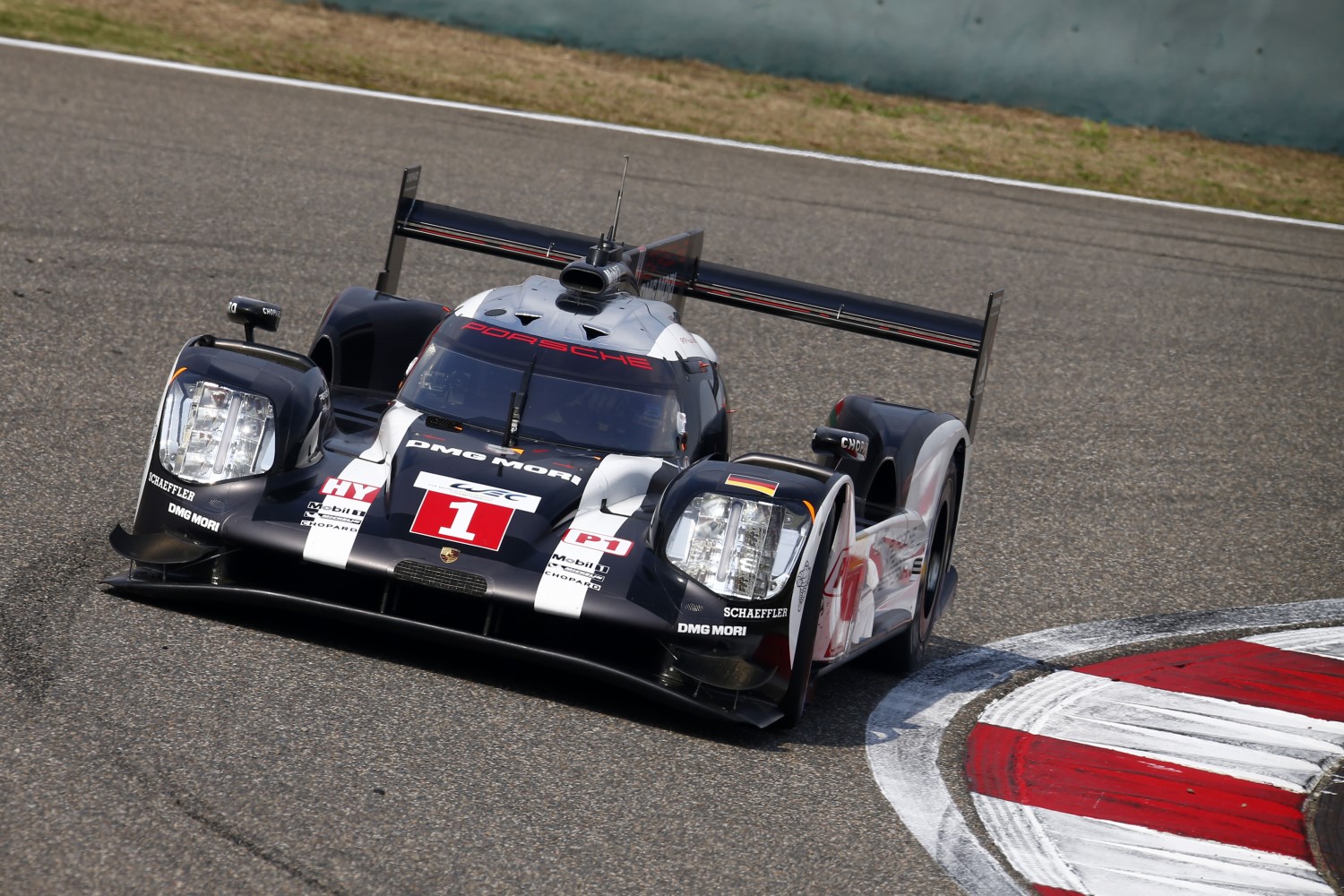 The No.1 Porsche 919 Hybrid led the way in the first 90-minute Free Practice session in round 8 of the World Endurance championship at Shanghai as Brendon Hartley claimed best lap in both FP1 and FP2

The No.8 Audi R18 was second with Lucas Di Grassi at the wheel.

Toyota Gazoo Racing was third and fourth as No.5 beat the No.6 TS 050 HYBRID.

There was a gearbox problem for the No.7 Audi R18 that confined Lotterer, Fassler and Treluyer car to just 14 laps in FP1

The points leading No.2 Porsche 919 Hybrid also suffered technical problems and misses most of session

Fuji victors G-Drive Racing topped the LMP2 class as Will Stevens set a fast lap to head No.36 Signatech Alpine

The Porsche Team with the two 919 Hybrids in general had a positive first day of practice for the eighth out of nine rounds of the FIA World Endurance Championship (WEC) in Shanghai. The reigning World Champions, Timo Bernhard (DE), Brendon Hartley (NZ) and Mark Webber (AU), were fastest in both of the two 90-minute free practice sessions on the 5.451 kilometer long Chinese Formula One circuit. Hartley set the fastest lap of the day in the afternoon with a time of 1:44.594 minutes. The championship leaders, Romain Dumas (FR), Neel Jani (CH) and Marc Lieb (DE), in the sister car nearly completely missed the morning session because of a precautionary battery change. They came third in the afternoon session with Marc Lieb setting their fastest lap time (1:46.264 minutes). The six drivers with the two Le Mans Prototypes completed a total of 122 laps in constantly dry and mild conditions.

The Weissach based LMP1 team is hoping for an early win for its second consecutive world championship title in Shanghai. To secure the manufacturers' trophy Porsche, which currently has a 59-point advantage, needs this to be at least 44 points at the end of the weekend.

Team Principal Andreas Seidl said: "It was a solid first day for us. We were testing various set-up options and made some steps in the right direction. Our lap times were competitive on single fast laps as well as on long runs. Unfortunately, we lost an hour of running time with car number 2 in the first session. Because not all parameters of the high voltage battery were as expected, we did a precautionary battery change. This loss of track time is certainly a disadvantage for these three guys and they are not happy with the car's set-up yet. Now we have to draw the right conclusions from today's results and prepare both cars for tomorrow in the best possible way."

Drivers Porsche 919 Hybrid number 1
Timo Bernhard (35, Germany): "In the second session we had a small problem that cost us some 15 minutes, but afterwards we managed to get the most out of the session and did a lot of set-up work for the race. We got a better understanding for the tires and got several parameters right in their operational window. The track has improved, but is still very dirty. Again the tires tend to pick up lots of dirt, which may lead to a complex race. We have tried several things and now we have to put together all the various parts of the puzzle. I think this has always been a strength of ours."

Brendon Hartley (26, New Zealand): "In the morning we did longer runs and our lap times looked quite promising. In the second session Mark and I did a qualifying simulation, which was also good. Afterwards Timo continued with the race preparations."

Mark Webber (40, Australia): "We have had a smooth day. The lap time from our qualifying simulation obviously looks nice. One minute 44 seconds is a really quick lap time here in Shanghai."

Drivers Porsche 919 Hybrid number 2
Romain Dumas (38, France): "The car's set-up is not the optimum yet, but it is okay to drive. To improve traction we can do some more work on the set-up. There's quite some traffic out there, and lap times always depend on where on the lap you get the traffic. Overall I'm quite confident."

Neel Jani (32, Switzerland): "We have had a bit of a difficult start to the weekend, because we almost didn't drive in the first free practice session. That meant we had to do some sort of emergency program in terms of race preparation in the second session. We want to improve a few things on the car."

Marc Lieb (36, Ludwigsburg): "Even in the second session I found there was still relatively low grip on the track. The tires show an extreme performance peak here. In other words, new ones turn quite quickly into old ones. Because of the time we lost in the morning we are behind with our program, but, other than that, after the battery change everything was fine."