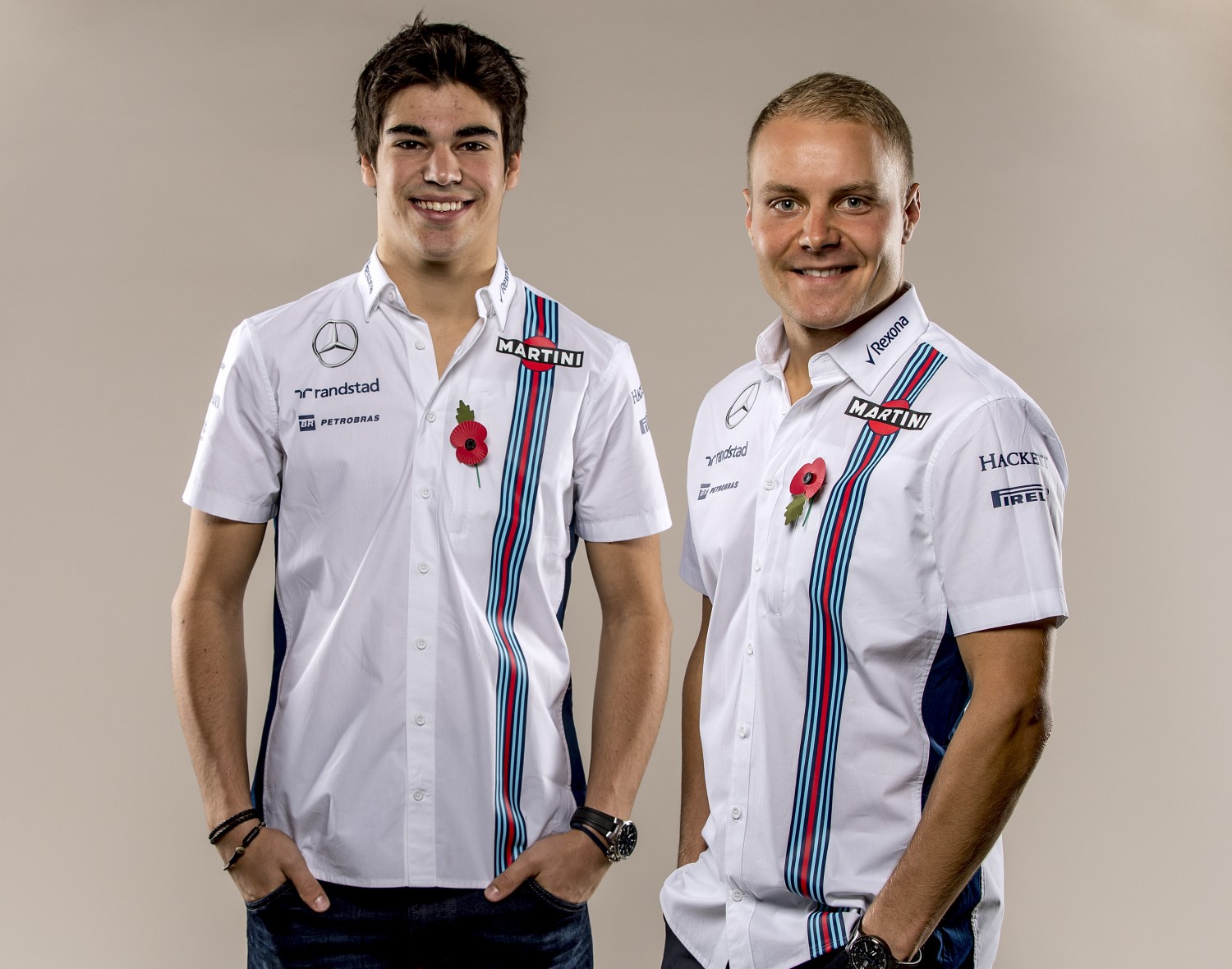 WILLIAMS MARTINI RACING is pleased to confirm Valtteri Bottas will race with the team for a fifth consecutive season, with Lance Stroll making his Formula One debut alongside him for the 2017 FIA Formula One World Championship.

Valtteri has proved a great talent with four years’ Formula One racing experience under his belt and nine podiums to his name since the start of 2013. Valtteri remains a valuable asset to the team and will help lead the team through the big regulations changes that will be introduced in 2017.

Since beginning his karting career in 2008, aged eight, Lance Stroll has gone on to secure the 2014 Italian Formula 4 Championship title and 2015 Toyota Racing Series title in New Zealand, with numerous wins to his name. Lance has progressed through the Williams Young Driver Programme alongside clinching the 2016 European Formula 3 title in dominant style with 14 race wins and 17 front-row starts, 14 from pole position. At the age of just 18, he has already proved he is a talent to watch in the future.

Speaking about the announcement Valtteri Bottas said; “Firstly, I am very happy that I will be starting my fifth season racing for Williams in 2017. It’s going to be an exciting year with all the regulation changes and a great opportunity for the team to get closer to the front. I’ll be giving 100% as always to the team. Thank you to Frank, Claire and the whole Williams Board for their continued trust in me. Also, thank you to everyone at Williams, as it will be nice to continue working together with everyone both at the factory and the track.

“I’d also like to extend a very warm welcome from myself to Lance on joining the team. I look forward to seeing what we can achieve together.

“Williams is like my family. Going into next season, it will be eight years in total since I joined at the start of 2010, so it really does feel like home here. However, I still believe we haven’t yet achieved what we should, and can do together."

Lance Stroll added; “To be racing in Formula One in 2017 is incredible, I can’t thank Williams enough for showing faith in my ability. Racing in F1 was something I dreamt about as a young kid. When I began karting seriously, F1 was then the ultimate goal and especially when I started racing cars in 2014.

“2017 is going to be a big learning curve for me, but I’m eager to absorb everything Williams can share with me so that I improve. I’ll be taking things on a race-by-race, lap-by-lap basis and hopefully progress with experience like I did when I entered Formula 4 and then Formula 3.

“I believe contesting the FIA European Formula 3 Championship for the past two years has prepared me well for the step up. There are many elements for me to learn and I’m still young. I’ve been experiencing a 2014-spec Williams FW36 since August, which has gone very well. The power is incredible. I’m learning about the car, the incredible downforce, DRS and tyre management, finding a rhythm and finding the limit. I’m becoming more comfortable and confident with each run.

“I’ve enjoyed success in karting, F4, Toyota Racing Series and most recently F3 – winning every category I’ve competed in – so I believe I have earned a shot in F1. I’m very thankful to everyone who has helped me to reach this level."

Claire Williams, Deputy Team Principal, said; “I’m delighted to confirm that Valtteri will be racing for Williams once again next year, and be joined by Lance Stroll. Valtteri is a much-loved member of the team and his talent is unquestionable, so for him to use that experience to help lead the team forward is exciting. He has played a pivotal role in the team’s turnaround since 2014 and we are looking forward to continuing the strong relationship we have with him into the future.

“Lance joined the Williams Young Driver Programme at the end of 2015 and has impressed our engineers with his maturity, talent and enthusiasm. We are pleased to be able to offer him the opportunity to step up and show what he can do in Formula One, after proving a dominant force in all the categories he has raced in so far. He is still young, and we looking forward to seeing him develop as a driver. Williams has a great record of introducing young drivers to Formula One, who have achieved great results, and we hope this will be the start of a long successful career for Lance as well.

“As a team, we continue to push forward in our goal to win races and championships, and believe this exciting fresh combination will put us in a strong position to deliver on our future targets."