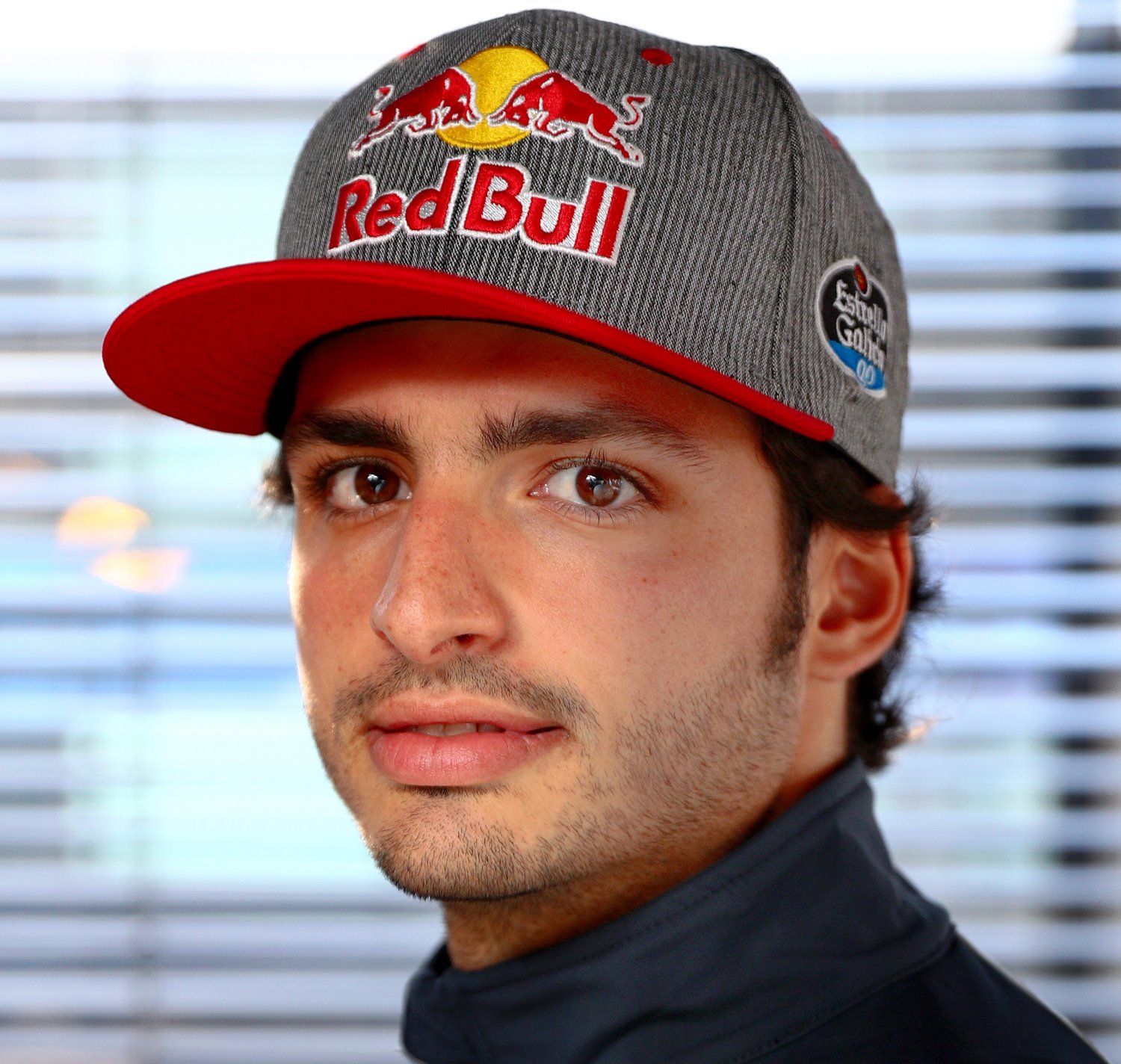 Renault admits it wanted Sainz Jr, not Hulkenberg for 2017

(GMM) Renault has admitted for the first time that it tried and failed to secure Carlos Sainz Jr. for 2017 and beyond.

It is an open paddock secret that the French works team made a move for the Spaniard, apparently even offering to ease the price of its engine deals with Red Bull if the energy drink team released him from Toro Rosso.

That information is now finally being confirmed by Renault, who have instead signed Nico Hulkenberg for 2017 and are currently weighing up which driver to pair him with next year.

"We made every effort for Sainz," a Renault spokesman told the Spanish newspaper AS.

"We wanted him, we wanted a driver to lead our project and it would have been good to have him with us," the spokesman added.

The Renault official confirmed: "Red Bull did not want to let him go."

For his part, 22-year-old Sainz says he is happy to stay at Toro Rosso for 2017 but is eyeing a move elsewhere for 2018, particularly as the doors to Red Bull Racing appear closed for now.

Indeed, although officials were seen chatting with Sebastian Vettel recently, team boss Christian Horner said there is no room for the Ferrari driver for now.

"We are confident in our drivers for the next two years so there's no room for Seb," he said.

The quadruple world champion even called Max Verstappen a "c—" on the radio and lost his podium finish for breaking the new 'Verstappen rule' in his dice with Daniel Ricciardo.

It has led to speculation Vettel could sit out Brazil next weekend for bringing the sport into disrepute, as it emerges the FIA is in fact looking into the matter.

Straight after the race, the German driver remained bullish.

"I do not understand why you try to push me into a corner by asking this question," he was quoted as saying when asked if he has brought the sport into disrepute.

Told that his behavior was a bad example for children, Vettel insisted: "Do you think I think about kids when I race? No, I drive my race.

When asked what he said to Whiting when he met with the British official in Mexico, Vettel told the reporter: "This does not concern you."

Ferrari team boss Maurizio Arrivabene was slightly more willing to answer, having told Vettel to "calm down" during the radio rant.

"We talked together, me and Sebastian, and that's it," said the Italian. "I don't have to tell in public what I am doing with the drivers.

"He excused himself (to Whiting) and I'm sure it is not going to happen again."

Still, the criticism of Vettel has been intense.

"I understand perfectly when you have that adrenaline and you're in the heat of the moment," said former Red Bull driver Robert Doornbos.

"But you cannot insult and cuss Charlie Whiting and Max like that. That doesn't fit with the sport," the Dutchman told Ziggo Sport Totaal broadcaster.

Also critical of Vettel was his former boss, Dr Helmut Marko, but Arrivabene suggested the Austrian should focus on his current drivers.

"Everyone should look a little more on themselves," said the Italian.

"I do not like this pointing the fingers at others," Arrivabene insisted. "I don't need lessons, not from Helmut Marko or anyone else."

Arrivabene hits out at 'harsh' Vettel penalty
Ferrari Team Principal Maurizio Arrivabene says the outfit's podium at the Mexican Grand Prix was "taken away by bureaucracy", after stewards elected to penalize Sebastian Vettel, dropping him from third to fifth.

Vettel had moved up from seventh to fourth, having run a long first stint on Softs before switching to Mediums, and closed in on Max Verstappen during the closing stages.

Ricciardo used superior traction exiting Turn 3 on the penultimate lap to challenge Vettel on the approach to Turn 4, with the German edging his rival towards the inside, before contact.

Vettel stayed ahead and came across the line in fourth, before being prompted to third when Verstappen was handed a five-second time penalty prior to the podium ceremony.

However, Vettel was later given a 10-second time drop for "potentially dangerous" driving, which dropped him to fifth, behind Ricciardo (now third) and Verstappen (now fourth).

"It could have felt special: we fully deserved this podium, which was taken away by bureaucracy," said Arrivabene.

"The whole team had showed great stamina by staying united and focused in a difficult moment.

"Our strategy had made it possible to make good progress and both drivers did a very good job.

"Unfortunately, we were penalized by Stewards' unappealable decision which, in my opinion, is too harsh and somehow unfair."

Ferrari now trails second-placed Red Bull by 62 points in the Constructors' Championship, with only two rounds remaining this season.

Verstappen will not spoil title battle – manager
(GMM) Max Verstappen's manager has denied the controversial young Dutchman will interfere with the outcome of the world championship.

The 19-year-old incurred the wrath not only of Ferrari's Sebastian Vettel, but also Mercedes chiefs Toto Wolff and Niki Lauda, after clashing wheels with Nico Rosberg in Mexico.

"His head has grown too much and he drives now with an incredible arrogance," the Mercedes team chairman said.

German newspapers including Bild are worrying that Verstappen will continue to fight so hard in Brazil and Abu Dhabi that he might crash into Rosberg or Lewis Hamilton and affect the outcome of their title battle.

Red Bull team boss Christian Horner admitted: "Max does not see Nico fighting for the title, he sees an opportunity to attack. That is why he is such a great driver."

But former driver Christian Danner, now a commentator for German television RTL, agrees with Lauda that Verstappen's attitude is unacceptable.

"What he did in Mexico in the first corner is a lack of respect for a colleague, even more so for the championship leader," he said.

The international press is also not impressed, with Italy's Corriere della Sera declaring: "Verstappen combines the talent of a champion with the audacity of a teenager.

"It is good for an otherwise boring formula one, but he should also respect some basic rules."

And even a great admirer of a spectacular 'racer' like Verstappen, the F1 ringmaster Bernie Ecclestone, said that in Mexico, "Max should have lifted".

Speaking to Bild, Verstappen's manager Raymond Vermeulen moved to play down all of the hype.

"He was punished because he cut the corner, but Rosberg and Hamilton were not. That's a double standard," Vermeulen insisted.

"We fight for every position, but we do not interfere in the world championship."

Kvyat: No consistency with F1 penalties
Toro Rosso driver Daniil Kvyat criticized the inconsistent nature of stewarding decisions after he was penalized for passing Romain Grosjean off-track during the Mexican Grand Prix.

Kvyat and Grosjean battled over 18th position, with the Toro Rosso driver electing to go around the outside at Turn 12, using the run-off on the exit of the corner to seal the position.

Stewards handed Kvyat a five-second penalty for the transgression, which cost the Russian a position at the checkered flag, dropping from 17th to 18th, behind Kevin Magnussen.

"I'd say that our pace was just too slow to fight for higher positions, unfortunately," he said.

"Regarding the five-second penalty I was given, I have to say that there's just no consistency with these penalties… I disagree with mine, even though I will review the race and maybe change my opinion."

Kvyat's team-mate, Carlos Sainz Jr., was also handed a five-second time penalty, after he was deemed to have pushed McLaren's Fernando Alonso onto the grass on the opening lap.

"During the laps to the grid I already felt that there was something wrong with the gearbox while downshifting, as well as with the brakes that kept overheating from the first lap onwards," he said.

"We didn't have the pace today and these issues didn't help."

Hamilton, who started on pole, snatched his front-right under braking for Turn 1 and was left with a significant flat-spot, which he had to manage over the opening stint.

Hamilton regained his composure before pitting slightly early for his one-and-only stop on 17/71, but Wolff has admitted that the situation was initially difficult to manage.

"Maybe that race looked straightforward from the outside but it really wasn't from within the team," commented Wolff, as he reflected on the Grand Prix.

"It all began at Turn 1 when Lewis flat spotted his front right tire under braking.

"That gave us a really tough call to make because we could see the vibrations getting worse and some of the peaks he was hitting were pretty scary.

"In any normal race we would have pitted him because of the risk of tire failure or maybe worse but of course that stop would have cost him the championship.

"We had a lot of debate with the engineers, balancing the positive and negative aspects of the decision, and we were monitoring the numbers every single lap.

"But in the end, some of Lewis' bad luck this year got cancelled out by making it through this situation and we pulled him into the pits as early as we could to make the one-stop strategy work.

"From there, he was able to control his pace, in spite of some high exhaust temperatures that meant we were juggling with engine modes to look after everything properly."

Wehrlein frustrated by Gutierrez approach
Manor's Pascal Wehrlein vented his frustration at the aggressive approach adopted by his rivals after he was knocked out of the Mexican Grand Prix on the opening lap.

Wehrlein qualified in 16th place and was in the thick of the action through the opening sequence of corners, when he was tagged by Esteban Gutierrez, which sent him into Marcus Ericsson.

The contact with the Sauber caused terminal damage to Wehrlein's front left suspension as he became the first, and only, retirement of the race.

"I was in front and when I turned in, Gutierrez hit me from behind, that's it," he said.

"My suspension was broken and my race was over. I was on the outside, leaving a lot of space and that is a left and right chicane.

"I don't understand why you would risk so much there when it's such a long race."

Wehrlein admitted that the early exit was "difficult to take" off the back of an encouraging qualifying performance.

"I couldn't believe it, it was heart-breaking," he commented.

"We had a chance at a really strong race and for that opportunity to be ripped away before we'd even begun was difficult to take.