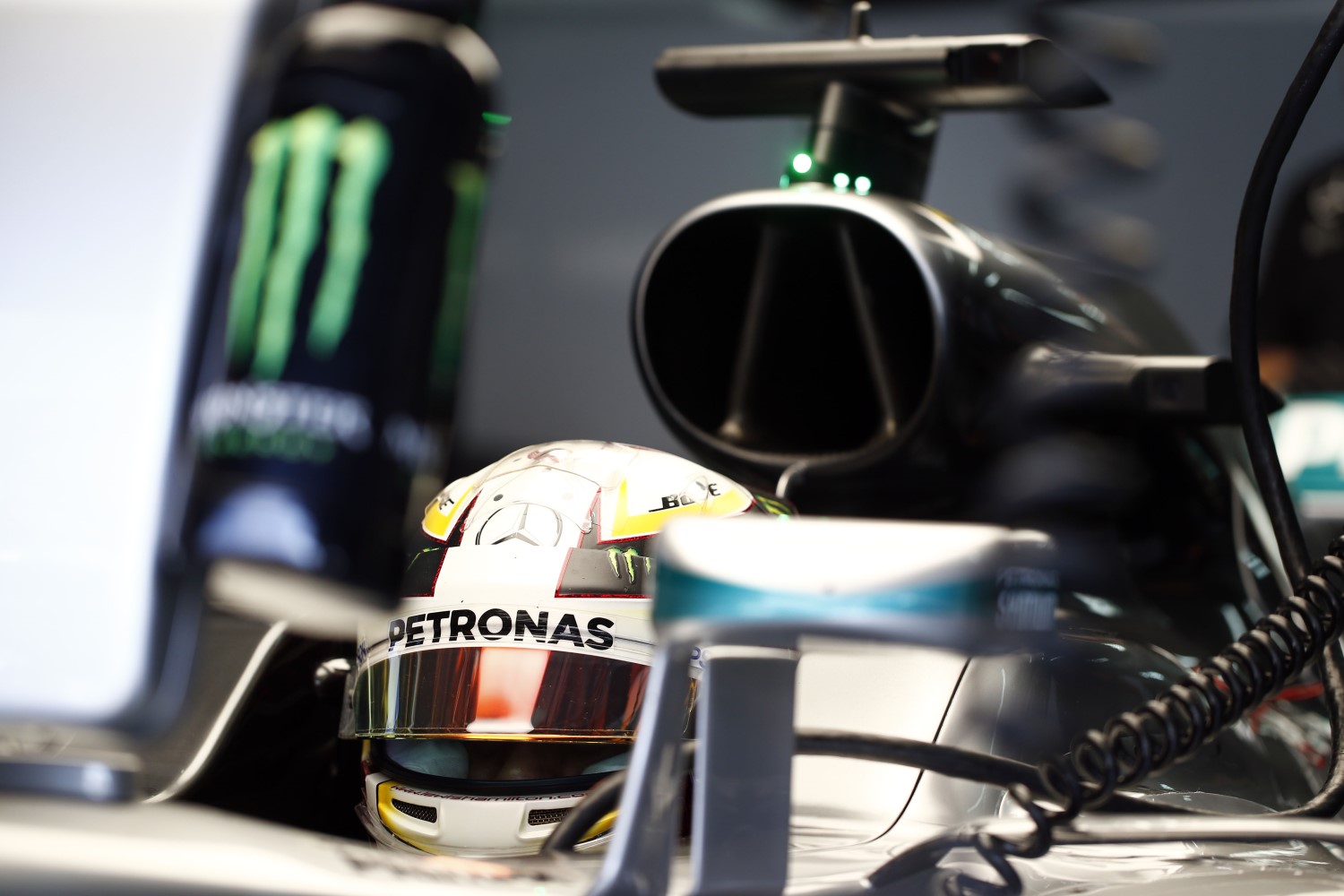 The reigning world champion turned a lap of 1m34.944s on soft Pirelli tires to top Rosberg by 0.233s in the Aldo Costa designed wondermobile with Sebastian Vettel four tenths further back for Ferrari.

Kimi Raikkonen set the fourth quickest time on his second attempt on the softs, 0.2s behind teammate Vettel.

Red Bull's Max Verstappen was fifth quickest, one second off the pace, ahead of Sergio Perez and Fernando Alonso.

Alonso continued to run Honda's updated power unit, but the plan is to revert to the older engine for the remainder of the weekend.

Lewis Hamilton
That was a good day today. No issues to report and we got through our run plans in both sessions. There's a lot of data to analyze tonight to make sure we have a good understanding of the tires and of our position relative to the others. Overall a good building block for tomorrow and the rest of the weekend. A big shout-out to the fans out here today. I saw them waving across in the stands at the end of FP2 and they've all got banners and caps showing their support, which is great to see.

Nico Rosberg
The new track surface is really enjoyable to drive. Challenging, but with good grip. It's tough to get the setup right with such an unknown element as new tarmac, but we're on the right track. Turn 15 is interesting, as you can now try several different lines if you're attacking the guy in front, so that will be good for overtaking. Looking at the race, even the soft tire held on pretty well out there, so we don't expect any big surprises. Strategy-wise we have to run the hard compound, of course, but otherwise it's pretty straightforward. I'm looking forward now to qualifying.

Paddy Lowe, Mercedes Executive Director (Technical)
Very hot conditions here today. We've been doing our normal race preparation. The strategy is completely open for Sunday between the soft, medium and hard tires, so we evaluated all three compounds across both cars on high fuel and low fuel. Both drivers were reasonably happy with the balance of the car. No issues save a bit of gravel clearing on Nico's car after his minor excursion this morning. A lot of data to analyze tonight to see where we are competitively and decide what's the best way to run the race. Now we look forward to qualifying tomorrow.

MAX VERSTAPPEN
Formula One is where I always want to be so it’s nice to spend my birthday here. I can enjoy some birthday cake because it’s so hot at Sepang I’ll lose the kilos anyway. Both sessions were pretty good. The first practice you just had to build up to it, especially with the new tarmac, you have to get to grips with the car. I enjoyed the new surface, it seemed to have quite a bit more grip. Before, in Malaysia, we seemed to struggle with traction but the changes they have made here appear to have helped. I also think it is a lot more fun to drive. Our short runs need to get a bit better but the long runs are looking strong. The pace on the soft tire felt decent, I feel like that tire has potential on a long run and it allowed me to throw the car into the corners like I wanted to. It’s hard to tell where other drivers are on the first day but Sebastian (Vettel) looks strong, so we need to improve our short run in order to be competitive.

DANIEL RICCIARDO
The new asphalt is good, it gives a bit more grip which is always fun, though I don’t think I found as much grip as the others. We still have to find a little bit of time on both low and high fuel. We didn’t really find a big gain with the soft tire on low fuel, so that’s one thing we want to address. We’ll do a bit of work tonight and definitely make some improvements for tomorrow. The last corner is not the most attractive on the calendar but it’s challenging so I guess that’s positive. If you take the inside it sort of washes you away with the negative banking, and if you go around the outside you end up doing a lot more distance, so it’s about trying to find a good compromise and making it mistake free. Track temperature was, I think, recorded at 61 degrees, I’ve never heard a number that high before. It was pretty warm and toasty out there. I think Sunday will be good fun, we just have to keep hydrated and it should be a good challenge.

Romain Grosjean
It was a difficult practice this afternoon. We just couldn’t find a balance in the car. It’s frustrating. I wasn’t happy with the car, but we just need to put our heads down and come up with a solution before tomorrow. If there’s a positive, it’s that we got some laps in this Friday, but there’s a lot of work to do to improve the weekend.

Esteban Gutierrez
It was a very productive day for us. The track is very interesting. It’s extremely smooth, which is changing the way the tires are working and the setup of the car. We’ve been experimenting a little today to learn everything we can about how the car is performing here. We’re progressing well and, hopefully, we’ll be able to extract the maximum from our setup, which is the most important thing we’re focusing on. Tonight we’ll be going through all the data to see which direction we need to take to perform the best we can during qualifying.

Rob Smedley, Head of Williams Performance Engineering: It was a fairly normal Friday apart from the fact that we lost some time with Felipe on his set of hard tires which, in the end, we couldn’t run due to an issue on the rim. Apart from that, we got the low fuel work done on the soft tire which was important, and some running on high fuel for the soft and the medium compounds. Between the two drivers, I think we’re quite consistent. Clearly the track has changed a lot with the new asphalt. It’s a lot smoother, less bumpy and generates more grip. There’s definitely less degradation, which is good – but it’s the same for everyone. We need a little more understanding of where the tire temperatures need to be on this new asphalt as the requirements on the front and the rear are quite different. We’ve done all the work we needed to do today and we now just need to look at what we’re going to do to get a bit more pace out of the car. We’re not far away from where we should be. We’re expecting the same weather and temperatures for the start of the race, so today is pretty representative of that. It should be a little cooler for qualifying with that being later in the day. It was 60C at the start of FP2 today. That obviously makes it quite difficult to manage the tires. Our main focus tonight has to be to get the cars balanced to protect the rear tires and to get reasonable balance for the race.

Valtteri Bottas: Today was a pretty standard Friday. We got plenty of data and it was interesting to understand how the new tarmac would affect this year’s car. It definitely provided more grip. The tires were also behaving more consistently than in previous years. The long runs were especially interesting today but the feeling was positive and we got some good data from them. We still need to improve our one lap pace, but the overall feeling is OK.

Felipe Massa: Unfortunately, we didn’t do what we were supposed to do today. I had to abort a few laps as we had an issue which lost us some time, so it wasn’t a straightforward afternoon. The pace also wasn’t fantastic compared to others, so we have work to do tonight to hopefully have a better Saturday.