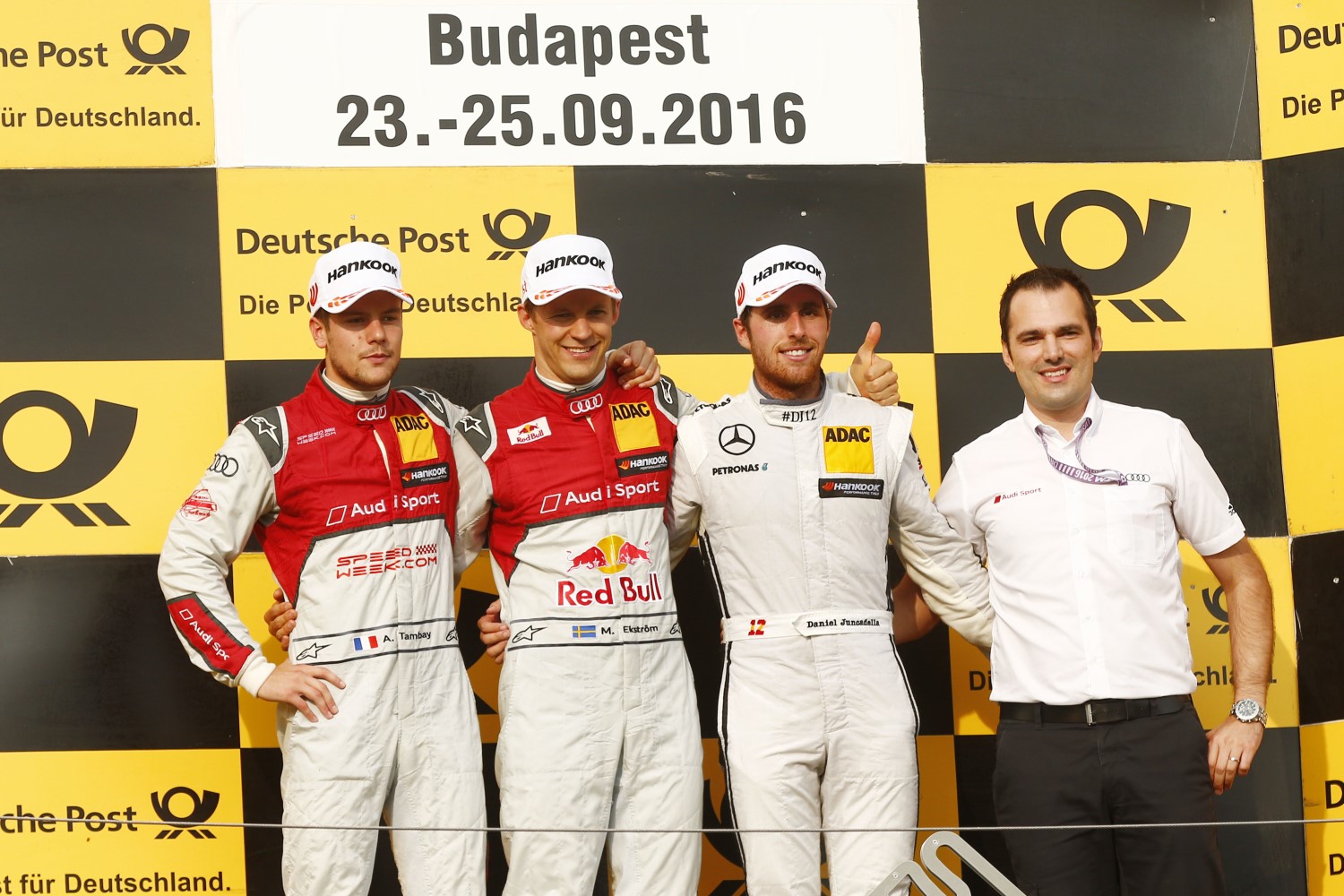 Marco Wittmann and Daniel Juncadella had their positions in the Sunday race at the Hungaroring taken away. Following a report from the technical delegate, the stewards of the meeting came to the conclusion on Sunday evening, that both Juncadella’s Mercedes-AMG C 63 DTM and Wittmann’s BMW M4 DTM didn’t comply with the technical regulations. The height of the skid pad (underfloor) of both cars was insufficient (art. 3.22.4 of the technical regulations). After the exclusion, the next drivers move up, so that Antonio Felix da Costa was promoted to third.

Thus, the duel for the title in the DTM finale at the Hockenheimring Baden-Wurttemberg again becomes a three-way fight. After the decision, Wittmann had the twelve points he had scored for finishing fourth on Sunday taken away. Prior to the finale, he now has 176 points to his tally. Edoardo Mortara is second in the drivers’ standings, 14 points down. And now, Jamie Green also remains in contention for the DTM title as he is 39 points down, with 50 points still at stake in Hockenheim.

Both the Mercedes-AMG DTM Team HWA and the BMW Team RMG have announced an appeal against the decision of the stewards. Until the appeal court has drawn a verdict, Juncadella and Wittmann remain excluded. The result of the 16th DTM race of the season as well as the drivers’, teams’ and manufacturers’ standings remain provisional.

09/25/16 In the 16th race of the 2016 DTM season, Mattias Ekstrom has shown that he is by no means an oldtimer yet. The Swede, who won the DTM championship titles in 2004 and 2007, scored a dominant win in the race on Sunday from his fellow Audi driver Adrien Tambay. After 36 laps, Ekstrom crossed the finish line 4.350 seconds ahead of the Frenchman and scored his first win of the season, the 22nd victory of his career in the DTM.

"Today, I had a fantastic car and I didn't have to work hard for this win at all," the Swede said at the finish. "Usually, I had to fight really hard this year and I wasn't rewarded at the end. Today, it was different." At Budapest, Mercedes-AMG driver Daniel Juncadella took the checkered flag in third place. For Tambay, second place was his first podium finish since the 2014 season opener. Juncadella was on the podium after a DTM race for the first time ever. In a race with a turbulent start, Marco Wittmann finished fourth and thus extended his points' lead again. Over the race weekend, 39,500 spectators attended the DTM event in Hungary.

While Ekstrom drove an undisputed lights-to-flag victory home, for Edoardo Mortara, Jamie Green and Robert Wickens, the race was almost over before it really got started. Wickens initially lined up at the wrong side of the starting grid and had to start from the back of the grid after an additional formation lap. Pole sitter Mortara had a poor start and had to defend his position from Wittmann on the first few meters. In the process, he damaged his Audi RS 5 DTM. Wittmann and Mortara were given warnings for the collision and an additional pit stop ruined the race for the Italo-Swiss. Jamie Green also became involved in the collision and retired early in the pits.

Prior to the DTM finale at the Hockenheimring, Marco Wittmann is leading the DTM drivers' standings with 188 points from Edoardo Mortara. The latter has 162 points and, 26 points down, is Wittmann's only remaining opponent in the battle for the season trophy. After this weekend, Jamie Green (137 points) and Robert Wickens (121 points) are no longer in contention for the title.

"I didn't have a good start. Subsequently, I was sandwiched between Wittmann and Green. One of the rims broke in the process and I had to take a few more hits on lap one," said Mortara. "That's very disappointing because we could have won again today."

"It was a real shame," Dieter Gass, Head of DTM at Audi Sport, agreed. “It's extremely frustrating not to be able to feel really happy in spite of a one-two result. Today, we could definitely have achieved more. We had fast cars. That was obvious also with Mattias (Ekstrom) and Adrien (Tambay). The situation at the start was extremely unfortunate. You can't really blame anyone either. Edo (Mortara) had a little too much wheel spin. That's what set off this unfortunate chain of events. That, of all people, it resulted in our two drivers with the best points score being taken out of the race is frustrating."

The DTM season finale takes place at the Hockenheimring Baden-Wurttemberg from October 14-16.