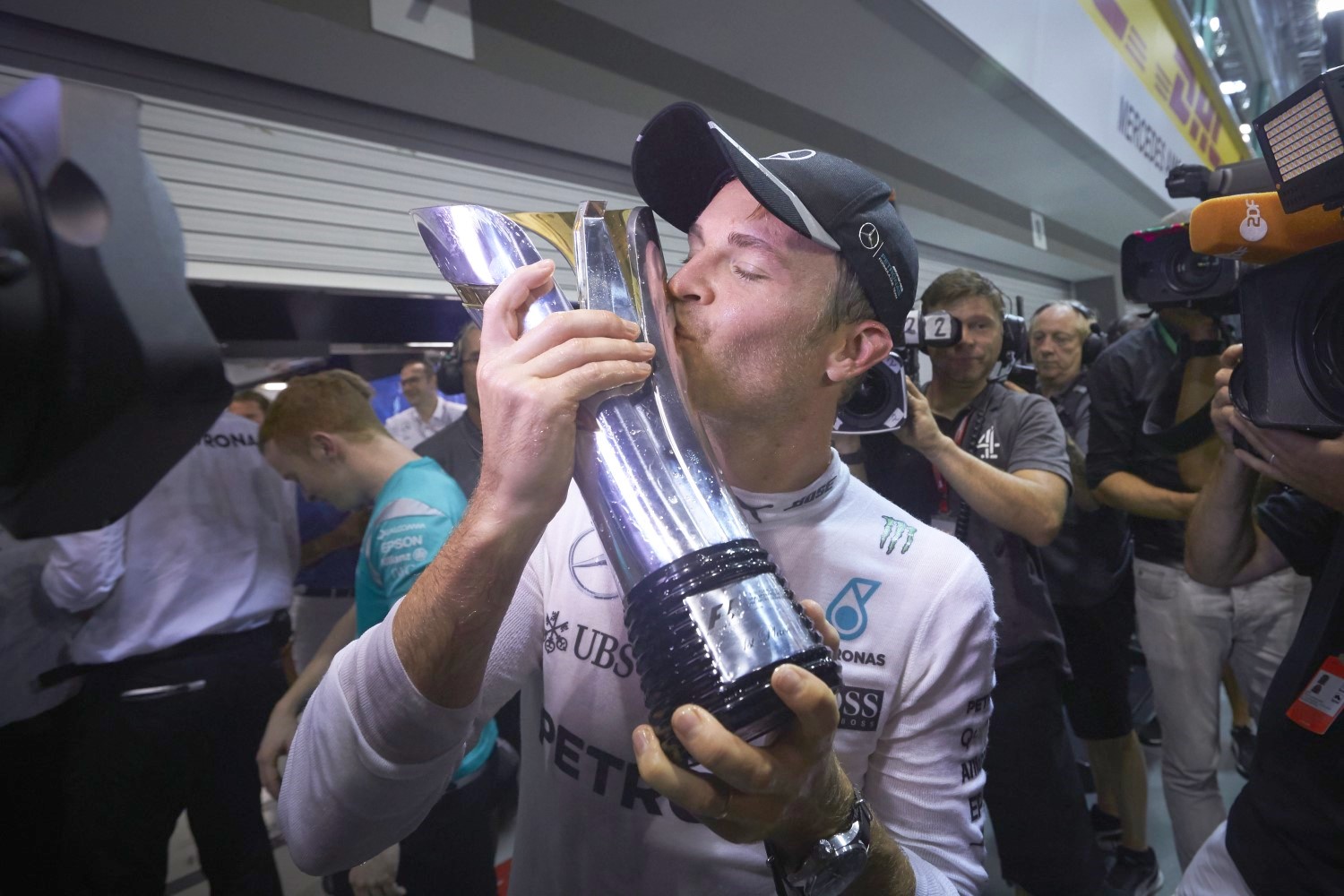 F1 paddock ponders Rosberg as 2016 champion
(GMM) The F1 paddock is musing the possibility that Nico Rosberg will be crowned the sport's next world champion.

His teammate Lewis Hamilton has won the last two titles, but it is the sister Mercedes driven by Rosberg that has won three grands prix on the trot.

"Rosberg's exceptional character is perfect for the duel against Hamilton."

France's L'Equipe agreed that Hamilton has been "a shadow of himself" at recent races.

"Rosberg is at his best," added Italy's Corriere della Sera, "while Hamilton is sinking in crisis."

And plenty of other observers also think Rosberg recapturing the world championship lead in Singapore may have been a turning point.

"I can see him (Rosberg) being the new world champion," he added.

The German newspaper Bild agreed: "Since four weeks of partying in the summer break, Hamilton has won no more races."

On Italian radio Rai, Flavio Briatore said: "Rosberg seems to have put his head in the right place.

"Hamilton has great talent, but he is a bit 'rapper' too and if you want to win you have to concentrate on that.

"If I were him, I would look a little less at music and a little more at F1," the former Renault chief added.

And former F1 driver Robert Doornbos told Ziggo Sport Totaal: "I don't know what Rosberg did in the summer, but he must have found something in himself.

"He may have slightly less raw talent than Hamilton, but he fills that gap with hard work."

Mercedes team boss Toto Wolff, however, said the recent trend should not be overstated.

"We tend to talk one up and the other one down," he insisted. "I remember talking about Lewis' momentum a few weeks ago and suddenly we have this mega Nico weekend.

"We will see if it stays the same in Malaysia."

Ferrari must open base in England – Briatore
(GMM) Sebastian Vettel is struggling amid the current situation at Ferrari, according to a respected Italian journalist.

"Frankly, despite the comeback (in Singapore), Seb is not at all convincing," Giorgio Terruzzi said.

"I don't know why, but he seems a little lifeless."

Ferrari and Vettel started the season high in confidence, but it is the cool Finn Kimi Raikkonen who seems the least disturbed at present.

"I've said it for years, that while Ferrari has always been a great manufacturer, it must have a technology antenna in England," he told Italian radio Rai.

"They won when they took 12 engineers away from me at Renault, so I would put a nice building in the middle of Red Bull, McLaren and Williams," Briatore added.

Briatore also talked about the F1 takeover by Liberty Media, saying the deal for now is "very strange".

"They have paid only 700 million, the rest of the money will be when changes are made but no one is talking about the F1 product," said the Italian.

"Among the teams there will be a showdown, everything is to be reviewed but nobody cares about an F1 that no longer attracts and has strange rules that no one understands," Briatore added.

"It's not a good platform when only one team wins and all the others lose. There are only three teams: now it's normal for Vettel to finish fifth from the last row.

"In my opinion, the Americans should open their wallets and try to fix the product. After that, they need to keep Bernie (Ecclestone)," he said.

Alonso eyes 'title fight' for McLaren in 2017
(GMM) Fernando Alonso is still targeting a tilt at the 2017 world championship.

That is despite the fact that he is also saying next year could be his last in formula one, as he recoils from a category that he says was once so much more exciting.

Alonso told the El Larguero programmed on Cadena Ser radio that the main problem is cars that are "less demanding" than ever.

"The cars are less attractive," he admitted. "There is less of a feeling of speed. It's about saving the tires, saving the fuel.

"If F1 is to be more saving than attacking, I will think if I will continue," said Alonso.

In the meantime, McLaren-Honda has been making steady progress this year and Alonso is not even ruling out a sneaky podium in the final six races of 2016.

And he said that if that progress continues, McLaren will be in a "strong" position next year. "The aim next year is to be in the fight for the title," he confirmed.

Turning his attention to this year's title battle, Alonso said he thinks it could ultimately come down to "reliability" between Mercedes duo Lewis Hamilton and Nico Rosberg.

Kvyat 'passion' back to normal in Singapore
(GMM) It was a tale of reverse fortunes for two drivers on the Singapore grid last weekend.

Daniil Kvyat has had a horror few months in the wake of his Red Bull demotion, struggling to regain form, confidence and passion at the junior team Toro Rosso.

But in Singapore, he had a breakthrough.

"I loved the race," the young Russian beamed, according to Brazil's O Estado de S.Paulo newspaper.

"I feel the passion again and think I'm back to normal. These months have been a great test for my passion and I pushed until the last centimeter," Kvyat added.

On the other side of the coin in Singapore was the ill-handling and crash-strewn weekend endured by Romain Grosjean.

"From the beginning, I could not do laptimes similar to those of my teammate," he told the French magazine L'Equipe, referring to fellow Haas driver Esteban Gutierrez.

Grosjean said he hopes things improve for the next race in Malaysia, insisting to the French broadcaster Canal Plus: "It can't get any worse."

Based on information from the Spanish dailies ABC and Marca, and repeated by Britain's Telegraph, we reported earlier that the Ferrari chief was in custody for six hours and fined 1000 Singapore dollars.

The city-state's stance on street littering is infamous, with stringent enforcement and harsh penalties in place for infractions.

"Reports in the international media on this matter are bogus," the agency reportedly said.

"That's really more a reflection of the global environment in terms of economic uncertainty and so on," government minister S Iswaran is quoted by the local Today publication.

"It's a little bit like in 2009, when you had the global financial crisis," he added. "There was a major correction and then it went up again quite strongly."

Rosberg revels in Mercedes turnaround
Nico Rosberg has hailed his Mercedes team after he claimed victory from pole position in Singapore, 12 months on from being "absolutely nowhere" around the streets of Marina Bay.

Mercedes has dominated the sport since the start of 2014 but suffered an anomalous off-color performance in Singapore last year, when it was outpaced by Ferrari and Red Bull.

Since Mercedes was defeated in Singapore last season it has won 20 of the 21 Grands Prix held, beaten only when Rosberg and Lewis Hamilton collided on the opening lap in Spain.

Mercedes was braced for a stern challenge from Red Bull and Ferrari in Singapore but secured a double podium finish, with Rosberg triumphing and Hamilton placing third.

"They extract the potential from the best car, from every weekend, changing the car, adapting to the new circuits, to the different circuits and understanding.

"Because last year we were absolutely nowhere [in Singapore].

"We got destroyed by Red Bull and Ferrari and we understood what we did wrong and came back this year and beat them on their strongest track.

"That's really awesome to see that."