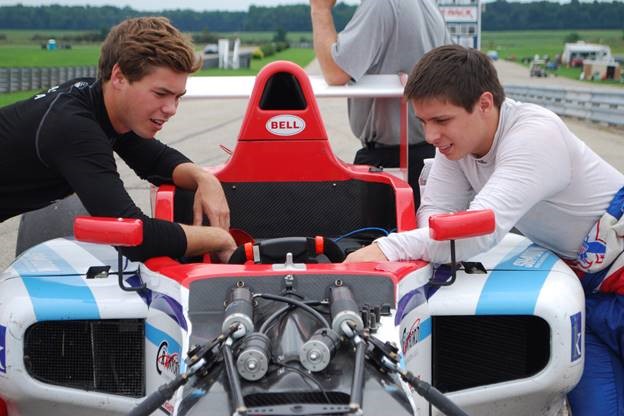 As the Formula 4 United States Championship Powered by Honda points race narrows, teams are deploying all of their resources to make their cars faster.

"It's a fantastic race car for the young guys making that first step from karting to the open-wheel category," Chaves said. "The F4 car has just the right amount of power, it's quick in a straight line, has great braking force and has just enough aerodynamics to get the drivers a taste of what it takes to drive a proper race car. The Honda engine performed flawlessly all day. It was a blast to drive."

Chaves, 23, analyzed the two F4 U.S. cars behind the wheel over the two-day period, working with GMV Motorsports engineers to create the ultimate setup for the next F4 U.S. event at Road Atlanta in Braselton, Georgia, on Sept. 16-18.

"Having Gabby test with us really helped us as a team," Miller said. "He jumped in the car and within two laps knew exactly what the car was doing. He gave us feedback that allowed us to make the car about second and a half faster. We are looking forward to Atlanta."

"Testing with Gabby was awesome," Kaszuba said. "It's amazing how much you can learn from somebody who already went through the ranks and has a lot of experience with cars. Gabby gave me a lot of advice throughout the session. I feel like I have already improved just by working with him this weekend."

Michael Goodyear of Carmel, Indiana, the pilot of GMV Motorsports' No. 4 car, was unable to attend because his college schedule conflicted with the team test. Goodyear has entered to compete at Road Atlanta.

"I was disappointed to miss the New Jersey F4 race event and team test with Gabby, but the agreement with my parents is that school comes first." Goodyear said. "I am beyond excited to participate in Event 4 of the F4 U.S. Championship at Road Atlanta with the new car set-up. I would like to thank Jack Miller, my dad Scott Goodyear, Gabby Chaves, the entire GMV Motorsports team and all my sponsors for their support. I can't wait to hear that Honda engine roar again!"

GMV Motorsports will put its adjustments to the test starting this Friday at Road Atlanta as they try to edge out their competition. Kaszuba stands 11th in championship points and his teammate Goodyear is right behind him in 13th. F4 U.S. Championship competitors need to place in the top seven to earn super license points through the Federation Internationale de l'Automobile (FIA).

Fans can watch a video of Chaves behind the wheel at F4USChampionship.com.