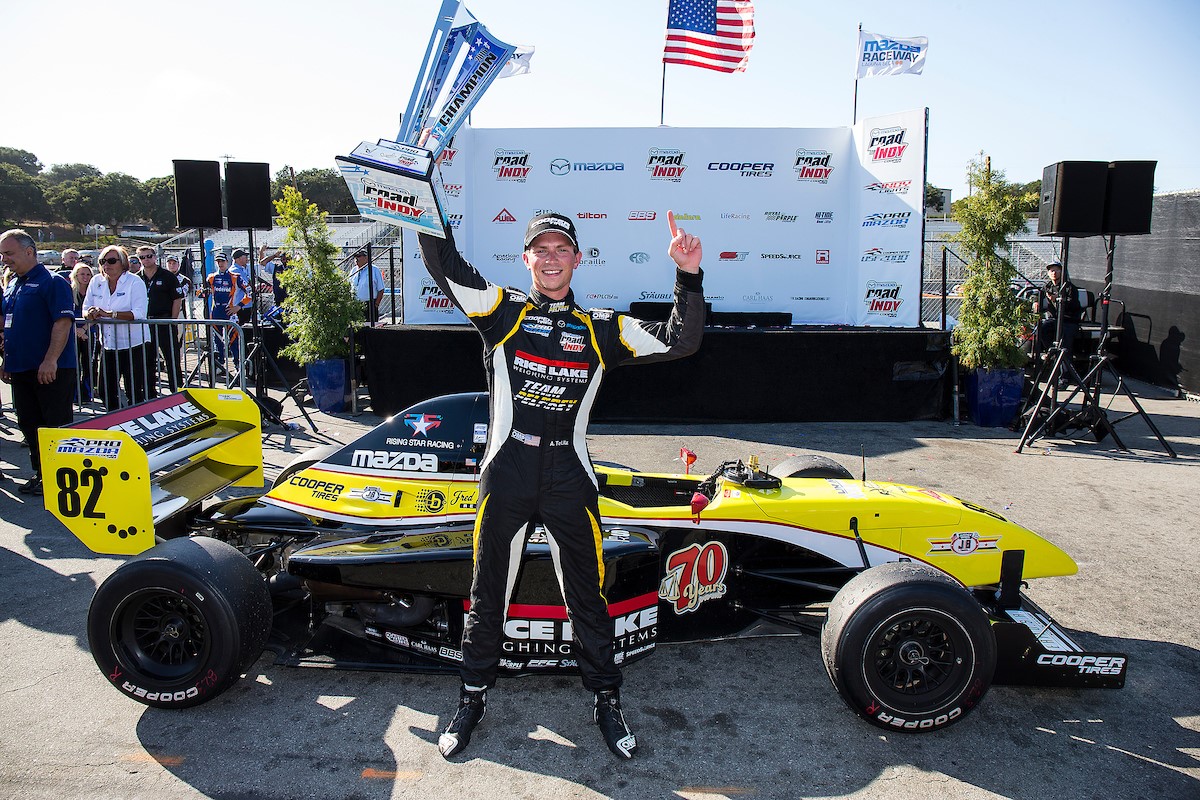 Earlier this morning, Telitz and teammate Patricio “Pato" O'Ward clashed while disputing the lead, which allowed Argentinean rookie Nicolas Dapero through to claim an accomplished maiden victory for Juncos Racing ahead of teammate Will Owen and Nico Jamin (Cape Motorsports with Wayne Taylor Racing).

The final encounter was less eventful as Telitz led from start to finish, with Owen and Dapero rounding out the podium.

The triple-header Pro Mazda Grand Prix of Monterey Presented by Allied Building Products continued this morning with a make-up race from Iowa Speedway, with Telitz and O'Ward lining up on the front row of the grid. They were separated by just eight points with two races remaining.

Telitz got the initial jump but O'Ward fought back at Turn Two, driving bravely around the outside until the pair made contact at the exit.

O'Ward's car pirouetted in the air before landing heavily, breaking its left-rear suspension. As the young Mexican headed for the pits, Telitz continued in the lead… until being assessed a drive-through penalty for initiating the contact.

Dapero, 18, inherited the lead and quickly extended his advantage over the pack. His lead was erased by a full-course caution after 13 laps when Californian TJ Fischer (Team Pelfrey) tangled with Australian Jake Parsons (Juncos Racing) in the Corkscrew while disputing second place.

Dapero expertly held off his more experienced teammate Owen, from Castle Rock, Colo., to take the victory, with Jamin, the winner of last year's Cooper Tires USF2000 Championship Powered by Mazda, in third.

Telitz eventually finished fifth, with O'Ward recovering to sixth in the Championship Class following a lengthy pit stop for repairs.

The championship remained in the balance prior to the final race, with Telitz holding a 10-point edge. Starting from pole for the fourth successive race, the Wisconsin native held off O'Ward's challenge at the first corner and immediately put his head down, trying to establish himself in the lead. His ploy was successful. After remaining close for the first half-dozen laps, O'Ward began to drift back and into the clutches of Dapero and Owen, who were continuing their battle from earlier in the day.

Telitz continued to turn a series of consistently fast laps to clinch the title in the best possible manner, while O'Ward's already slim hopes evaporated completely when he strayed off-course in the Corkscrew on lap 21, bending his car's rear suspension. One lap later, a slight slip in Turn Two by Dapero allowed Owen to pounce into third place, which became second shortly thereafter as the hobbled O'Ward slipped down the order.

Owen, who earned the Quarter Master Hard Charger Award after starting fifth, turned up the wick in the closing stages to finish just over a second behind the jubilant Telitz, with Dapero rounding out the podium in third. A disappointed O'Ward trailed home in sixth.

Aaron Telitz (#82 Rice Lake Weighing Systems-Team Pelfrey): “When I was coming across the line, I was thinking about so many things! It's unbelievable. I don't come from a racing family or a racing background so to be here, winning the Pro Mazda championship and getting to drive an Indy Lights car next year is just amazing. It's all thanks to the Mazda Road to Indy, where you have a stepping stone to every level and you don't get confused, you don't wonder what you should do the next year. It's really been a difficult season; Pato has done such a great job. It's hard to give someone racing room but know that you've got to beat that person to win the championship. You're both going to go for the same spot and you're going to have tangles like that. I'll enjoy this tonight and I'm sure I'll have lots of Indy Lights teams to talk to tomorrow!"