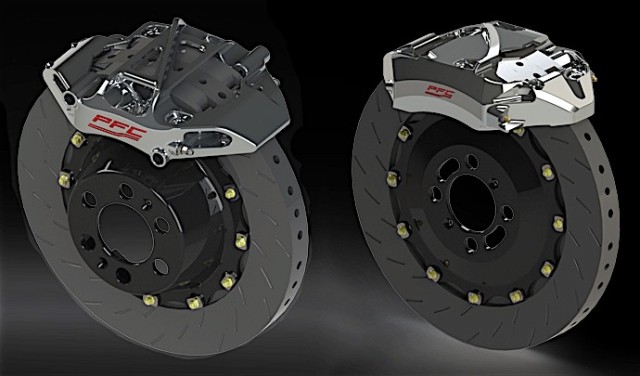 It's often said that motorsports is the ultimate crucible of research and development for automotive parts and platforms. When you go to purchase an aftermarket part, or system of parts, certain expectations are made. The companies that can best deliver on those sorts of demanding expectations take their testing seriously writes Trevor Anderson of Turnology.

In the case of Performance Friction Brakes (PFC), racing has been in their business model from the beginning. Braking technology has come along way in the latest generation. As composite materials have all but replaced ferrous rotors, and brake pads have gone full carbon among top level motorsports. This technology has trickled down into the hands of the commercial market.

"We started working on carbon back in 2004, and we actually had our first race at the 24 Hours of Lemans with a GT1 Saleen. We realized we were onto something pretty special," Darrick Dong, the Director of Motorsports for PFC told us.

Before the days of carbon brakes, PFC founded relationships with top racers across different series."In 1984 we started building racing products as part of one of our business models at the company. In 1984 Jeff Bodine won Martinsville, VA in the first race that we had produced a brake pad, and it was also the first race for Hendricks Motorsports. By 1996 we had pretty much 100 percent of the NASCAR teams on our brake pads," Dong recalled.

"In 1986 we started working with Penske and Newman-Haas during the old CART days, our products were used by those teams to win their respective championships. From 1986 to 2008 we had won all the IndyCar, Champ Car and CART national championships, so we have been a player in IndyCar for many years."

IndyCar racers are thoroughly familiar with PFC, the first year (2002) they introduced their discs and pads to the Champ Car series, by the end of the year, 100 percent of the field was using the product, even under an ‘open' rule condition.

For the 2017 IndyCar series, all competitors will race on PFC carbon brakes. But this partnership is not the result of a simple business agreement. The racers themselves have spoken to the quality of the PFC products.

"They opened it up to a blind test, this past year at Mid-Ohio, it was three other manufacturers. In the blind test they wouldn't tell the drivers whose products they were on, only that this is a brake test sanctioned by IndyCar. IndyCar gave the teams an extra set of tires to do this test specifically," Dong outlined.

The carbon brakes being employed with the IndyCar series represent the cutting edge of carbon technology. Dong elaborated on this concept for us saying;

"The carbon is quite a bit different, in it's matrix, from the current carbons that are used in automotive racing. For the most part, the stuff that's used in automotive racing is basically declassified, ex-military specification. It's a legacy material that the current carbon suppliers can freely talk about because there's no national security wrapped around the technology."

"The technology is unique, you'll see that most of the carbon products out there looks like a biscuit or a laminate, where they needle the laminate together, whereas if you look at our carbon it's made from one continuous, single-element strand."

"For lack of a better term, if you could consider carbonizing a Brillo Pad, that's basically what the matrix looks like. By having a single strand of carbon, the crystalline structure is far more uniform, and less apt to have broken linkages. This has a lot of benefits in terms of uniform temperature distribution, torque distribution, and primarily the reason we got into this technology was the cold-bite characteristics."

Temperature ranges are a very important consideration when assembling a brake package for a car. Whether it's a street car that sees track time, or a full racecar. Depending on the usage, the operating range for the brakes may vary from ambient temperature to very hot. Carbon brakes have become known for this sort of sensitivity even more than conventional iron.

"Carbon typically has a reputation of being very sensitive to temperature. Current carbons now can have as much as double the coefficient of friction or the torque output with temperature. With our product it doesn't do that, it's very linear. It does have some friction rise with temperature but it's nearly at the rate of current materials and it starts off at a higher rate. From IndyCar's standpoint, cold-bite is very important because of the oval tracks," Dong explained.

Outright friction coefficient is not the end-all-be-all measure of a braking systems performance. Modulation of brake application is very important for the kind of smooth driver inputs required to make fast laps. Modulation with the PFC carbon brakes is one area in which Dong was particularly proud of the technology.

"Modulation is superior, during the tests a lot of the cars were using the largest master cylinders they could get their hands on to reduce locking. With PFC's brakes they we able to go down a size with master cylinders because the pedal would have more feel in it," he continued.

"Because of it's cold-bite characteristics this would be a perfect product for the commercial market, I don't know when that day will come, but right now it's all we can do to make sure we're ready for the 2017 season for IndyCar."

"For your normal consumers, the ideal thing is the technologies to build a carbon-metallic brake pads are in the technologies that we're using to evaluate carbon for IndyCars," Dong concluded. Trevor Anderson/Turnology.com