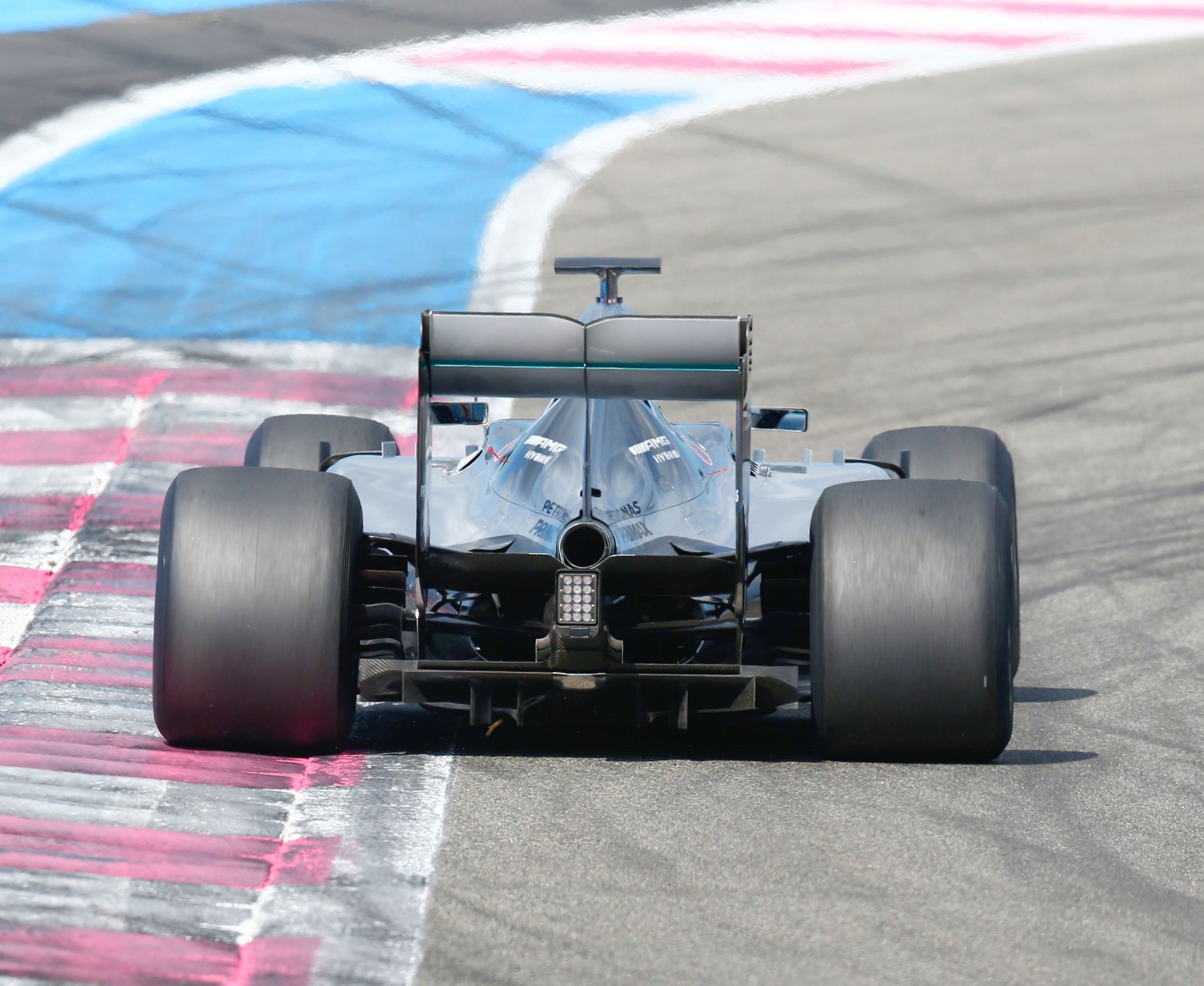 With a raft of changes planned for 2017, one of the most important and visually striking will be to the tires. Pirelli will introduce wider tires front and rear with the hope they will allow drivers to push for longer without the risk of severe degradation.

Grand Prix Times' Graham Keilloh sat down with Pirelli's motorsport boss Paul Hembery in Monza to get the lowdown on 2017, amongst other things.

Q. You’ve got new tires coming in for 2017, how’s the development for those going?
Paul Hembery: We’ve obviously had the initial testing that we did in Fiorano in the rain and Mugello in the dry. This week we’ve got three days with Mercedes at Paul Ricard and two days with Ferrari at Barcelona.

We’re clearly progressing rapidly along the development path, we don’t have a lot of time, we don’t actually have that many days’ testing for the significance of the change that's happening. We’re hopeful that the aero loads we see during these tests will be higher than we saw in the initial tests.

It’s not easy for the teams, they’ve had to prepare a car in a very short space of time, and using a made up regulation in essence to try and replicate the downloads of next year’s regulations. So it’s a hard situation and the teams I know have given us maximum support, which we’re hugely appreciative of.

But the aero loads have a big impact on how the product works, how the compounds work, how the structure works, so we’re hopeful this week we can do some significantly good screening of the development program.

Q: You said just now about a lot to get through in a short space of time, are there particular concerns?
PH: Not yet – ask me that in November I might have a different point of view. Certainly at the moment we’re moving in a certain direction. It’ll take some time to get all of the factors put into one product because we’re doing a lot of work on structures, profiles, materials, compounds, so we’re certainly not testing products that are close to what will be the final product, but it’s part of a phase of confirmation of indoor testing – drum testing that we do – in a real car environment.

Probably we won’t know the true performance of the tires in every sense until we get to the pre-season testing.

Q: From your point of view is it mainly more testing that you would like? Is that the main issue?
PH: Well it’s not, the reality is that the amount of work you have to get through to produce the product in the timescales is substantial. I wouldn’t say it’s that we need more testing, I think the level that we have is reasonable. I’d be surprised if we had everything right first time because there’s a lot of variables that are out of our control. What we have to do though is deliver as close as we can to the guideline letters that we have for the product specification. We’re confident we can get very close on many of the parameters that we’re being asked to do.

Q: It’s been reported in the press that, drivers have been complaining about when they overheat the tires it’s hard to get them back, and next year’s tires will try to make it a bit easier to nurse them back, is that something that you’re looking at?
PH: That is an area we are looking at, to make the temperature sensitivity less, and that is one of the prime objectives. So we are looking at that.

And certainly from the testing we’ve done we feel that we’re in an area of potential reduction, substantial reduction, in degradation. But in reality you won’t really understand the level that you've got until you get on a car that's very close to [that for 2017], because even if you get the aero loads right we’re not going to get the engine that they’re using now. So some of the performance you’ll only see when we get to winter testing.

But it’s true that we are trying to reduce the thermo-sensitivity. The idea is that at the moment that there’s quite a lot of turbulence from the wake from the car in front, that disturbs the area of your own car, and that then puts the tire into a situation where it starts to over-heat. When it’s over-heated then the drivers can pull it back.

We’re hoping as well to have less wake, so less disturbance to the air of following cars, combined with a tire that’s less thermo-sensitive, that packaged together will allow the drivers to push harder against the cars in front. That's the theory.

Q: So next year too is the tire going to be designed to let the drivers push for a lot longer?
PH: Well, we hope so. Although the data suggests the performance in the corners is substantial. A number in say Barcelona, maybe three corners, are going to be flat out. So if you’re flat out then I would guess that overtaking is going to be quite hard.

Q: We do hear over the years a lot of drivers being quite publicly critical of the tires. What do you and Pirelli as a company, how do you react when you hear them ‘washing dirty linen in public’, it might be described as?
PH: It’s disappointing, because we were asked to do a certain work, we were following what we were told to produce to assist Formula One. Indeed you’ve had years of the most overtaking in the history of Formula One. The drivers wish to have something different, [this] is what was taken into account with this generation of product.

Maybe the sport could have asked the drivers what they wanted a bit earlier, and then we could have had a testing programme over the last three years. We’ve had one day’s testing in three years, so we were very compromised.

I think sometimes it gets lost a little bit the constraints within which we’ve been working. It’s not to say that what they’re asking is incorrect. Indeed we’re very happy that they’ve had a good input into what we’re doing in the future going forward.

Q: You must report back to Pirelli and people you report to there, I always think F1 must be very difficult to explain to people on the outside, do you tend to find that problem?
PH: Certainly it’s a complex sport on many levels, yeah. Normally in business you decide if you have a problem you decide what it is and then you put a plan of action in to resolve it. It’s not all that straightforward in Formula One.

Q: Talking as well about the spec that was in place that you were following, where did the drive come from, was it mainly Bernie Ecclestone?
PH: No, when we came into the sport there was a working group where all the teams were involved, and they told us what they wanted. Interestingly they told us not to increase cornering speed – which is now what we’ve been asked to do, so there you go! That’s how things change with time!

Q: Another thing that in Spa was suggested that the Mercedes were having particular problems with overheating of the tires and that was related to that they have more downforce and more power than their rivals, and the suggestion is that the supersoft especially is almost an artificial leveller. Do you think that is true?
PH: They got pole position, they came first, and Lewis [Hamilton] started from the back and ended up on the podium. It doesn’t look like they were suffering that much.

Q: Is it something that’s come up before as a criticism that perhaps, presumably unintentionally, that people are almost driving to the tires and that does level things?
PH: It’s the same for everyone. If you’re going to win a race you’ll have the same tires as the person that comes last. So of all the components – thousands of components – and variables you’ve got, at least you know that the tires are the same. So if you aren’t winning you need to look somewhere else.

Q: Another subject is that this race and last race we’ve seen a new test compound, we’ve seen some running. There was some suggestion this morning that it was to be perhaps introduced for Malaysia but the behavior [compared with] the previous tires wasn’t quite as consistent and that was causing trouble?
PH: It was something we were looking at for next year, we thought that if we could introduce it transparently this year we would, but there are some areas we need to still analyze. At that point we won’t be introducing it.

Q: Any particular areas that are causing a problem in terms of introducing it?
PH: Well, we won’t introduce it. That’s why it needs to be transparent. We felt it should by and large be transparent so we felt if it was then we could have introduced it. But it’s not the case.

Q: The main thing was to get behavior similar to before?
PH: It needed to be identical.

Q: So what in particular was different?
PH: It wasn’t the same. Grandprixtimes.com